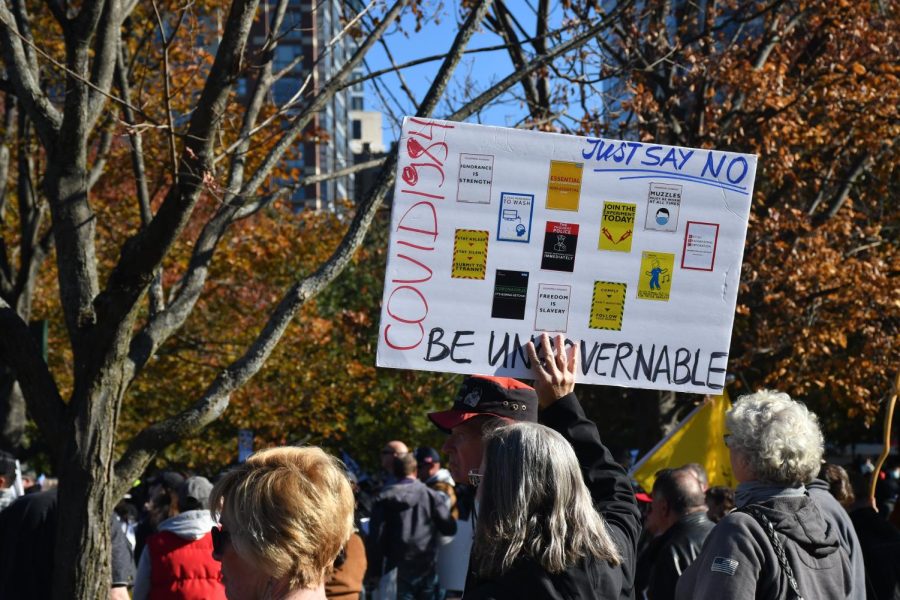 By Shannon Garrido and Lucia Thorne

Life gets you down sometimes, and that’s understandable. But if you ever feel worthless or unwanted, just remember this past Sunday, a group of what are clearly very “well-rounded” individuals gathered to shout about conspiracies in a public park by an Earl of Sandwich, only emphasizing how repulsive they are and getting even fewer people to sleep with them.

If you were anywhere in the vicinity of Boston Common this past Sunday, there’s no doubt you heard the obnoxious racket that was the Super Happy Fun America public tantrum––sorry, “protest.” This was nothing more than a sad demonstration of “patriots” crying about getting a little needle put in their arm amongst other things. These protests obviously spread misinformation as groups like these are known to do, and can only be considered a pathetic and embarrassing display of stupidity.

Not to mention the boldness of protesting in one of the most vaccinated states (and counties) in the U.S., with a respectable seventy percent of Massachusetts fully vaccinated according to the U.S. Centers for Disease Control and Prevention. Add that to planting a known homophobic organization in front of one of the most LGBTQ+ friendly campuses in the country. They were bound to receive more backlash than support.

As expected, a much larger counterprotest group showed up to make enough noise that they drowned out the anti-vaxxers. Coming prepared with a band and decked-out signs, the counter protesters’ chants and props were enough to make the anti-vaxxers feel like their rights were being “violated,” convincing them of their “victimhood.”

Remember, these are the types of people that think the U.S. is Panem, that public health initiatives are the Hunger Games, and the unvaccinated are Katniss Everdeen… you know, conservatives missing the whole point of books that criticize their beliefs, as per usual.

The protest, dubbed “Rise Against Tyranny” by its organizers, aimed to fight the expanding restrictions facing those who choose to remain unvaccinated across the U.S. From unpaid leave for New York Police Department officers and the firing of healthcare workers to the inability to receive organ transplants,––all of whom have chosen to not get the vaccine––the tolerance for the unvaccinated-by-choice is wearing thin, and understandably so. Their ignorance and entitlement are costing hundreds of thousands of lives.

The rally, which began at noon, led to fights breaking out almost immediately. According to NBC Boston, protesters from the Super Happy Fun America walked towards the police asking them to confront the peaceful counter demonstrators. This behavior on their part is not surprising in the least, as the group has been under increased scrutiny after two of its leaders were charged in connection with the insurrection at the Capitol on Jan. 6, 2021, according to The Boston Globe.

So many Americans, like the attendees of this protest and the insurrection, are under the impression that mask mandates, vaccines, or social distancing measures are a form of facism. This is absolutely untrue.

The idea that wearing a mask or getting vaccinated means you are participating and enabling the transition from a democratic government to an authoritarian regime is more than inaccurate. It’s understandable that some are suspicious of the government, so when they are asked to wear a mask or get a vaccine that has been developed and approved at unprecedented speed, you might think they are pushing an agenda and spreading lies. However, the immense occupation of ICU beds and the overflowing of hospitals throughout this pandemic is not a lie. Those directly affected by the virus aren’t lying either. The number of deaths doesn’t lie. Facts don’t lie. Especially not almost two years later.

To take these very real circumstances and actively oppose it because it is an idea backed by the government makes you sound like an insensitive idiot. If the government tells you to put on a seat belt you do, or If they tell you to renew your passport you do.Yet you cannot be bothered to wear a piece of cloth on your face in public spaces? That isn’t facism, it’s standard public health procedure.

Since the start of the pandemic, there have also been fallacies regarding the legitimacy of the vaccine, which spread seemingly just as quickly as the virus itself. These conspiracies have been peddled by many conservatives and far-right Facebook posts, and people smart enough to fall for conspiracies (because only geniuses know that 5G cellular towers caused COVID-19).

As a result, enough people have refused the vaccine to keep this pandemic alive and have been radicalized into believing that a vaccine serves any other purpose besides protecting your body against a deadly virus and slowing the severity of spread to those around you.

Masks and vaccines have been proven to save lives and yet, vaccine refusal has only added to the neverending death toll of this virus.COVID-19 has taken 757,000 lives in the United States, the most of any country, and 19,000 in Massachusetts alone at this time.

In a recent report released by the Texas Department of Public Health, it has been found that the state’s unvaccinated population is 45 times more likely to contract COVID-19 and 40 times more likely to die from the virus than their fully vaccinated counterparts. The report also states that in data collected from Jan. 15 to Oct. 1, 85 percent of coronavirus deaths occured in unvaccinated individuals.

According to CDC data collected from Apr. 7 to Jul. 17, the unvaccinated nationwide are 11 times more likely to die from the virus.

These protesters are either unwilling to take the time to understand this fact, or are using willful ignorance, as deaths continue to increase, in order to display their clear frustration with God knows what.

We have seen this time and time again. Groups of very lonely people who clearly have good enough jobs (or none at all) take time out of their day to protest what can only be the most exhausting argument on earth. Anti vaxxers are a menace. They are a danger to national health and they contribute to a long line of contingencies that has kept the U.S. from getting over this pandemic.

Not only do their arguments on staying unvaccinated make a lack of sense, but these people and organizations carry a variety of incredible theories and beliefs that deserve a gold medal for the mental gymnastics they have to perform to reach these laughable conclusions––if you don’t laugh, you cry.

From their wonderful off-broadway rendition of Pride to Straight Pride, and their calling to abandon paper money and ‘return to a gold standard,’ it seems that fascism is not the only thing Super Happy Fun America hasn’t brushed up on.

But no matter how hilarious their criminally poor photoshopping skills are with their protest flyers (yes, we’re talking about the “Rise Against Tyranny” one with the flames and pitchforks, calling “patriots” to join the “uprising”…. you’re not the villagers from Frankenstein, let’s calm down), they still pose a huge threat to public health due to their ignorance and idiocracy.

A vaccine mandate during a public health crisis of proportions such as this one is not facism. Attempting to squash political opposition and prevent shifting executive power like some of these people tried to accomplish on Jan. 6, however, is.

We all want the same thing; we want this to be over. We want to go back to a life where mask-wearing isn’t necessary. We want to be able to go out without worrying about contracting a deadly virus. We want to return to normal as much as is possible given the world we live in today.

Asking the American people to do such a simple task for the sake of the entire population isn’t a sign of the fall of our democracy or facism taking over the country you seem to love so much. It’s our democracy at work. The only thing you have to do is get a couple of shots and call it a day.