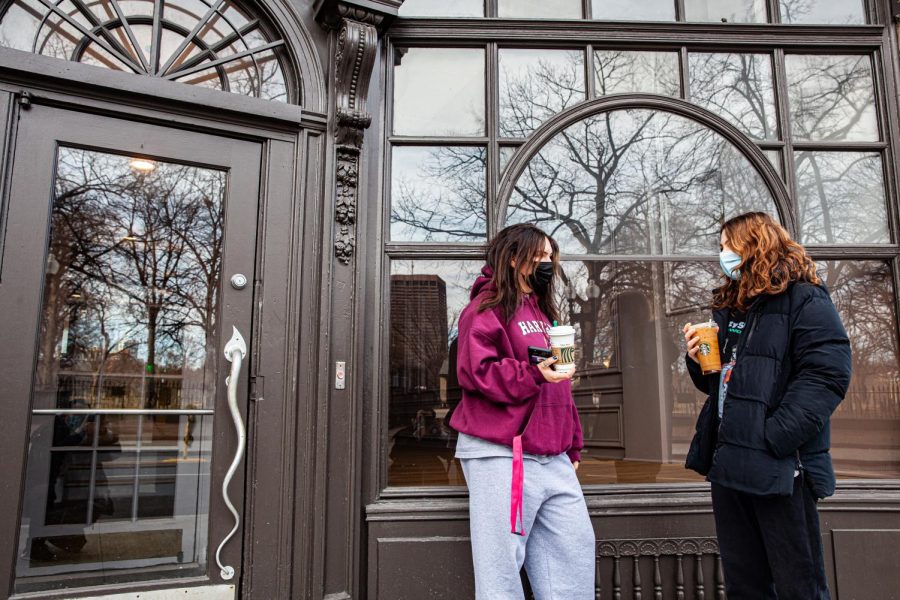 Students waiting in front of the Lion's Den.

By Charlie McKenna and Dana Gerber

Emerson administrators believe the surge in positive COVID-19 tests on campus—52 reported since March 31—may be the result of a variant of the virus spreading amongst the community.

In a Tuesday afternoon interview with The Beacon, Assistant Vice President for Campus Life and “COVID Lead” Erik Muurisepp said “certainly [it] seems like it is a very transmissible variant that is easy to be passed along to others.”

Muurisepp did not indicate which variant of the virus officials believe is circulating amongst Emerson and was quick to note that the college is still working with Tufts Medical Center on genetic sequencing that would confirm that it is indeed a variant causing the increased spread.

“This hasn’t been 100 percent confirmed because that would take a little bit more time and that’s in the works,” he said.

Muurisepp said the positives the college has reported over the past two weeks have resulted in more individuals developing symptoms than officials saw previously.

“We’re seeing a few more symptomatic people than we have in the past as well,” he said in a phone interview.

Positive COVID-19 tests have undergone an unprecedented spike at Emerson since March 31. Emerson has reported at least three positives each day since March 31, to the tune of 52 across nine days of testing. Muurisepp confirmed not all 52 positives are connected to one another, though in an announcement on April 1, he said some of the initial positives “seem to be linked and resulted in transmission within a group.”

The positivity rate has risen by .04 percent during that time frame—from .19 percent to .23 percent.

Muurisepp said “a significant majority” of the positives have come from students living on-campus.

The spread of the virus prompted college officials to shut down all activity on campus aside from in-person classes. Student organization meetings, athletics, and movement around campus for anything aside from essential activities were shut down for at least a week on April 7, and may be extended on Wednesday.

“The numbers are still concerning to me,” he said. “They haven’t dropped as much as I would like to have seen.”

In January, Muurisepp told The Beacon he believed the safety protocols in place at Emerson—like mandatory mask-wearing, twice-weekly testing, and social distancing—would be able to keep the variants at bay.

“Certainly it concerns me, and I think that is where it does go back to reinforce all of the protocols we have in place,” he said. “While it does seem to spread easier, maybe faster, we’ve been reassured that the measures in place also can help limit that.”

Muurisepp said when 81 students were in isolation or quarantine in the Paramount residence hall last week, the building was not at or past its capacity. Muurisepp said some isolated students who had tested positive stayed in rooms together.

“It was a concerning number …  that was a piece of the overall concern for our stay in room order and directing, but it was getting tight, but we hadn’t reached the tipping point, necessarily, of not being able to accommodate folks,” he said.

The college explored alternate housing instead of  Paramount—such as empty Resident Assistant suites or standalone singles with in-suite bathrooms—but Muurisepp said those spaces have not become necessary to use.