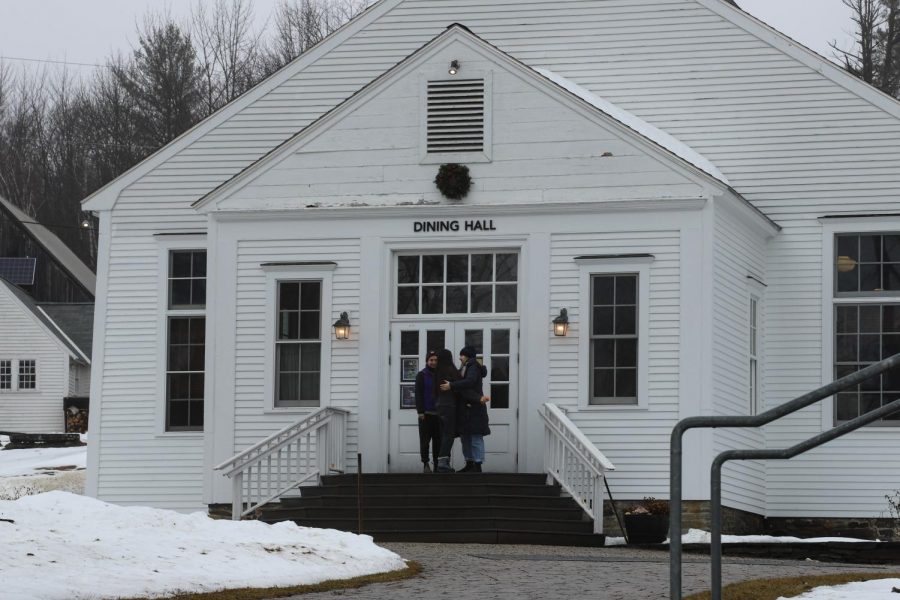 Students gather outside Marlboro College's dining hall after an emergency board of trustees meeting in early December 2019.

Despite mounting allegations of racism against the Democracy Builders founder, the sale of the Marlboro campus to the non-profit cannot be stopped by the Vermont Attorney General, according to the state office itself.

The Attorney General is set to release its review of both the campus sale and asset transfer agreement between Marlboro and Emerson on Monday, but Chief of Staff Charity Clark told The Beacon that “the parties’ right to contract (or not) is not affected by the AGO’s review.” Instead, the office will only assess whether the transfer is compliant with Marlboro’s mission and donor restrictions.

If the sale continues, Democracy Builders plans to create a “new kind of college experience” that is “affordable, flexible, and inclusive” on the Marlboro campus, according to the group’s website. The campus will function as the first extension of the group’s new “Degrees of Freedom” program. Students would receive an associates degree after four years in the program, which will start in the eleventh grade and be largely online.

The allegations of racism against Seth Andrew, the Democracy Builders founder, first surfaced in June. They stem from Andrew’s previous New York City-based charter school system he founded in 2006, Democracy Prep. Several Democracy Prep alums hoped these allegations would cause the Attorney General or the Marlboro Board of Trustees to cancel the sale, which was enacted with a contract in May.

“Andrew lacks the integrity that it requires to run programs like a college,” an anonymous member of the advocacy collective Black N Brown at Democracy Prep said in a June 9 Marlboro Town Meeting. “And his lack of integrity reflects poorly on Marlboro’s reputation, as well as the community as a whole, and should be a huge red flag.”

It is unclear if Marlboro has the power to cancel the sale now that the agreement has been signed.

Alums of Democracy Prep allege that Andrew cultivated a racist environment at the schools and that students of color and Black students were abused, dehumanized, and overworked.

“The systems themselves, like the demerit system, silent lunches, the solitary confinement like detentions, all that stuff was bad,” former Democracy Prep staff member J. Leshaé said in a phone interview with The Beacon. “What makes it worse is when you have white folk in performance of dominance—so yelling at kids, talking to the parents like they are not adults, treating teachers like they’re inhuman, that is what I was witnessing.”

Spurred by personal stories of neglect shared on social media, Black N Brown at DP has been gathering anonymous responses via Google form from current and former staff, administration, and students about their experiences with Andrew at Democracy Prep’s different schools. The form has received more than 350 responses since being posted in late June, according to an anonymous member of the collective at the Town Meeting. Audio of the meeting was obtained by The Beacon.

Andrew declined to comment beyond a Twitter direct message where he told The Beacon he does not “respond to anonymous and unfounded critiques.”

Andrew left Democracy Prep in 2014 to serve as senior advisor and superintendent-in-residence at the U.S. Department of Education, as well as a senior advisor in the Office of Educational Technology at the White House under President Barack Obama.

In the past month, members have pointed out specific criticisms of the school system and Andrew in the meeting, the Google form, and to The Beacon directly.

Several said Democracy Prep has a harsh system of penalization for minor infractions, like untucked shirts or improper footwear, that disproportionately target Black students and students of color.

Another anonymous member claiming to be an alumnus said in the meeting that both the system and Andrew himself left many students traumatized.

“Seth has caused such harm to so many students that have walked through Democracy Prep, and the sad part is a lot of students don’t fully process that trauma until they’re outside of Democracy Prep schools,” they said. “I was aware that the school was troublesome when I was in it… I said that the school wasn’t bringing up students—it was bringing up robots… I hope that Seth is never around an environment where he is leading Black and brown bodies ever again.”

Both Emerson and Marlboro signed an Asset Transfer Agreement on June 26, which would see all proceeds from the sale directed to Emerson.

Zenzile Keith, a former Democracy Prep staff member at the meeting, said the town of Marlboro should show solidarity with the Black Lives Matter movement by calling for the reversal sale of the campus to Democracy Builders.

“The way to show that Black lives matter, the way that you show that brown lives matter, right, is that you don’t allow someone like this to come into your community and spread the type of hate and disdain for Black and brown bodies like he’s done in Harlem,” she said.

“I would also urge fellow members of the campus working group and any entities involved directly or indirectly with the sale of the Marlboro college campus, and I would emphasize particularly those who recently issued public statements in solidarity with the Black Lives Matter movement, to make the same request of the trustees and the Attorney General,” he said.

The Marlboro Selectboard released a statement on Tuesday, calling on the Marlboro Board of Trustees and Vermont Attorney General to be transparent in its findings.

“The Selectboard also intends to host a professionally-mediated forum to address the collective anger, grief, and confusion related to the closure of the campus, and the allegations directed at Mr. Andrew,”  it reads. “We hope that all respective parties will participate.”

Vermont Rep. and Vice President of the Windham County National Association for the Advancement of Colored People chapter Nader Hashim said he was in the Marlboro Town Meeting Zoom call to gather more information before releasing a statement. A representative of the Windham NAACP chapter could not be reached for further comment on the statement.

Rachel Siegel, the executive director of the activism non-profit Peace and Justice Center in Burlington, VT, asked the town Selectboard—which runs Town Meeting—to delay the sale of the campus.

“We were very upset to hear about the allegations from Black and Brown at DP and hope that you all on the Selectboard will find a way to delay the sale until you’re able to get answers regarding the questions that they put forth,” she said. “The behavior of Seth Andrew and the legacy of trauma he’s left is not something we need in Vermont. It’s not something that should be anywhere.”

The Emerson student activist group Protesting Oppression With Education Reform encouraged students to sign a petition to stop the sale Friday through a post on the group’s Instagram page. The post said the Black N’ Brown at DP collective had been in contact with them about the allegations against Andrew. POWER organizes to ensure racial justice for POC and Black students.

“POWER stands in solidarity with Black N Brown at DP, a collective of African American, Afro-Latinx, and Latinx Democracy Prep alumni, families, and staff, who navigated and survived the traumatic racism of [Andrew’s] charter systems,” the post reads.

The post was republished by the Emerson College Student Union on its Instagram. At the time of publication, the petition has 572 signatures.

Leshaé said Andrew has a history of creating schooling systems, not places of education.

“I can say that education is not the practice of what is happening at Democracy Prep or anything that comes from Seth’s legacy,” she said. “Education is a process of discovery of self. It is the externalization of one’s inner authority. And what we experienced in the system like the Democracy Prep systems and the person who offers all of these different organizations is a schooling system, and that is different. Schooling is about telling you how to be, and what to be. Who to be, how to speak, and how to show up. It’s not about you. It’s about what they want to create in you.”

Updated 7/17/20: This article was updated to include information on posts from Emerson student activist groups denouncing the sale of the Marlboro campus after learning of the allegations against Andrew.