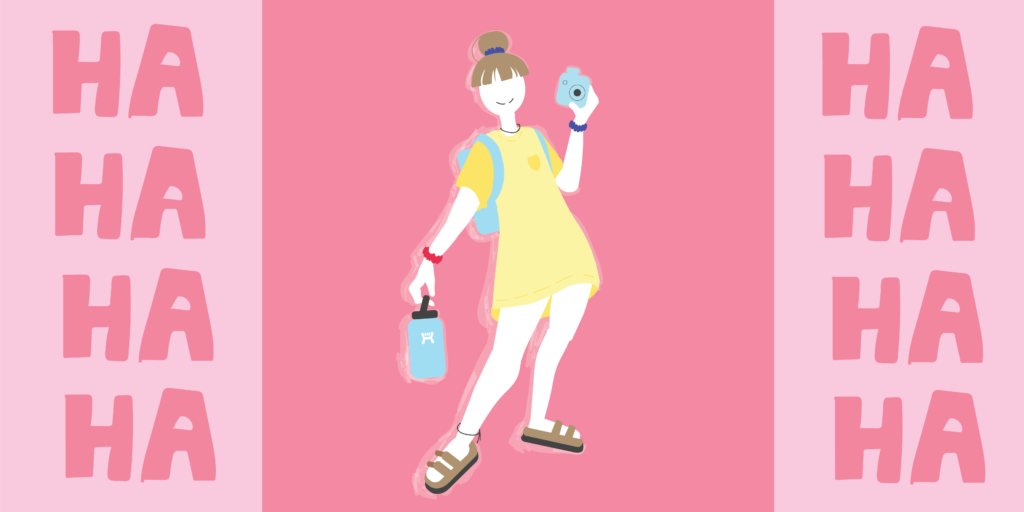 "Making fun of these girls is a lot easier than acknowledging what is really going on here: tearing down a group of teens for having fun." / Illustration by Ally Rzesa

With all of the hate and prejudice in the world, who knew teenage girls wearing oversized T-shirts and scrunchies would be the bane of our society’s existence? It seems that whatever teen girls do, they get mocked for it.

Over the past year, the latest teenage subculture, VSCO girls, rose to prominence. Named after the photo-editing app popular with teenagers on social media, VSCO girls are known as the “Tumblr girls of 2019.” They often have a distinct aesthetic and heavy social media presence. They stereotypically wear graphic T-shirts, Birkenstock sandals, scrunchies, and shell jewelry. Most VSCO girls carry around clunky Hydroflask water bottles.

Backlash quickly followed rise of VSCO girls. Many internet users mock them by making short comedy videos called TikToks about them or dressing up as them for Halloween.

People have even called me a VSCO girl in a condescending manner. But I wear scrunchies because they’re cute and don’t pull on my hair. I have a Hydroflask because I like my water cold. I use reusable straws because they don’t cause harm to the environment. I should not have to justify owning these things out of fear of being lumped into the VSCO girl stereotype. People should not feel ashamed for talking about reusable straws or wearing friendship bracelets. Far bigger problems exist in the world—such as climate change and gun violence—than teenage girls being teenage girls.

Making fun of these girls is a lot easier than acknowledging what is really going on here: tearing down a group of teens for having fun. It’s time we admit that teasing these girls is problematic, even if it may not appear that way upon first glance. Shaming girls who are wearing and doing what they like, no matter how ‘basic’ it may seem, is not productive. Honestly, the people who ridicule VSCO girls are far more annoying than the girls themselves.

VSCO girls are not the first teenage girl stereotype to be torn down, just the most recent. Teens have been mocked for being “Tumblr girls,” “fangirls,” taking selfies, and liking “boy bands.” Why should boy bands like One Direction be classified any differently than a normal band? The fact that their target audience is teenage girls does not invalidate them as a mainstream musical group. And since when is a teenage girl being confident—which is hard to come by these days—and taking pictures of herself a bad thing?

As Jonti Ridley wrote for Fashion Journal, “slapping the term ‘girl’ at the ends of these labels is to [infantilize] women.” It’s not just a VSCO user, but a VSCO girl, as if that is a worse thing.

In reality, people have been making fun of teenage girls’ interests for years, while boys have not received anywhere near the same amount of criticism. So although making fun of VSCO girls may seem like light-hearted teasing, jokes about their behavior are rooted misogynistic undertones. The trend of mocking VSCO girls is just the latest example of a culture that vilifies and belittles young women for their harmless interests.

Think of all of the teenage boys you know who are fans of superhero franchises, Game of Thrones, and video games. These are far from niche interests, but rarely do people make fun of teenage boys for participating in mainstream culture. Sure, it might be tiring to see dozens of girls wearing similar things and acting in similar ways, but when did teen girls simply living become a legitimate problem?

Plus, when girls like superheroes or sports, which are generally seen as more masculine interests, boys question their authenticity as a fan. They ask things like, “If you’re a real fan, have you seen all the movies?” or “Name all the players on this team.” Regardless of whether girls decide to do something popular or diverge into new interests, they are met with similar criticism. This constant berating can strip away their identity and invalidate their interests, which can negatively impact their self esteem.

Acknowledging the fact that VSCO girls are often privileged white girls is one thing. But oftentimes, it does not appear like people are criticizing them for their privilege, but rather for their identity as a teenage girl. From personal experience, being a teenage girl is hard enough without having to worry about people diminishing your interests.

At its core, VSCO girl culture is about being laid-back and accepting the less glamorous sides of life. Its followers often wear minimal makeup, beachy jewelry, casual clothes, and messy buns. They are inadvertently promoting the idea that girls don’t have to be perfectly done up with a full face of makeup, fancy clothes, and styled hair to feel confident, but they can embrace their natural beauty.

This attitude is needed at a time when the teenage years are a source of insecurity for many. In fact, 75 percent of teenage girls with low self-esteem reportedly engaged in destructive activities like self-harm, smoking, or unhealthy eating habits. If teens can find something that makes them happy, no one else should care as long as it’s not harming anyone.

Whatever teenage fad pops up next is sure to receive the same criticism as VSCO girls for the same, unfair reason: teenage girls are doing what they like. Instead of taunting the next girl you see wearing a scrunchie on her wrist, think about this: is it really productive to hold girls’ interests against them?