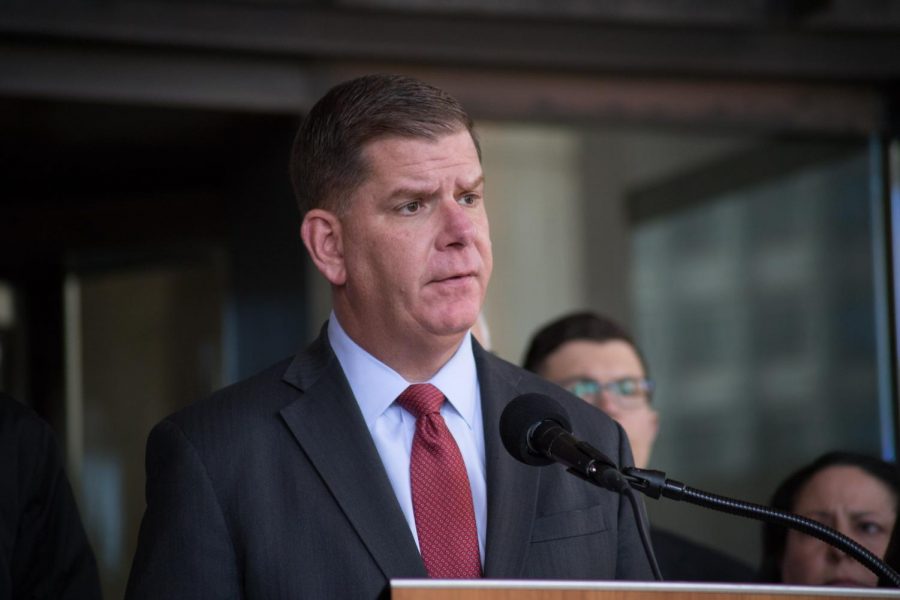 On paper at least, the coronavirus situation in Boston looks to be improving to the point that leaders could soon start planning to bring students back into classrooms, Mayor Martin Walsh said Wednesday as he urged caution on Thanksgiving to keep the tenuous positive trend going.

“The last seven days, we’ve seen a decrease. We’re going in the right direction, at least for the first time in five weeks. If we continue in that trend then there’s no conversation about shutting things down, there’s no conversation about shutting restaurants down, we actually can have conversations, probably pretty soon, about bringing people back into schools, things like that,” the mayor said during a press conference outside City Hall. “We just need to continue to see that trend.”

There was an average of 215 positive COVID-19 tests for Boston residents each day during the week that ended Nov. 20, down from a daily average of 245 the previous week, Walsh said. The positive test rate was 4 percent, down from 5.6 percent and every Boston neighborhood saw a decrease in its community positive test rate except for a “really small uptick” in Mattapan, he said.

“Our tests were up and new cases were down for the first time in several weeks — actually the first time in about five weeks — so it’s good signs, encouraging signs, as we think about where we are,” Walsh said. “And I want to thank everyone. We just need to keep it going. We need to continue to take the precautions that we need to do, especially tomorrow with Thanksgiving.”

Walsh attributed the improvement to a few things: more people are wearing masks regularly and are gaining a better understanding of the importance of avoiding social gatherings, he said. Some of it could be due to Gov. Charlie Baker’s recent stay-at-home advisory and decision to cease restaurant and entertainment activity by 10 p.m., Walsh said.

The mayor also said that City Hall has been getting fewer complaints about large gatherings in private residences since Baker put more teeth on the 10-person indoor gathering limit.

“It’s pure, pure data as part of it,” Boston Chief of Health and Human Services Marty Martinez said. “We see a big increase in testing, which is important, and we see less people testing positive. So the metrics are moving in the right way and the hospital metrics, as the mayor mentioned, are also not showing that capacity has been stretched yet. But I always am the voice of caution … one week of data does not make a trend.”

Walsh and Martinez repeated calls that they and other public officials have made in recent weeks for people to keep Thanksgiving gatherings to their immediate households or as small as possible, and take other precautions to reduce the risk of COVID-19 transmission.

The mayor said he typically sees lots of family members on Thanksgiving but will see only his mother this year, in addition to his partner.

Despite the positive trend he highlighted Wednesday and Boston being free of the state’s highest-risk designation for three weeks, Walsh said his city will not advance to the second step of Phase 3 of the state’s reopening plan.

While he was taking questions from reporters, the mayor said that he has heard a lot of rumors that he’s considering shutting down restaurants in Boston, and said he wanted to put those to rest.

“We have no, no, no intention on shutting down restaurants in the city of Boston as of right now. Now, a week from now if we’re in a different place, if a hospital system is stressed, if the numbers continue to go up, we might have a different conversation,” he said. “But as of right now, there’s no, we have no plan to shut restaurants down. As a matter of fact, seeing that the last bit of average here is encouraging that we’re seeing the numbers go in the right direction.”