Walsh poised to jump to Biden team as Labor Secretary 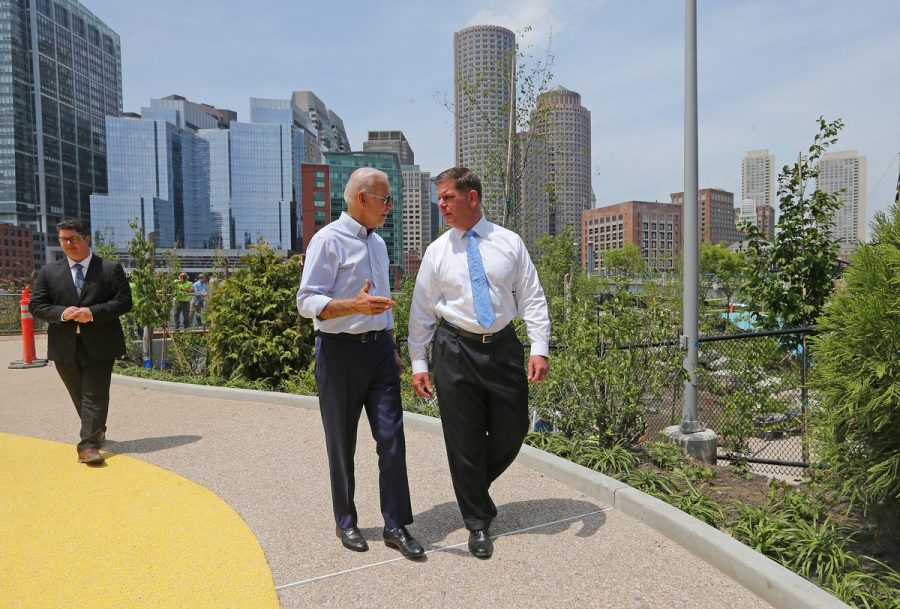 Joe Biden walks with Boston Mayor Marty Walsh during a visit to the city n 2019.

President-elect Joe Biden formally nominated Boston Mayor Marty Walsh to serve as labor secretary Thursday night, solidifying Massachusetts’ influence on the incoming administration and opening up what could be a free-for-all for City Hall.

“Working people, labor unions, and those fighting every day for their shot at the middle class are the backbone of our economy and of this country,” Walsh tweeted Thursday night. “As Secretary of Labor, I’ll work just as hard for you as you do for your families and livelihoods. You have my word.”

Walsh, a House lawmaker for 17 years before becoming mayor in 2014, also served as secretary/treasurer of the Boston Building Trades and had been discussed as a leading contender for the labor job in Biden’s administration.

“As a longtime union member, Walsh knows that collective bargaining is essential to building back better by combating inequality, beating COVID-19 and expanding opportunities for immigrants, women and people of color. He will have the ear of the White House, the Cabinet and Congress as we work to increase union density and create a stronger, fairer America,” AFL-CIO President Richard Trumka, who was reported to be among Walsh’s loudest boosters as Biden weighed candidates for the job, said. “From the Boston Building and Construction Trades Council to the Massachusetts State House to the mayor’s office to his own personal journey with overcoming addiction, Marty Walsh has always been a fighter who understands the power of working people standing together for a better life.”

Though Walsh’s long-standing ties to organized labor were celebrated when word came that he would be nominated as labor secretary, they also led to some issues for Walsh at City Hall. Two City Hall aides to Walsh were convicted of pressuring a music festival promoter into hiring union workers who supported the mayor for a concert at City Hall Plaza in 2015, though the convictions were overturned by a U.S. District Court judge and federal prosecutors chose not to appeal earlier this year.

Biden’s office did not formally announce the pick until about 7:30 p.m., but the president-elect made a joke Thursday afternoon while introducing picks for his Department of Justice that he was still looking for an Irishman to add to the mix, according to a pool report.

The Dorchester Democrat has for years had a close relationship with Biden, ever since the two Irish-Catholic Democrats hit it off at a Beacon Hill event that Kevin Fitzgerald, then the House sergeant at arms, organized in 2007 while Biden was running for president, according to a Boston-based campaign hand who worked on Biden’s team.

When Walsh first won the mayoralty in 2013, then-Vice President Biden from the White House called the wrong Marty Walsh to offer congratulations, instead connecting with a former Sen. Edward Kennedy aide and consultant by the same name. On New Year’s Day 2018, Biden presided over Walsh’s second inauguration at the Cutler Majestic Theater.

“Mayor Walsh is a close friend and an incredible public servant,” Biden said in a statement at the time.

More recently, Walsh introduced Biden in April 2019 when he spoke from the back of a Teamsters Local 25 flatbed in the South Bay Center parking lot in Dorchester to support striking Stop & Shop workers. Biden would soon make his 2020 presidential campaign official.

Walsh will likely feel at home in Biden’s administration if he is confirmed by the U.S. Senate. Former U.S. Sen. John Kerry will serve as Biden’s presidential envoy on climate, Deputy Chief of Staff Jen O’Malley Dillon grew up in Franklin and graduated from Tufts University, and Gina McCarthy, who served in state environmental affairs posts here before rising to EPA administrator under President Obama, will be Biden’s national climate adviser. That’s not to mention deputy attorney general nominee Lisa Monaco, a native of Newton, or the handfuls of other incoming administration officials who were educated in Massachusetts.

If Walsh resigns to become labor secretary, which could come after confirmation by the U.S. Senate, Boston City Council President Kim Janey of Roxbury would be elevated to acting mayor, making her the first woman and first Black person to lead the city.

Janey, who is serving her second term on the council, grew up in Roxbury with parents who were both 18 when she was born and, after sixth grade, attended Reading Public Schools through the METCO program. She was one of two Black students in her graduating class, she says in her campaign website biography. At the age of 16, as a junior in high school, Janey gave birth to a daughter. Janey’s campaign said the “experience of being a young mom having to fight for her daughter, and her family’s history of activism, made Kim a natural advocate for children and equity in education.”

Before being elected to the City Council from a 13-person field in 2017, Janey worked as senior project director at Massachusetts Advocates for Children, served on the executive committee of the Boston branch of the NAACP, and was a founding board member of MassVOTE.

Janey congratulated Walsh on Thursday and said his legacy will reflect his dedication to working people and good jobs.

“Should Mayor Walsh be confirmed by the Senate, I am ready to take the reins and lead our city through these difficult times,” Janey said. “I look forward to working with the Walsh administration and my colleagues on the Council to ensure a smooth transition, as we address the unprecedented challenges facing our city.”

If Janey is elevated to serve as mayor on an acting or interim basis, she would also have an incumbency advantage if she opts to enter the 2021 mayoral election, shaking up a field that so far includes city councilors Michelle Wu and Andrea Campbell. A source close to City Councilor Annissa Essaibi George said she is seriously considering running, and House Ways and Means Committee Chair Rep. Aaron Michlewitz is also thinking about joining the field.

The Dorchester Reporter said Thursday that the city charter calls for a special election if the mayor resigns before March.

“Congratulations to Mayor Marty Walsh on his nomination as Labor Secretary for the Biden Administration. He will be the first union member to serve in this role in nearly 50 years, and his leadership will come at a critical time for the labor movement,” Wu said. “There is much work to do to clean up the backwards, anti-worker policies of the Trump administration that have hurt so many here in our city, and Boston needs a partner to fight for working families at the federal level.”

In September, Walsh got a bit ahead of Wu’s official mayoral campaign announcement when he told the Boston Globe that Wu had called him to say she would be running in 2021.

“Congratulations to Mayor Walsh on his nomination as Secretary of Labor – a fitting role for someone who has spent his entire career fighting for working people in and out of public service,” Campbell said. “For Boston, thereâ€™s so much at stake in 2021 as we look to recover from this pandemic and reimagine what our city can be without persistent inequities. I know Mayor Walsh will be a partner in that work in this new role.”

When President Bill Clinton reached into Boston City Hall to appoint Mayor Ray Flynn ambassador to the Vatican in 1993, City Council President Thomas Menino became acting mayor, a post he would use as a springboard to the next two decades that would make him the city’s longest-serving mayor.

Biden at 1:30 p.m. Friday plans to introduce Walsh, Raimondo and other members of this economic and jobs team at an event in Wilmington, Delaware.