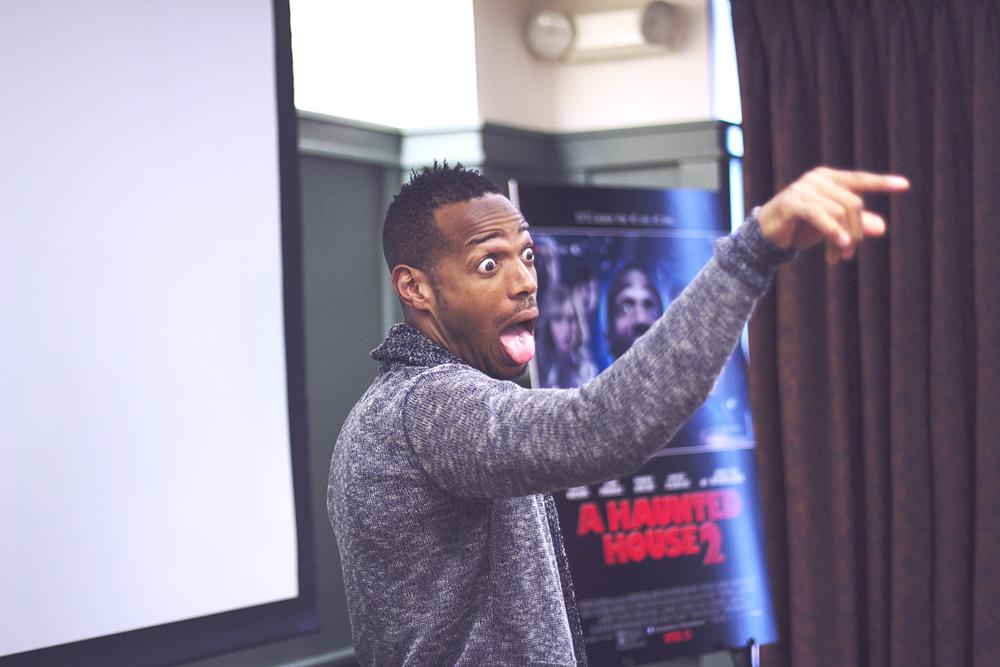 Marlon Wayans does not believe in idle time. When a two-hour window appeared in his two-month promotional tour for A Haunted House 2—during which, according to Wayans, he will average three hours of sleep a night—he filled it with a trip to Emerson College.

Speaking in the Beard Room Sunday, March 23, Wayans’s Q-and-A had a theatrical feel. He is a classically trained actor, with broad Shakespearean gestures. He abandoned the microphone with a grin.

He slips between the roles of his life quickly and easily. He is an actor, producer, comedian, creator, and a father of two.

Wayans has been active in Hollywood for more than 20 years, and is best known for his comedy roles in films like Scary Movie and White Chicks, both of which he co-wrote. He’s also known for a dramatic part in Darren Aronofsky’s Requiem for a Dream, in which he played addict and drug dealer Tyrone C. Love.

During his event at Emerson, Wayans played the part of a teacher, doling out advice to eager students, but was self-conscious about the role.

“I dress like a professor,” said Wayans, tugging at his expensive-looking sweater, “but I talk like a goddamn freshman.”

He got more comfortable as time passed, switching between seriously discussing his thoughts on media representation— “the Hispanic population is a billion-, maybe trillion-dollar industry. Why is no one catering to them?”—and cracking jokes— “My comedy has a distinct jalapeño onion flavor. You know, like that shit you eat when you’re high as hell and you go, ‘damn, that’s good!’”

Soon Wayans was as familiar with his audience as he was with the cast of comedy superstars he’s worked with. He spoke fondly of Jim Carrey, and casually referred to Kevin Hart as “Kev.”

He gave advice as it was necessary. Some of it was specific—the commandments of comedy, so to speak.

“You parody a genre, not a movie,” Wayans said. He added later, “The best jokes are colorless. The point of a joke is to make everybody laugh.”

His passion for comedy was shared by his audience, a group of about 30 students who took turns doing stand up while waiting for him to arrive. Najah Muhammad, a senior performing arts major, asked the audience why they were there.

“First rule: find something you love,” he said. “Second rule: Work at it every single day.”

Wayans recalled his start in the business, his merciless schedule.

“Not joking, I was shooting my first gig on the day of my graduation,” he said. “I went straight from there to the set of a Kmart commercial.”

Not long after graduating from Howard University, Wayans moved to Hollywood with brother and fellow actor Shawn Wayans for a regular job on the award-winning TV sketch series In Living Color, started by his other two brothers Damon and Keenen Wayans.

The constant grind is something familiar to many Emerson students, as is Wayans’ advice to diversify.

“It’s not enough to just be one thing anymore,” he said. “I couldn’t just be a comedy actor. I had to start writing, producing, promoting myself. I had to become a creator.”

Muhammad, who is graduating in May, called Wayans’s session at Emerson a “call to action.”

“We live in a culture that demands instant gratification, but it’s not like that out there,” she said. “All of my biggest inspirations had to work hard to get where they are.”

The Q-and-A at Emerson preceded an advanced screening of A Haunted House 2 at the Regal Fenway theater. Wayans co-wrote the film, debuting nationwide April 18, with producer Rick Alvarez, and stars as Malcolm, a young man plagued by paranormal events.

Wayans attended the screening and did a second Q-and-A afterward. He believes attending screenings is one of the most important things he does.

“It helps me to connect with the audience,” he said. “I love hearing them laugh. That’s what I do, you know?”