‘What Do We Have In Common?’ Art Installation seeks to provoke thought 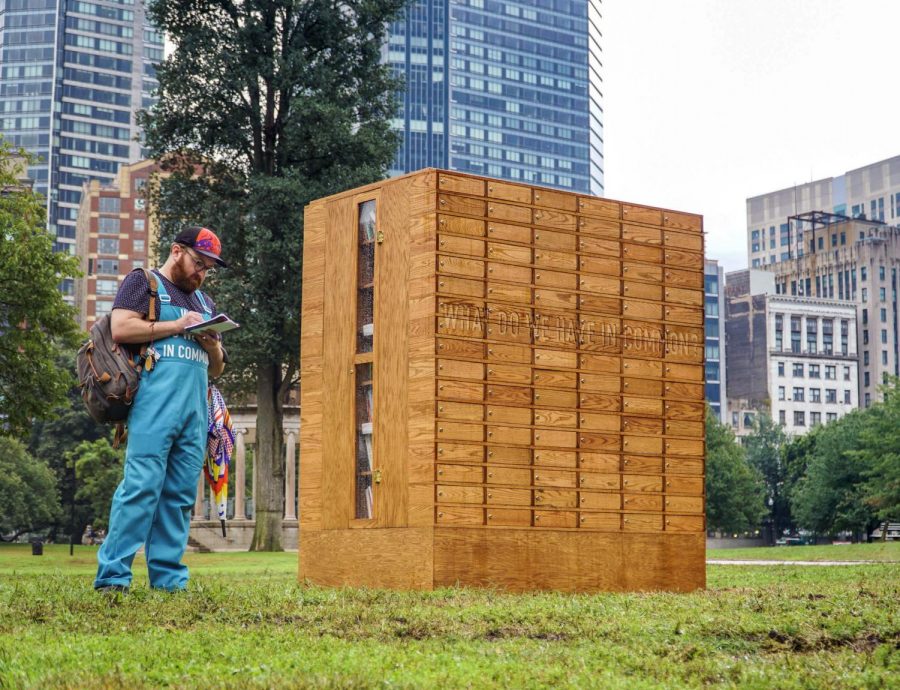 "What do we have in Common" installation in the Boston Common.

Friends of the Public Garden teamed up with NOW + THERE to celebrate their 50th anniversary with a public art piece titled “What Do We Have In Common?” on Boston Common until Oct. 26 with a purpose to provoke discussion and thought regarding the nature of ownership.

“What Do We Have In Common,” created by artist Janet Zweig, is an immersive, experiential piece of art that engages people as they walk through Boston Common and see a large, wooden box placed in the middle of the grass. The large, wooden box resembles a cabinet with 200 drawers filled with boxes of questions and glass windows that include resourceful books inside. The books contain the history of Massachusetts’ land. Around 10 miniature boxes are scattered around Boston Common every morning so random park visitors encounter questions that challenge space, ownership, and property.

VMA Professor, Cher Knight, an art historian and public art enthusiast, is a member of Now + There. She sees the questions as a way to provoke dialogue about the vulnerability of public space.

“It’s a way to think about what we all owe each other as fellow human beings, and a way to do some deep listening,” Knight said.

Slandie Prinston and Tra Ha are a few of the guides stationed at the art piece. Their jobs add a human touch to the art piece as they introduce Zweig and her art. Furthermore, they connect with the audience to find commonalities, just as the piece intends to do. The guides randomly choose questions from the boxes scattered around the Common to ask visitors.

“The purpose of those questions is to get people to tap into their curiosity, practice a little bit of self introspection, and question the world around them a little more,” Prinston said.

The art piece comes off as quite political because of the discussions that it provokes, especially in terms of the current relationships the United States has with other countries, Prinston said. As an immigrant from Haiti, Prinston said she resonated with the piece because of the imperialism her country has faced.

“I engage in a lot of conversations [regarding] social justice, like who owns my body, who owns my rights, [especially] as an immigrant,” Prinston said. “The questions of rights, democracy, body, body autonomy, land ownership, are super relevant.”

The questions allow people to truly take a minute and analyze the space around them since most don’t have one, straightforward answer.

“​I asked two girls a question: who owns your body?” Ha said. “They want to think that they own their body, but at the same time they know that they don’t, because there are so many different rules and laws of the way a woman should be and do with her own body.”

The questions placed around the Common and in the drawers of the exhibit make one take a step back and stagger a bit because of their complexity.

“Every time you ask a person a simple question, like who owns the air, who owns the park, they all will actually take a minute and really think about it,” Ha said.

Everyday, parts of the art piece are removed and scattered which, to Prinston, represents the phenomenon of life, death, and the afterlife.

“I feel like it replicates the cycle of life and destruction, or rebirth and the process of regeneration,” Prinston said. “It’s an abstract version of what’s happening here all around us as far as nature goes and people flowing through the commons. The piece really embodies a lot of the reality that’s happening around us and the movement.”

Prinston and Ha are both writers, and use public art as a way to fuel their creative writing process.

“It is a personal exploration for me, and I’m curious to see how my interactions and conversations here affect what I write,” Prinston said. “It’s been interesting to hear different perspectives and see where people are coming from, like why do they think the way they do and, again, from an activist point of view that’s super interesting and relevant.”

The art piece was vandalized this weekend—the glass was smashed, which is an unfortunate reality for public art.

“Public art comes with the vulnerability of public space,” Knight said. “It’s difficult when working in the public sphere.”

Public art is often ignored as people walk by with no acknowledgement towards it. As a creative, Knight values public art for what it is—a way to provoke thought. She took her Introduction to Visual Arts sections to visit, “What Do We Have In Common” to do just that.

“Some may like it and some won’t,” Knight said. “But it’s a way to have a conversation we weren’t having before.”

It’s important for these discussions about the nature of ownership to continue past Oct. 26, when the piece is taken down, she said.