What does it take to get a snow day? 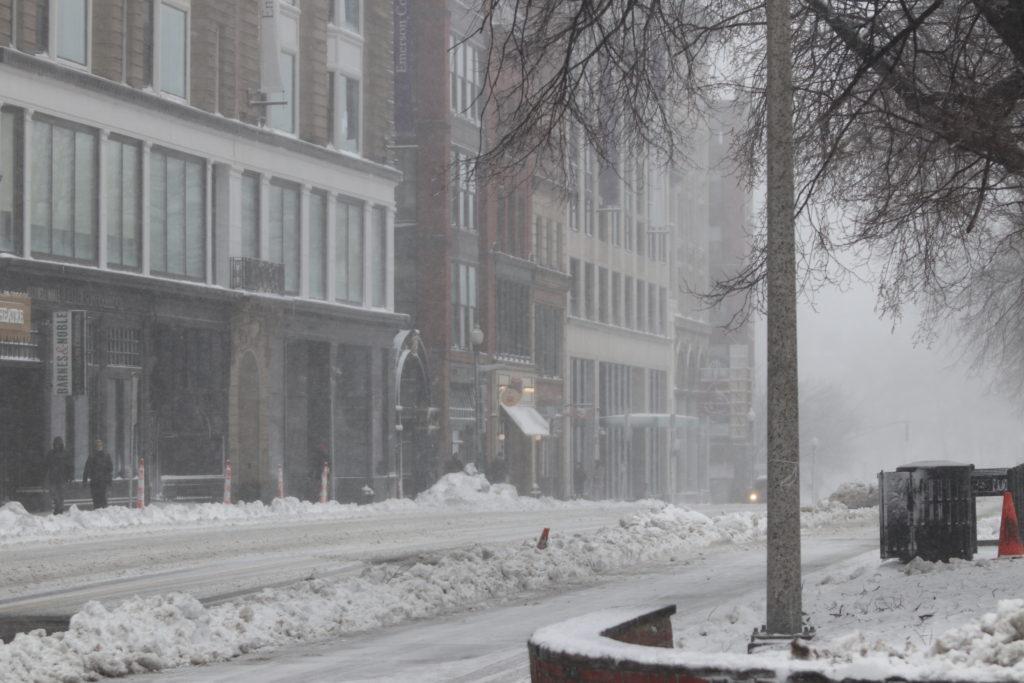 Emerson's campus was blanketed in snow.

A nor’easter predicted to drop upwards of a foot of snow loomed over Boston Tuesday, March 13. Emerson students and faculty members waited by their phones, wondering if they’d have to travel to campus the next day, with commutes that ranged from a two-minute walk to an hour-long drive. The message that Wednesday classes were canceled didn’t come until about 10 p.m.. Compared to Emerson’s previous weather alerts, this was early.

Emerson’s approach to alerting students comes from two important factors that college officials discuss during weather emergencies—the severity of the storm and how the storm will hit the college’s academic calendar—Senior Associate Vice President of Real Estate Arthur Mombourquette said.

Who makes the decision?

When weather emergencies are underway, Mombourquette and Director of Emergency Management Chris Beaurpere bring together representatives from the Office of the President, Academic Affairs, Student Life, and the Emerson College Police Department in a conference call to discuss whether or not the college will cancel, delay, or keep classes open the next day.

Why does it seem like Emerson takes longer to make the call?

Mombourquette said the college waits for all of the information about the storm to come in before making a final decision. Last year, the college canceled classes for what turned out to be a rainstorm. Mombourquette said Emerson was one of the first schools in the Boston area to send out the alert.

“We lost an entire day of classes that needed to be made up because we made the wrong decision,” he said. “It’s always a little bit of a roll of the dice depending on what the weather does.”

He said the decision is primarily based on first and foremost the safety of faculty, students, and staff.

“We try to balance that with the academic needs of the student population, and keeping in mind that we’re required to have a certain number of teaching days each semester and that we’re on a pretty tight time frame,” Mombourquette said.

Why is Emerson’s academic calendar a factor?

Registrar William DeWolf said there is no flexibility in the schedule of classes at Emerson since courses meet the minimal amount of classroom time for federal financial aid guidelines. Therefore, cancellations for weather or other issues must be rescheduled.

Emerson’s calendar year began on Sept. 6 and ends May 2 this year. While other schools in the Boston area begin at a similar time in September, colleges like the Massachusetts College of Art and Design and Boston University end later in May.

Why aren’t there more instructional days?

Provost and Vice President for Academic Affairs Michaele Whelan wrote in an email statement that additional makeup days or study days must be negotiated with the faculty union.

“I certainly have heard a lot [from faculty] that it’s incredibly disruptive to the learning process to have this number of interruptions and challenges that happen,” Full-Time Faculty Union President Robert Colby said. “I don’t know that it would all be solved by having a longer school year, with study days and extra days at the end, but some believe it would take out some of the stress.”

But the decision isn’t unanimous, and a faculty assembly proposal for extending the school year has never been reached. Colby said there are a number of faculty members who feel there is no need to add more days to the calendar. They juggle outside research projects and other commitments that fall outside of the school year.

Is the current calendar system working?

Colby said the pressure seems greater this semester for faculty and students to have class projects and assignments completed by the end of the year, without any study days or a reading period in between. He said adding snow days to make up for on top of that exacerbates the issue even more.

“I think there are solutions to this. I just think it’s a lot of moving parts, which is why people have tried to make the current system work as well as it can. But I think it’s just about broken our backs this spring,” he said. “The real goal here is to make the educational experience as good as it can be for students.”