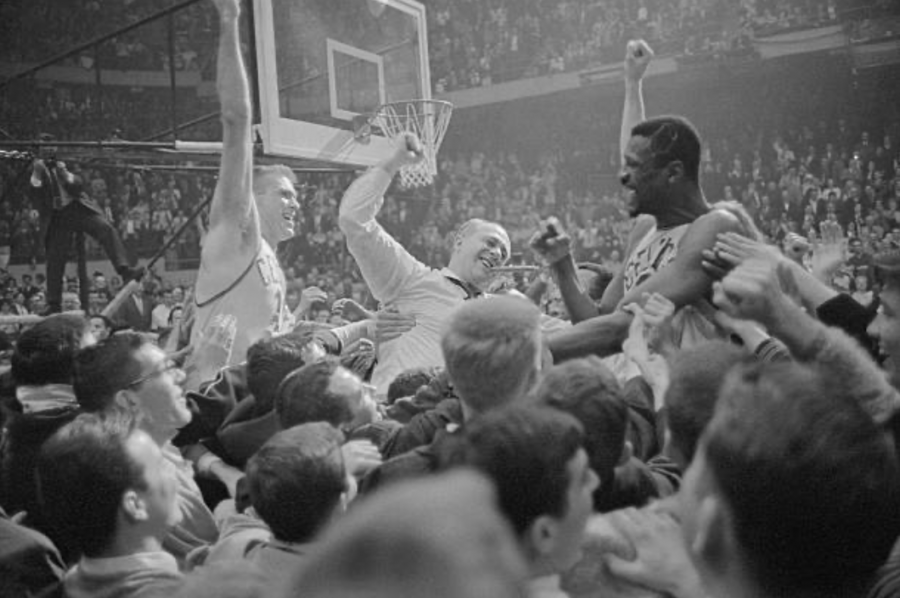 When I heard Tommy Heinsohn passed away on Monday, Nov. 9, a random memory came to mind. Almost ten years ago during a Boston Celtics regular-season game, Greg Stiemsma, a former Celtics big man who was on the team almost as long as someone going in and out of Dunkin’ with their dark roast, blocked a shot against the opposing team. Heinsohn, who was color commentating the game alongside his longtime broadcast partner Mike Gorman, likened Stiemsma’s blocking ability to Bill Russell’s. How wild of a comparison is that? A guy like Stiemsma compared to an 11-time NBA champion and Hall of Fame Celtic Bill Russell. Of course, only Tommy would say that.

Tommy Heinsohn is a legend among Celtics fans in many different ways. He played all nine seasons of his NBA career with the Celtics from 1956 to 1965, winning eight championships and averaging 18.6 points, 8.8 rebounds, and 2 assists per game. He also played alongside Celtics greats and Hall of Famers like Russell, Bob Cousy, and Sam Jones. Heinsohn’s number 15 was retired by the Celtics in 1966, and he was inducted into the Basketball Hall of Fame as a player in 1986.

It didn’t take Heinsohn long to rejoin Boston as head coach in 1969. Coaching the Celtics for nine seasons, Heinsohn had a career .619 winning percentage. Tommy also coached Boston to two more titles in 1974 and 1976 with teams consisting of Hall of Fame Celtics like John Havlicek, who Heinsohn played with, Jo Jo White, and Dave Cowens. His coaching career resulted in his second induction to the Basketball Hall of Fame in 2015. Imagine having an NBA championship ring for each finger and being in the Hall of Fame twice? That’s one heck of a resume to be happy about, folks.

Personally, Tommy’s impact on my Celtics fandom came from behind the broadcasting table alongside Mike Gorman. Whether it was roaring “THE LITTLE GUY” anytime 5’9” guard Isaiah Thomas made a huge shot, yelling at the refs any chance he could, applauding Celtics like Kevin Garnett or Marcus Smart for another good hustle play, or giving out “Tommy Points” to the scrappy players on the floor, Tommy made watching Celtics games so much fun. Heinsohn was like that grandfather who had words of wisdom from time to time, said whatever he pleased, and never passed on a good chuckle.

Sure, Heinsohn was biased towards the Celtics, but he simply lived and breathed Celtics basketball. Cousy accurately summed up Tommy’s legacy to NBC Sports Boston’s Chris Forsberg following Heinsohn’s passing.

“I think Tommy symbolizes, more than any other Celtic that has come through this thing since 1950, the Celtics dynasty,” Cousy said.

No truer words have been spoken.

It’s also important to note what Gorman said about Tommy in a tweet last week.

“Roughly 2800 times I sat down with Tommy to broadcast a game. Every time it was special. HOF player…HOF coach…HOF partner. Celtics Nation has lost its finest voice. Rest In Peace my friend. It has been the privilege of my professional life to be the Mike in Mike & Tommy,” Gorman said.

It won’t be the same without hearing Tommy’s voice on the call during a Celtics game. But somehow, someway, Celtics fans will still call out a stupid foul call by a ref or burst with happiness after a great Celtics play, just like Tommy would always do.

Rest in peace, Tommy Heinsohn. You are, and will always be, Mr. Celtic.