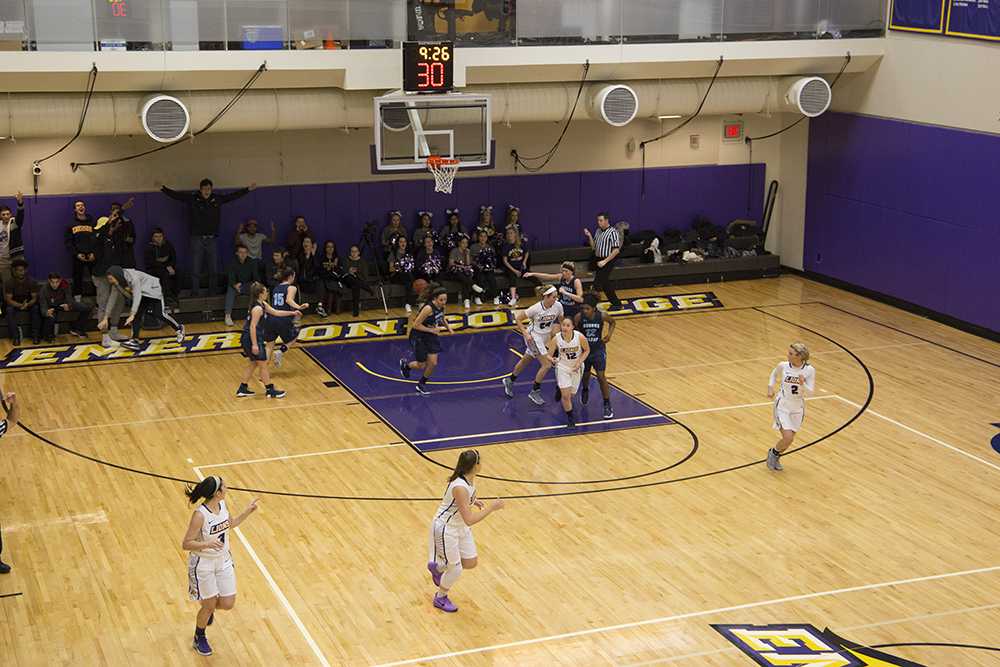 With 11 games left to play, the Emerson women’s basketball team (5-10) occupies the final NEWMAC playoff spot with a conference record of 3-5.

After a six game losing streak from Nov. 29 to Dec. 12, the Lions won three straight games against NEWMAC opponents. This included a 66-51 win on the road against Wellesley College, an 83-76 home win against Smith College, and an emphatic 89-35 away win over Mount Holyoke College. Head coach Bill Gould said he’s proud of the way his team turned its fortunes around to start the new year.

“We spent the first semester dealing with significant injuries,” Gould said. “I thought we were playing really hard and well but we were still 2-8. We come back and now [Natalie Busch and Charlie Boyle] are ready to go and healthy and then we win our first three games to start off second semester.”

Since winter break began, Boyle’s older sister Charlie Boyle has returned to the starting lineup after suffering a back injury prior to the season. After featuring off the bench in the first three games of the year, the elder Boyle missed the Lions’ next seven games. She returned to start their last four and averaged 6.7 points per game and four rebounds per game in her seven appearances this year.

Although Boyle may not be producing the same scoring numbers she did in the past season, Gould believes her presence is valuable to the team.

“She brings a different presence on the court,” Gould said. “We were shooting better when Charlie was on the court. [When] you bring that [kind of] kid into a game, other teams have to deal with that and it helps relieve a little pressure for everybody else.”

One key victory for Emerson came against Smith College (11-4, 5-2), when the Lions topped the Pioneers 83-76. Foultz and junior guard Natalie Busch led the victorious Lions with 19 points each. Senior guard Maya Savino, who is fourth in the NEWMAC in three-point shooting percentage, scored 13 points and led the Lions with two steals and eight assists.

Coach Gould spoke highly of the offensive performance his team put together against Smith.

“That was our best shooting game overall,” Gould said. “It was an exciting offensive game to be sure and I thought it was a good game. Offensively we were clicking on all cylinders.”

The Lions are in seventh place in the conference, one game behind Coast Guard and one game ahead of Clark, Wheaton, and Wellesley, who are all tied for eighth. Emerson has nine conference games remaining in its quest to qualify for the NEWMAC playoffs for the first time since the 2014-15 season.

Key matchups for playoff qualification come against Wheaton on Jan. 24 and Feb. 14, and Clark on Jan. 31. Coach Gould said he’s optimistic about the team’s chances to push for the playoffs this season.

“In reality we need to beat [Wheaton, Clark, and Coast Guard],” Gould said. “I 100 percent believe that this year we are as good as any other team in the league. If we play well for the rest of the season we’re going to be the hunt to win the NEWMAC, there’s no doubt in my mind.”

The women’s basketball team will be in action at home against Coast Guard (7-7, 4-4) on Jan. 20 at 1 p.m. in the Bobbi Brown & Steven Plofker Gym. This game is a key matchup in the Lions’ playoff hunt as well, as a victory would negate their earlier loss to the Bears if the playoff came down to a tiebreaker between the two.