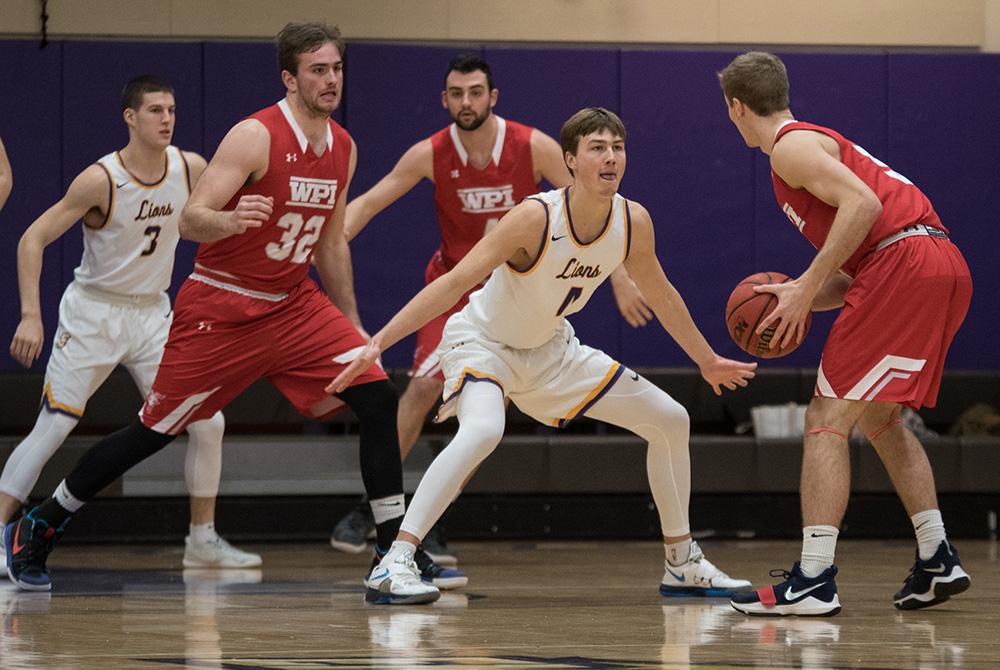 A loss to WPI on Wednesday knocked Emerson behind the Engineers and into fifth place in the conference, still leaving the Lions in playoff position.

The break was highlighted by a 97-93 road win over Clark, after which the NEWMAC named junior point guard Geoff Gray defensive player of the week. Gray scored 19 points and added 14 rebounds and nine assists to fall just shy of a triple-double in the victory against the Cougars.

Emerson’s win against Clark came after an 87-79 home victory over Coast Guard in its first NEWMAC game.

Sophomore forward Ben Holding stepped into the starting lineup for the first four games of conference play, and scored a team-high 22 points in 24 minutes against Clark. Holding joined Gray, seniors John Geary and Michael Sheng, and sophomore Jack O’Connor in the starting five for each of the team’s first four NEWMAC games. Junior center Mac Sashin drew the start against WPI.

The two early wins were followed by back-to-back losses against MIT and Springfield, who rank first and third in the conference respectively. In the Jan. 13 loss to Springfield, Emerson led by three at halftime but was then outscored 44-21 in the second half en route to an 80-60 loss.

The 2-3 conference record represents an upgrade from a year ago, when the Lions started NEWMAC play with a nine-game losing streak, which included losses to Clark and Coast Guard.

OTHER NOTES
— On the stat sheet, Sheng is converting 91.2 percent of his free throws this season, ranking him first in the conference.

— Gray is up to 888 career points, putting the 1,000 point threshold within reach in his junior season. Gray currently ranks second in points (20.2) and rebounds (8.9) per game in the conference.