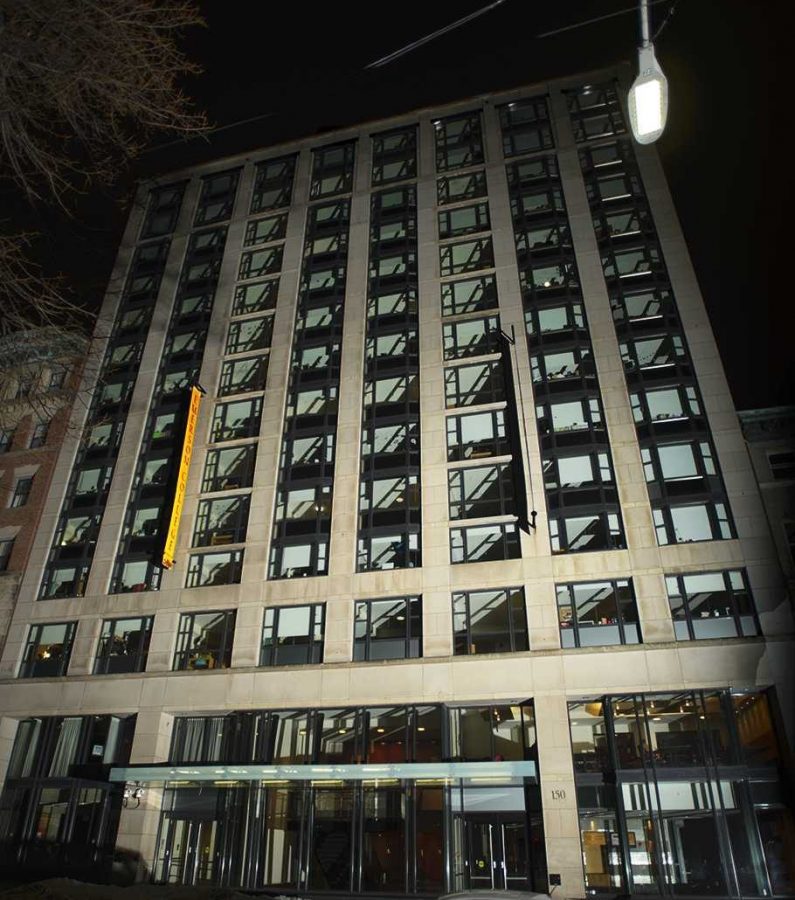 Piano Row pictured in 2015. The swastikas were found in a stairwell located in the dorm. Archive photo.

Emerson has announced the college will raise its tuition for the Fall 2015 semester, according to a letter to parents sent this month and signed by President M. Lee Pelton and Board Chairman Jeffrey Greenhawt. The increase is part of a steady escalation of tuition costs in the last 20 years, according to Emerson’s online course catalogs.

But for new students entering in Fall 2015 or later, the price will jump to $40,320, according to official documents.

“The new students who arrive in the fall are who will be paying tuition at a higher base rate,” said Andrew Tiedemann, Emerson’s vice president for communications and marketing. “They’re the ones who are going to benefit from these new investments.”

Sophomore Uyen Le said she knew that there had been an increase in tuition, but that she was surprised by the amount.

“I think the rise in tuition has put a lot of stress on the student body here, and their families,” the marketing communication major said.

Emerson is also budgeting for renovation of newly acquired space at 1-3 Boylston Place, expected be ready for students to move in by Fall 2017, and a refurbishment of the Little Building slated to be finished by Fall 2019, according to the letter.

Tiedemann said tuition increases are also necessary to account for annual salary increases for professors, and upkeep of faculty health benefits and institutional necessities, such as heat and electricity.

When Emerson announced that it would be raising tuition for Fall 2012, Pelton and Greenhawt said they would explore new sources of revenue, including looking to increase Emerson’s endowment and financial investments via donations.

Emerson has historically been highly dependent on tuition for revenue. In the 2014 fiscal year, Emerson relied on tuition as 93.8 percent of its revenue, according to official financial statements. And this number hasn’t been decreasing: in 2011, tuition accounted for 90.4 percent of Emerson revenue, according to official financial statements.

Tiedemann said he is pushing for more fundraising, but establishing a fundraising base can be a lengthy process.

“Emerson fundraising, going forward, is to engage the alumni in the vision for who we are and where we’re going,” Tiedemann said.

Earlier this month, the college received its single largest donation in history—$2.5 million—but it is only for the Los Angeles program.

In 2012, Emerson also said it would also create an Efficiency Task Force, which Tiedemann said is designed to reduce costs in Emerson’s operations.

“Even with that, BU’s increase is still more dollars, even if it’s only $100,” Tiedemann said. “Even at the lower percentage, they’re still raising tuition faster than Emerson, dollar-wise.”

“[The cost of tuition] is all just large amounts of money, and you can’t keep track of that,” said de la Canal. “I don’t think that’s the way it should be, but that’s the way it is, so I guess we just have to shrug and take it.”

Tiedemann said he is aware of the burden these tuition increases can be on students and their families and, said he and the college are working to stem the rise.

“Tuition is going to have to come down at some point,” de la Canal said. “It can’t go up forever.”