With limited options, a kosher student looks for dietary solace 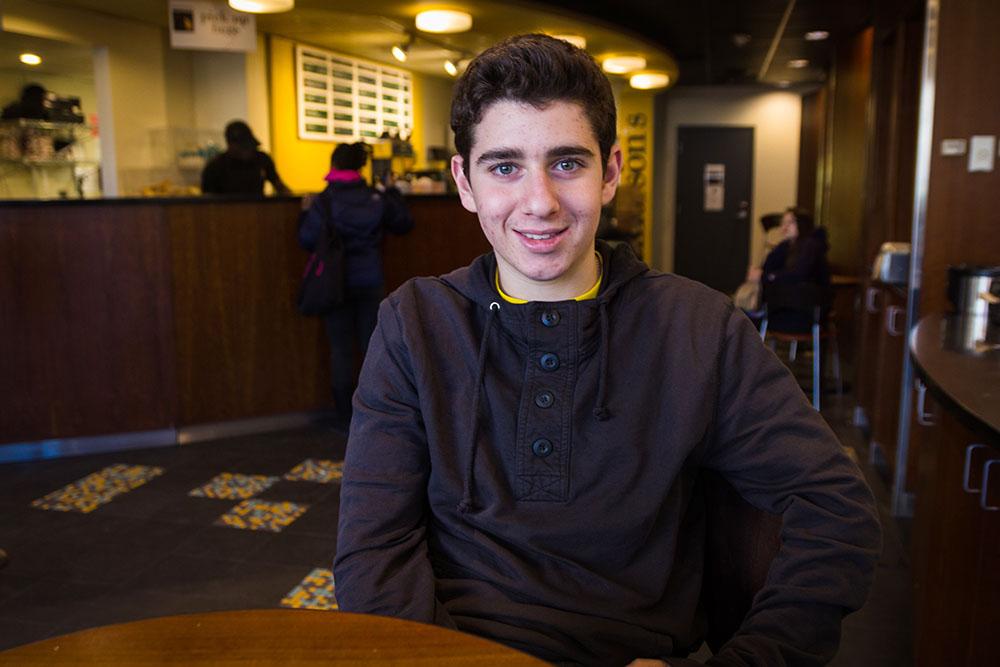 After walking into the dining hall, Gabriel Volcovich begins his hunt for kosher food, which the freshman said is often in limited supply. After scoping out the different options, Volcovich lands at the “home cooking” station, and orders pasta and salad. However, he said eating at Emerson is not always this easy.

Volcovich, a Jewish freshman, said he has been eating kosher since age nine. In his first semester at Emerson, he said he has found ways to adapt in the dining hall and other campus eateries.

“I’ll check everything out beforehand,” said the visual and media arts major. “I can usually count on the vegetarian station as a last option.”

Volcovich said that the dining hall cannot be completely kosher because it does not have separate sets of plates and cutlery for milk and meat items, an element of keeping kosher. But Volcovich said he has worked with the dining staff to accommodate his dietary needs by doing his own grocery shopping, although the college does not cover the costs.

“I’ve tried bringing my own kosher patties to be grilled separately,” he said. “When I first wanted to do that, I went to the dining hall manager. He was Jewish and completely understood. I just had to supply the food.”

Keeping kosher includes avoiding foods that are “unclean” (such as pork and shellfish) and not eating products that mix milk and meat products, like cheeseburgers. During the week of Passover, members of the Jewish community also refrain from consuming leavened foods such as bread or cookies, and oats.

Volcovich said that he was inspired by his family to make kosher eating a permanent part of his life.

“My grandparents and some of my cousins were kosher,” Volcovich said. “After moving from Mexico City to Toronto, it became sort of a comfort tool, something to be a part of with my family.”

Although he said he has become comfortable with his kosher life at home, Volcovich said the transition to Emerson has been more challenging.

“Sometimes there really aren’t options for me,” Volcovich said. “I completely avoided the dining hall during Passover. When you’re Jewish, even if you don’t keep kosher year-round, you try to keep it during Passover.”

During Passover, which started at the end of March, Volcovich said he relied on kosher food from The Butchery, a grocery store in Brookline. He said he also received food from kosher meals set up by Emerson’s Hillel club. Karen Nahary, the advisor for Hillel at Emerson, said that Volcovich is not alone in his struggle for creating kosher meals in the dining hall.

“Students have come to me before,” Nahary said. “A lot of them who want to eat kosher have trouble here.”

Volcovich said that Emerson’s Hillel has been helpful in getting the food he needs.

“Karen’s been very good to me,” he said. “I was able to get leftovers from Hillel dinners, and that helped to stock my fridge.”

Currently, Emerson does not provide kosher options, according to Karen Dickinson, director of business services. Dickinson said she has never received complaints about this.

“Emerson’s Dining Hall does not have the appropriate space or infrastructure needed to support kosher options,” Dickinson wrote in an email. “I personally have not received complaints regarding kosher options.”

Volcovich said that he hopes Emerson will consider adding more options for kosher students, although he is unsure how many there are on campus.

“I know this would be difficult,” he said. “The kitchen would need to have a kosher stove. A rabbi would need to certify the meat. It’s a lot to ask for. But even if we got a separate counter — like they have for gluten-free students — with, like, pastrami or salami for sandwiches, that would be great.”

Volcovich said that the Hillel at Boston University has its own separate dining space, providing the students with more food options. Christina Leal, director of food services, said that students are always welcome to make suggestions to Aramark.

“We meet regularly with students who identify themselves as having food allergies, gluten intolerances or special dietary needs, and assist them in creating individualized meal programs,” Leal wrote in an email. “We have not had any requests for kosher dining options but would be happy to discuss this topic with any interested students.”

With no kosher station currently at Emerson, Volcovich said he looks forward to returning to easier dining at home with his mother’s cooking.

“We’d have a traditional meal every Friday night,” he said. “When I cook here, it’s mostly kosher eggs, and chicken fingers that I’ll freeze for the next week. I plan ahead. I have to survive on what I have.”