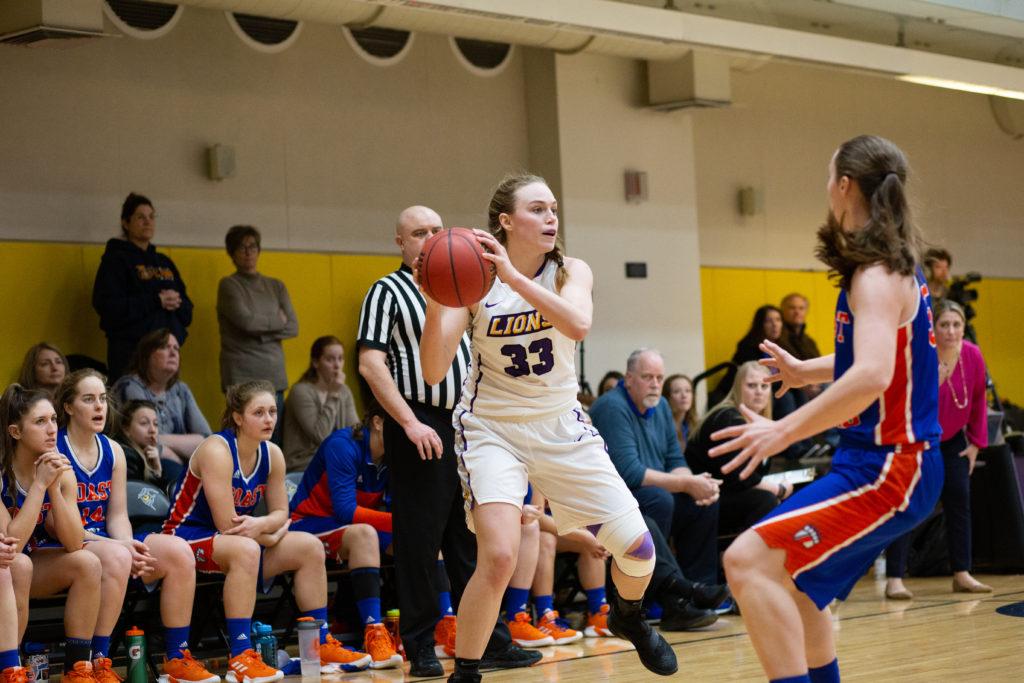 Senior Charlie Boyle (No. 33) tied her career record of 35 points scored in a single game in the Lions' win over Springfield. Photo by Alexa Schapiro / Beacon Correspondent

The women’s basketball team survived triple overtime against Springfield College on Wednesday night by beating the Pride 89-84 for the first time in the team’s history.

The Lions held a consistent yet small lead through most of the first three quarters in regulation and led 40-38 at the end of the third quarter. In the fourth quarter, Springfield outscored the Lions 19-17, which left the score tied 57-57 at the end of regulation play.

The second overtime period remained very close through the first 3 minutes and 19 seconds, with the Lions leading Springfield 72-71. Back-to-back field goals made by Springfield left Emerson in a three-point hole with 11 seconds left. However, junior guard Kate Foultz made a clutch three-point shot to send Emerson into triple overtime.

The third overtime period started out close—similar to the two previous periods. A three-point jump shot made by sophomore guard Ashley Toner put Emerson up 83-79 with 2 minutes and 3 seconds left in the period. The Lions held their lead for the remainder of the period to secure the 89-84 victory, which made this their first win against Springfield College in women’s basketball history.

Senior forward Charlie Boyle’s performance was a highlight for the Lions Wednesday night. She matched her career record of 36 points per game and was one free-throw away from passing it.

“I was kind of frustrated I didn’t make that last free throw,” Boyle said in a post-game interview. “It was great because both of the 36-point games I’ve had [have been] against teams with really strong post players. It means a lot because it shows how far I’ve come [as a player].”

Head coach Bill Gould said he did not understand the inconsistency of the calls made by the officials.

Despite the frustration caused by the officials, Gould commended the team for their perseverance.

“[The team] said that we’re going to win the game and we don’t care,” Gould said. “Even though it doesn’t always show up on the scoreboard with the individual stats, every kid contributes and doing everything we’ve asked them to do to the best of their abilities.”

The women’s basketball team will play their next New England Women’s and Men’s Athletic Conference game at Clark University on Saturday, Feb. 9 at 1 p.m.