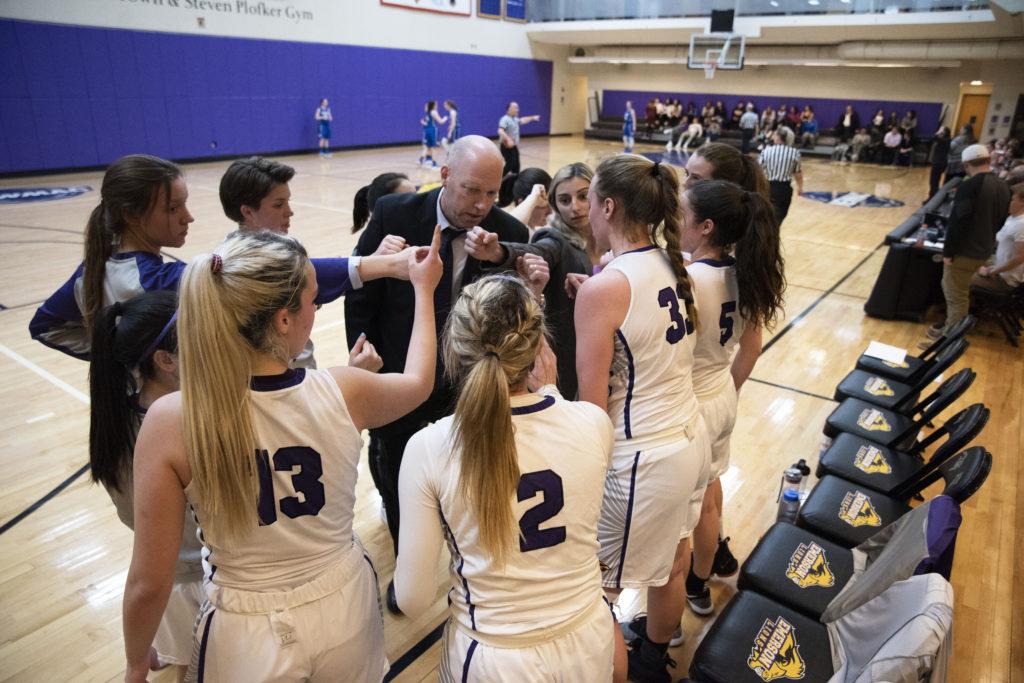 The Lions huddle before tip off in a game against Wheaton on Jan. 23. Photo by Daniel Peden / Beacon Staff

Women’s basketball head coach Bill Gould received the conference Coach of the Year award this season for his accomplishments in leading the Lions to an undefeated home record.

In his eleventh season as head coach, Gould led the team to its best record since the 2008-09 season when he was named the 2009 Greater Northeast Athletic Conference Coach of the Year. The women’s basketball team left the GNAC and joined the New England Women’s and Men’s Athletic Conference in the 2013-14 season.

The Lions lost to fourth-seeded Massachusetts Institute of Technology in the quarterfinals of the NEWMAC playoffs.

Gould said everyone who helped with this year’s success deserves credit for the award.

“I’ve been talking to a few of the players and the other coaches and administrators, and they’re all congratulatory,” Gould said. “I’ve said this to them, and I genuinely mean it, this should be the ‘team of the year award.’ I’m the same person, good or bad, that I was last year. What’s different is that these kids really just played phenomenally.”

Senior center Charlie Boyle earned First-Team All-Conference honors and finished her career with an average of 12.1 points and 4.9 rebounds per game. Junior guard Kate Foultz made the NEWMAC All-Sportsmanship Team.

The nine head coaches in the conference voted on the awards. Boyle also became the fifth woman in Emerson basketball history to join the 1,000 point club this year.

Gould said the team’s wins over key opponents in this season were the primary reason the NEWMAC awarded him and two players with honors.

“Any credit really does go to [the players]—we had a phenomenal year, and they played huge in some really big games,” Gould said. “We beat Babson [College] for the first time ever, we beat Springfield [College] for the first time ever, we had a great game against Smith [College]. I got the Coach of the Year award because the kids played great in those games—that is really what it boils down to.”

The Lions defeated Springfield 89-84 on Feb. 6 in triple-overtime—their highest scoring game of the season.

“It’s very exciting. It really solidifies our place in the conference,” Nicol said. “I think that we have arrived, and it’s been a process and it’s been an interesting journey. I’m just so proud of the coaches and the athletes. We have progressed every year, and it’s just such a good feeling and it’s something that’s just so deserved.”