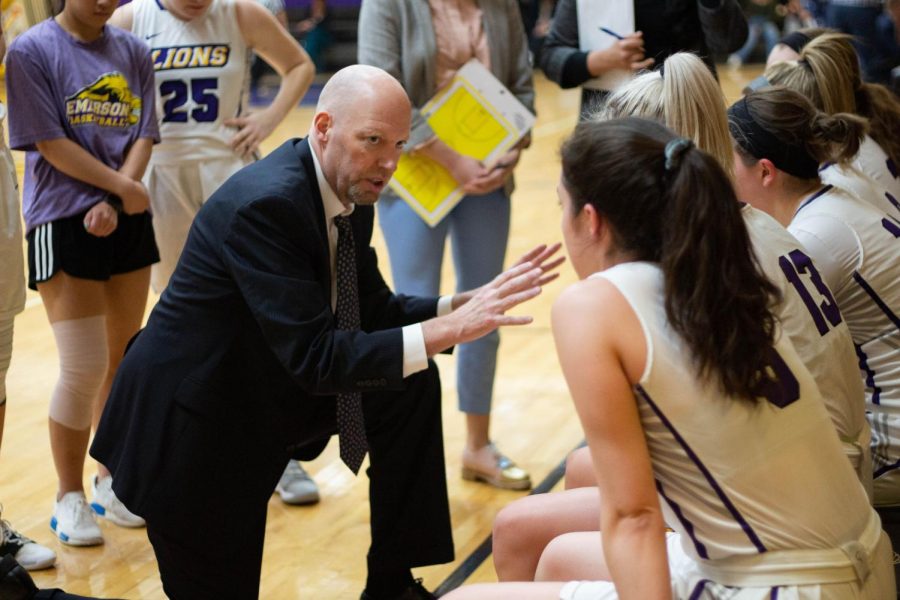 The Lions hit a season high 20 free throws on 25 attempts in their 65-55 victory over Fisher College.

The women’s basketball team pulled away from Fisher College late in the fourth quarter to earn a 65-55 victory over its opponent opposite of the Public Gardens.

Emerson held the lead going into the half, but Fisher kept the margin close, keeping the game within seven points. The two teams went back and forth, with the lead changing ten times as each team mirrored the other’s positive or negative play.

The Lions gave the ball up 26 times throughout the game, tying their season-high against Lasell College on Dec. 10. Head coach Bill Gould said the turnovers affected the game, but thankfully not the result.

“We chatted already about that,” Gould said in a post-game interview. “It is too many against a team that really didn’t force us to have that many turnovers.”

This was not necessarily because of Fisher’s pressure on defense, but more of what Gould described as a “start-to-school lag.”

Besides the miraculous half-court heave from Fisher senior guard Vivian Lara that ended the third quarter, giving the Falcons with a three-point lead, their largest lead all game. The Lions crawled their way back into the game thanks to a three-point shot from junior guard Rachel Davey.

Senior guard Quinn Madden stood out with 21 points and four assists to lead the offense. Junior forward Sam Boyle kept the Lions in the game at the free throw line, shooting seven out of eight before finishing with 18 points, three assists, and five rebounds.

“It was a really good team win,” Madden said in a post-game interview. “We were doing our fundamentals the whole time. It was weird because it felt like we were doing so well and the score would be really close, but then by the end we stuck with what we were doing and it paid off.”

The Lions will now enter New England Women’s and Men’s Athletic Conference play against Smith College on Jan. 18 and will host five of their next six games against conference opponents.