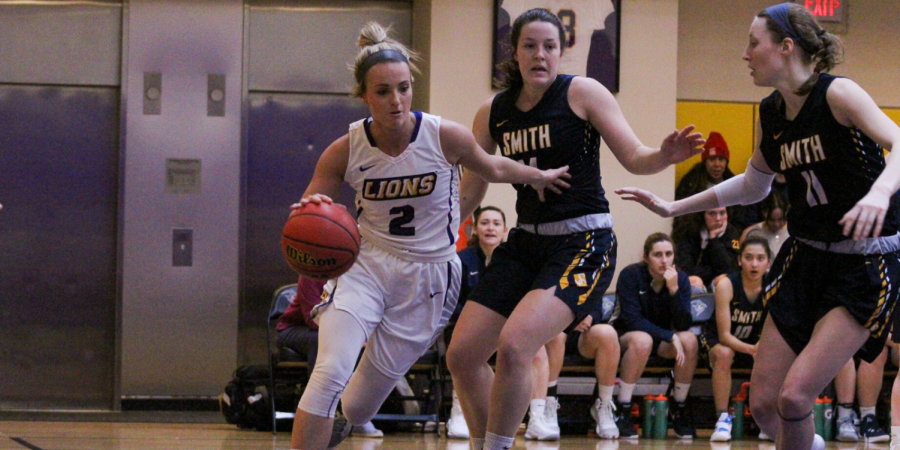 The Lions defeated Smith College in their first conference game of the season with the help of a combined 49 points from junior guard Rachel Davey and senior guards Quinn Madden and Natalie Clydesdale.

“I like being undefeated in the conference, we’re tied for first right now,” head coach Bill Gould said in a post-game interview. “These kinds of games help kids. It gives them a little bit of confidence that they can play in these kind of games.”

The Lions faced a challenging opponent in the 14-1 Pioneers in their first conference game of the season. The Pioneers took a 20-17 lead at the end of the first quarter, but the Lions kept the game even and tied the score at 33 going into halftime.

The Lions ran into foul trouble in the second half by picking up six fouls in the third quarter alone and allowing the Pioneers to gain momentum.

The Lions’ offense began to heat up in the final quarter with made shots from sophomore guard Rachel Davey, who scored six points in the closing four minutes and finished with 16 points on the game.

With 37 seconds remaining, Smith’s Amelia Clairmont scored a breakaway layup to bring the game within one before Davey stole the ball on the team’s next possession to solidify the win for the Lions.

“We only get to play every team once in conference now, so every game is super important,” Davey said.

The Lions will host Mount Holyoke College on Jan. 22 at 7:30 p.m. for their second NEWMAC game of the year.