Women’s basketball season comes to a close in NEWMAC quarterfinals 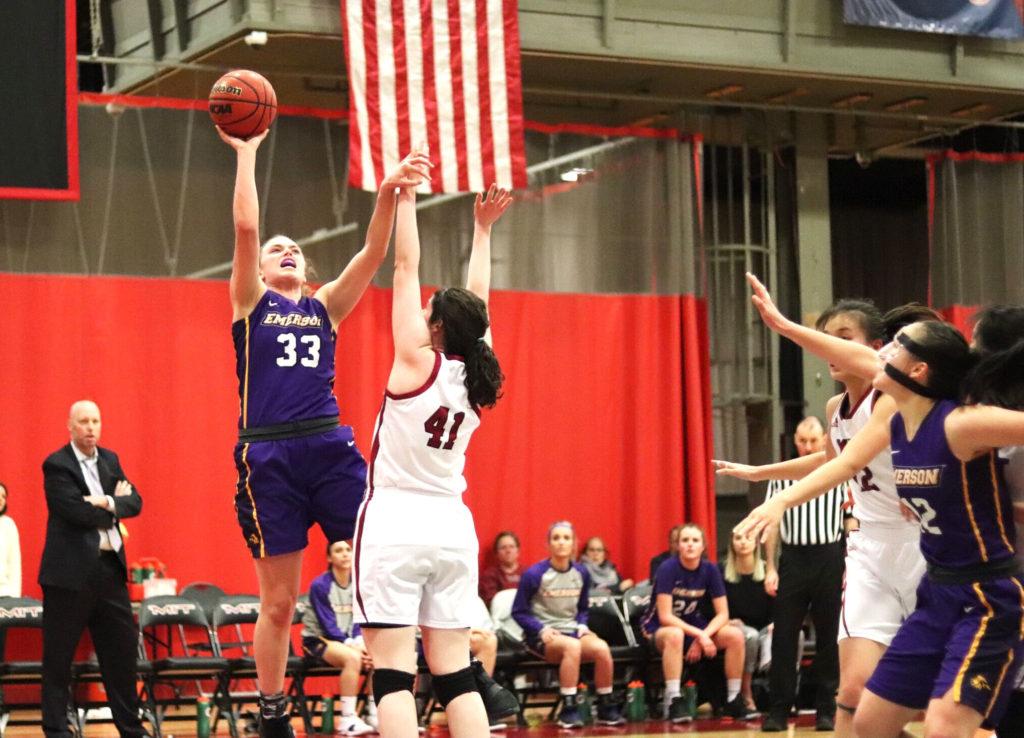 Senior Charlie Boyle (left, No. 33) goes up for a layup and senior Natalie Busch (right, No. 12) waits for the rebound in the NEWMAC quarterfinals against MIT. Photo by Arturo Ruiz / Beacon Correspondent

The women’s basketball team lost to Massachusetts Institute of Technology 76-58 in the quarterfinals of the New England Women’s and Men’s Athletic Conference playoffs on Tuesday.

The Lions entered the conference tournament as the fifth seed and matched up against fourth-seeded MIT in the first round.

MIT opened the first quarter with a three-point basket from senior guard Kristen Ngan and continued a strong offense to increase its lead to 9-0. The Lions did not tally a point until sophomore Sam Boyle scored a layup three and a half minutes into the quarter. The quarter ended in favor of the Engineers at 23-16.

The Lions opened the second quarter with two-point jump shots from sophomore Ashley Toner and junior Quinn Madden, which decreased MIT’s lead from seven to three. The Engineers went on a 9-0 run to give themselves an eight-point lead. The Lions responded with six points of their own but trailed 37-29 at the end of the first half.

The Lions committed five turnovers in the third quarter, but senior guard Natalie Busch’s incredible offense kept them afloat. She scored 11 of the team’s 13 points in the quarter to make it a two-point game into the final 10 minutes.

The Lions experienced a downfall in the fourth quarter as they committed nine turnovers compared to the Engineers’ two. This allowed MIT to outscore Emerson 27-11 before winning by a score of 76-58.

In a post-game interview, head coach Bill Gould said the players should keep their heads high because of their successful season.

“The positive is the whole year,” Gould said. “I think we’ve done a really nice job becoming one of the best teams in the NEWMAC, and I don’t think many thought we could do it.”

Gould said Busch’s performance in the third quarter was a significant part of the Lions’ potential comeback.

“I know [Busch is] such a hard working kid,” Gould said. “She has such an incredible basketball IQ and she gave it everything she had.”

This was Busch’s and Boyle’s final game for the Lions.

Even though the team’s 2018-2019 season ended with a loss to MIT, Gould said the team should be ready to practice for next season as soon as next week.

“They obviously should take some time to recover a little bit,” Gould said. “Next year starts in one week. They need to get in that mindset and start next [season] with the same mindset they had this year.”