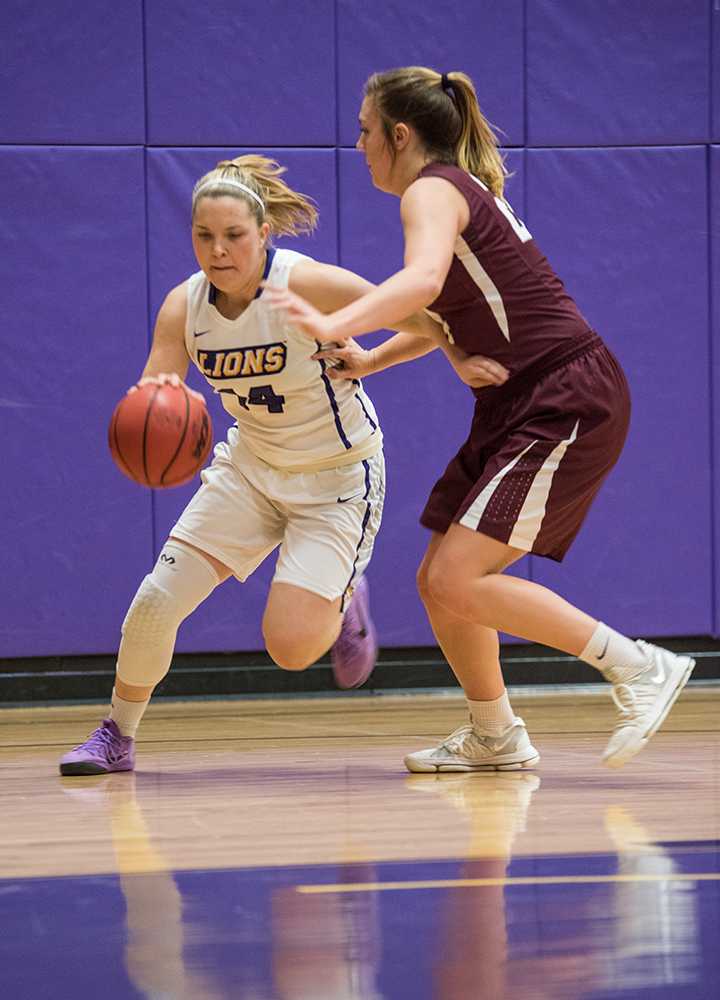 Sophomore Kate Foultz drives to the basket against Springfield. Emerson lost 72-60 on Saturday.

While the Lions could not avenge their previous 30-point loss on Jan. 13, this performance was a step in the right direction for head coach Bill Gould.

“I think the number one thing is that the kids player better,” Gould said. “The first game just wasn’t good. We lost, and I’m not about moral victories but this game was a better performance and it was overall a better situation.”

Rebounding made a difference in the game for the Lions, as Springfield outrebounded them 47-24, which included 16 offensive rebounds. Junior forward Gracie Restituyo carried Springfield, earning her second double double in her last three games with 17 points and 14 rebounds.

“[Springfield is] very good at offensive rebounding,” Boyle said. “[Restituyo] is a tank and you got to push her out. They’re very good at getting the boards.”

Junior Chelsea McAllister led Springfield in scoring for the third consecutive game, scoring 18 points. McAllister shot 6-of-11 from the field, making four of her seven shots from beyond the arc. Alex Goslin was also in double digits for the Pride, scoring 14 points.

The Lions got off to a slow start, as they only scored two points within the first five minutes. Springfield made them pay by going on 10-0 run to open up the game. Emerson bounced back in the second quarter, as they equalled Springfield’s 17 points scored to go into the break with the score 36-27.

Sam Boyle led the Lions in scoring with 12 points, despite shooting 1-of-4 from the field in the first quarter. The freshman found herself down low for most of the game, a position she said she does not find herself in often.

“I’m not usually a post player, so what I needed to do especially with a team like this was play a lot harder at the post and go up stronger,” Boyle said. “That’s something I’ve been working on, finishing harder towards the basket, so I think that’s something that helped me score a lot more.”

Some of Emerson’s top scorers had off days in this game, as Natalie Busch followed up her career high 26-point outing at Wheaton with only eight points and a 27 percent field goal percentage. The team’s leading scorer this season, Kate Foultz, only managed five points on 2-of-7 shooting.

Gould recognized the Lions’ first quarter struggles, but said he was proud of his team’s performance for the rest of the game.

“We gave up too many offensive rebounds and we were just too rushed with our shots,” Gould said. “The rest of that game after the first quarter—I’d take that all season long. We’ll win games, including in the playoffs, if play like we did in the [second, third, and fourth quarters] for the rest of the season.”