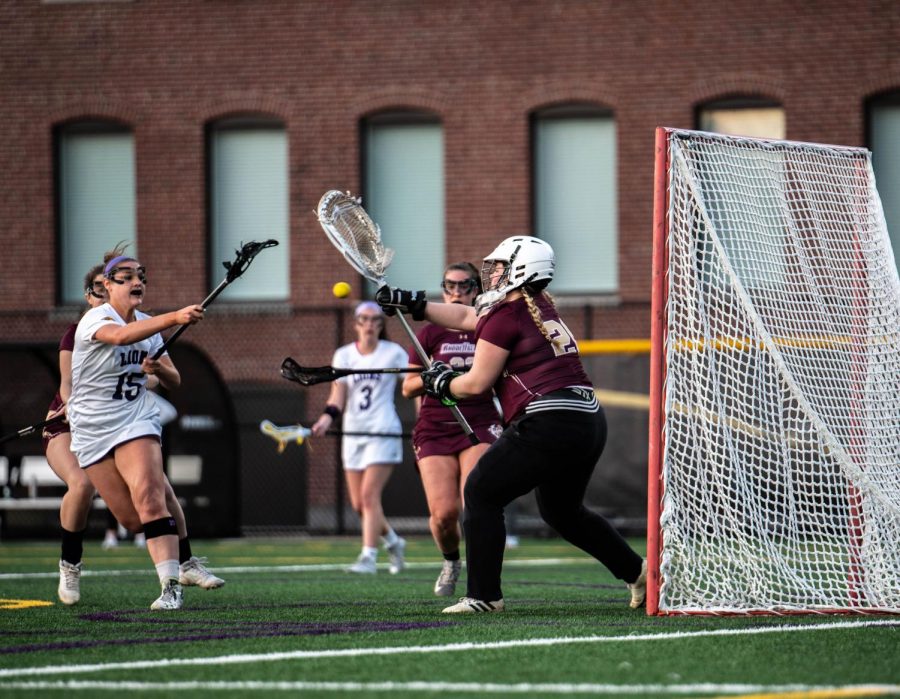 Jenna Tomsky scored 14 goals in three games for the Lions

The women’s lacrosse team won its first game since 2017 on March 7 against Rhode Island College by a score of 17-5. The Lions won again on March 9 with a 17-4 victory over Nichols College. Head coach Jessie Koffman said the team deserves some recognition after the early cancellation of their season.

“Everyone was glad that we were able to grab the last weekly honors,” Koffman said in a phone interview with The Beacon. “It makes kind of a statement for next year that we are able to do this, and it leaves the team in good spirits because it is something that we can go off of, even though our season was cut short we can end on a positive note.”

Khosla said the team made a list of goals before the season began to be accomplished throughout the year.

Khosla said she plans to continue her training to expand on the success and excitement the team gained this season.

“It is all about team bonding, and this team has amazing chemistry, and I hope we can continue that culture with the incoming freshmen after our senior team captains leave,” Khosla said.

Tomsky shot 70 percent this season while scoring 14 goals and adding four assists. She tallied 18 points on the season and forced 10 turnovers. Tomsky placed eighth in the NEWMAC for shooting percentage and is in sixth for total goals scored this season.

“I really wasn’t expecting to get anything with all of the chaos that happened, but it was really exciting that they are still counting this week because I thought I played kinda well,” Tomsky said in a phone interview with the Beacon. “It’s very bittersweet.”

Tomsky said she is still proud of the team’s improvement and accomplishments this season even though its season got cut short.

“I think it means a lot more that Nina Khosla also was awarded something,” Tomsky said. “You know that we haven’t won a game in two years, so I am just proud that both players of the week are both Emerson players.”

Tomsky said she plans to stay in the Boston area after graduation and is interested in joining club lacrosse in the near future.

“I am a [Visual Media Arts] major and a marketing minor, and I really came to love marketing this year, so I think that is where I am headed,” Tomsky said. “I would love to incorporate lacrosse in any way I can into my career and life.”

Koffman said the team hopes to build off the foundation they developed this season going into next year.

“Even though it was only two wins, being able to work off of that and being able to look back in this past pre-season to continue our growth with the incoming freshmen next fall,” Koffman said.