Women’s lacrosse says bye to four seniors, see you later to one 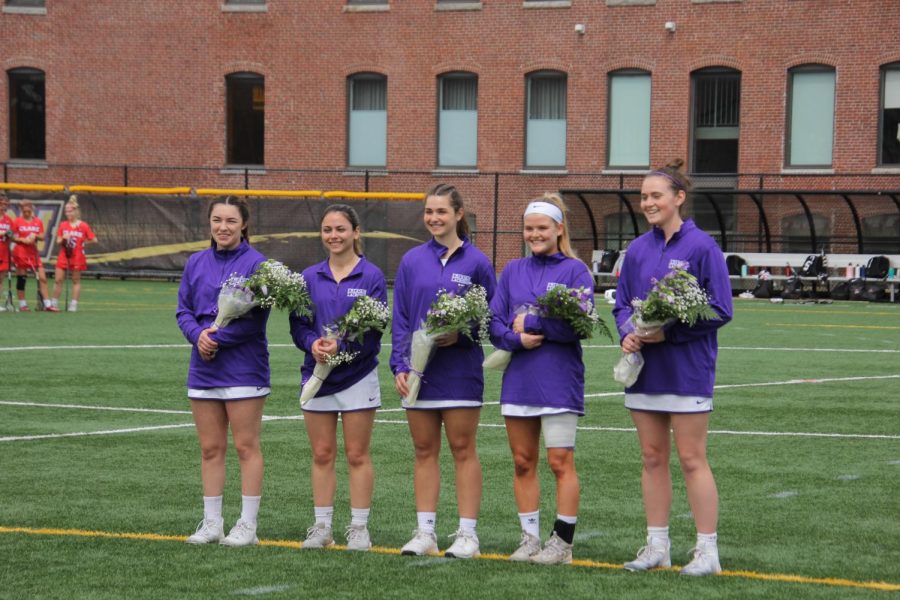 After years of winless seasons and canceled games, the Emerson women’s lacrosse team rebuilt its roster and posted its best record since joining the NEWMAC in 2014. The senior class played a key role in the team’s rebuilding period, contributing heavily to this season’s success.

As with most other athletes in Emerson’s class of 2022, the seniors of the women’s lacrosse team experienced a uniquely challenging career, with several of their seasons cut short or outright canceled due to the pandemic. For players like co-captain Amelia Toscano, the lost time made this season’s accomplishments even more special.

“With COVID, we haven’t really been able to see all the potential we could have,” Toscano said. “Coming to the end of the season feels good. I’m really proud of the team and how much we’ve accomplished.”

Three of this year’s five graduates started at Emerson during the same season as current Head Coach Jessie Koffman. She said watching the players find their roles as players and women has been rewarding.

“It’s been very fulfilling to see these players grow from their freshmen year to now,” wrote Koffman in a statement to The Beacon. “They have all really come into their own and it’s a great process to be a part of.”

The seniors also credited Koffman with this season’s success, saying she played a large role in shifting the dynamics of the team on the field, in the weight room, and beyond. Toscano said Koffman is one of her team’s biggest supporters.

“She always has me and my teammates’ backs,” Toscano said. “It’s been a pleasure being one of her players, and it’s nice because we’ve grown together throughout the last four years.”

“It’s hard as a coach to come into a program and rebuild it, but I think she’s done a fantastic job,” Burns said. “She’s really supportive of us, no matter what we want to do. She’s supportive and compassionate and pushes us when necessary. She’s been great.”

The past four years have been rebuilding years for both Emerson’s men’s and women’s lacrosse programs, with the men’s teams going from 4-68 overall to 11-4 this year and the women’s team shifting from 33-60 overall to 9-5.

Burns said she’s proud to have been part of the team’s growth. For her, being a leader throughout the process made seeing the team’s shift particularly exciting.

“To come in here and see the change from freshman year to now is extremely rewarding,” Burns said. “There’s a lot to be said for sticking with a program throughout its rebuilding… Being captain the past two years and being part of that growth has been one of the most rewarding things.”

Part of this shift has come with the development of team culture—much of which has been cultivated by the seniors, according to Koffman.

“The seniors have set the standard for work ethic and what is expected of players,” Koffman wrote. “They have been a key part in the growth of this program and their hard work will continue to shape this program… Our captains have been crucial in the growth and commitment to this program. They lead by example and really work hard in all they do.”

Co-captain Ainsley Basic said this culture allows players of all ages to make an “immediate impact” on the field. The sense of inclusion and camaraderie among the team, coupled with a newfound thankfulness for the opportunity to play an uninterrupted season, has contributed heavily to the team’s success, she said.

“Since [my freshman] year, we’ve just been working hard and playing with gratitude because we know that at any point the season can be taken from us,” Basic wrote in a statement to The Beacon. “There was a lot of excitement to finally get a full season. Everyone came into it with a new sense of appreciation for the time we get on the field.”

Midfielder Julia Mallon said the class of 2022 showed a resilience that helped the rest of the team persevere through difficult times. For Mallon and the other seniors, this year is a testament to hard work and dedication.

“The fact that we lost every game freshman year, had two basically canceled seasons, and still showed up every day senior year ready to play just shows how committed, determined and passionate we are and how much we love the team,” she said.

For Basic and Hannah Beck, both of whom are graduating a semester early, this season marks their first—and last—undergraduate college lacrosse season. Beck, however, will return to the field as a graduate student next spring. She said she is glad this season won’t be her last and added that she looks forward to continuing her career and leaving a legacy of team culture for future players.

“As a team, we’ve always had great chemistry,” Beck said. “Everyone is happy to see each other succeed and be a part of that. It’s been that way since my freshman year and I know it will be like that even after I leave.”

The Lions won their Senior Day faceoff against Clark University 16-4. They will return to the field on April 23 against Smith College.