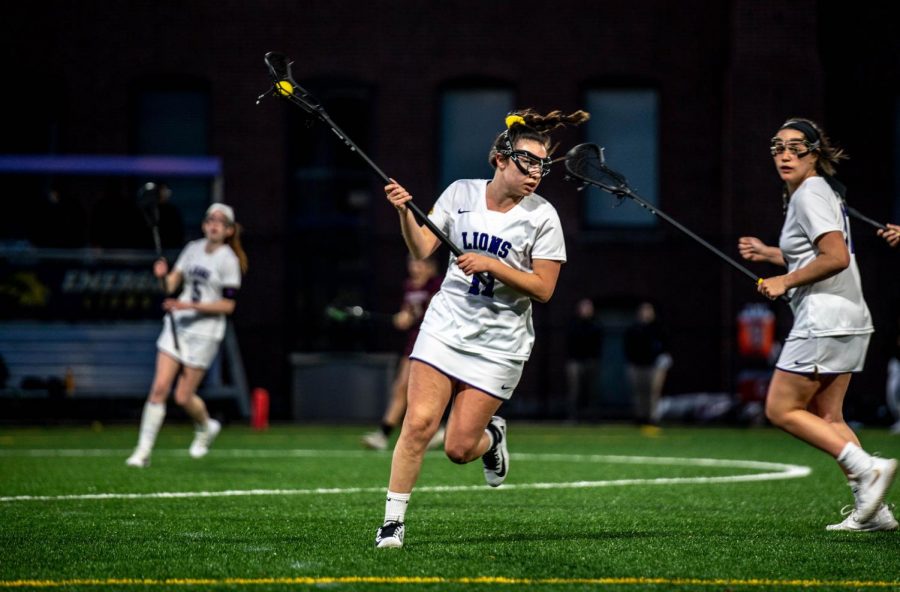 The Lions totaled six more ground balls than the Anchormen on Monday.

The women’s lacrosse team broke a streak of 29 consecutive losses on Monday with a 17-5 victory over Rhode Island College.

In the opening three minutes of the first half, Mumford and Tomsky each recorded a goal, giving the Lions an early 2-0 lead.

“I could just tell the energy was really great when we got here,” Koffman said in a post-game interview. “They were excited in the locker room, and that translated on the field. We did everything right that we needed to do.”

The Anchormen rallied to tie the game at two goals with 24:11 remaining in the half, but the Lions scored the next five goals, including two by junior midfielder Kelli Mark.

Rhode Island added a third goal to its scoring total, but the Lions answered with three of their own to go into halftime with a 10-3 lead. The Lions forced 19 turnovers in the first half and controlled 15 of the 24 draws.

An 8-2 ground ball advantage helped the Lions grow their lead in the second half. Mumford opened the scoring 39 seconds into the second period, and the Lions outscored the Anchormen 7-2. The Lions outshot Rhode Island 33-10.

“We all just had the mindset that we’re capable of winning, and we played the full 60 minutes, and I think we just out-played them and out-hustled them,” Mumford said in a post-game interview.

As one of two seniors on the team, Mumford said she is sentimental this season but she said there is more to be accomplished, and she is excited to see what the team can achieve.

For many of the players on the team, this will be their first win since arriving to play lacrosse at the college. Sophomore midfielder Julia Mallon, who led the Lions with five ground balls, won her first career game on Monday.

“It feels good,” Mallon said in a post-game interview. “We’ve been working hard, and I can’t think of a team that deserved it more, but we’re not done yet.”