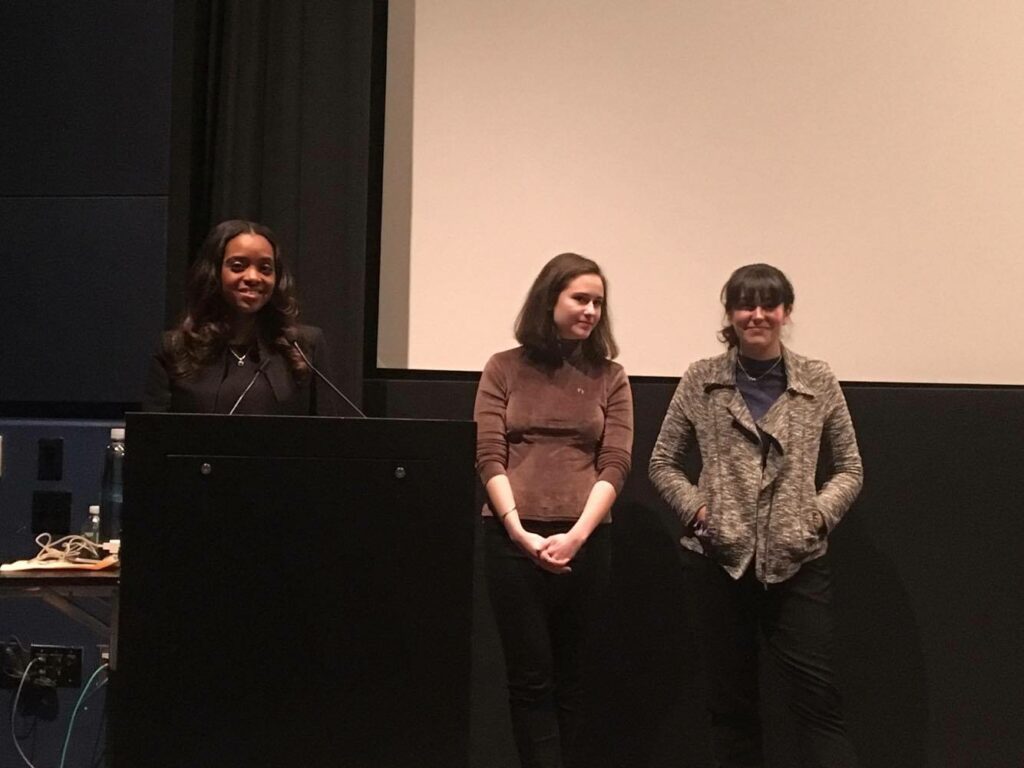 Weeks after the historic Women’s March on Washington, Emerson students gathered in the Bright Family Screening room to show a different kind of solidarity.

Women’s March organizer Tamika Mallory addressed a crowd of a few dozen, talking about topics ranging from healthcare laws to the Black Lives Matter movement. She gave the keynote that kicked off Emerald Empowerment week for Kappa Gamma Chi and spoke at length about the ways people who support the Women’s March need to stay educated and take active roles in their allyship.

Emerald Empowerment is an annual spring campaign, with the keynote being the first of a series of weeklong events hosted by the sorority to raise awareness of sexual assault and domestic violence.

The Emerald Empowerment theme is “Because We Unite,” and the sorority chose Mallory because of her role in uniting people through the Women’s March. Aside from being one of the national Women’s March organizers, Mallory also worked with the Obama administration on civil rights issues, and served as part of the transition committee for New York City Mayor Bill de Blasio. She was also the youngest executive director for National Action Network at age 29, and currently runs her own strategic planning firm, Mallory Consulting.

Samantha Kennedy, a senior performing arts major, was one of the co-chairs of Emerald Empowerment. She said she was inspired by how young Mallory was when she became National Action Network’s executive director, and wanted to bring that influence to Emerson students.

“I think seeing someone who as a young person has had such an impact as a social advocate will hopefully inspire the Emerson community to see how we can actually make change,” Kennedy said.

After a brief introduction about her life, Mallory began her speech with Sojourner Truth’s well-known poem, “Ain’t I A Woman?” Mallory said that for all the same basic decencies Truth sought in 1851, women today face some variation of the same sexism in 2017. She went on to address the different ways her identity defined her awareness of the different oppressions in her life, and how the inequality of women’s rights, especially women of color, goes unaddressed.

“We are told, literally, that we are too loud, we’re too strong, and we’re too proud,” she said in her speech, “I submit to you today that anything short of saying that we’re amazing is an alternative fact.”

Mallory emphasized in her speech that the Women’s March wasn’t a direct response to President Trump, and said the main takeaway from it was the three lessons men, feminists, and allies need to start learning: becoming educated on all forms of feminism, understanding the movement as a bottom-up endeavor that needs to amplify the voices of the oppressed, and most importantly, to change one’s personal politics.

After her speech, a number of students stayed afterwards to talk to Mallory and the leaders of Emerald Empowerment about how students can be more active in the movement on campus. Mallory said she enjoys coming to colleges to talk to students, stressing their importance in great movements as leaders.

She also said following her speech that it was campuses who organized and protested, and that their work in the movement is as valuable as the work in the black church during the civil rights movement. Understanding that part of history that students played in past resistance movements shows students have the power to affect change. As Mallory said: “We got the keys.”