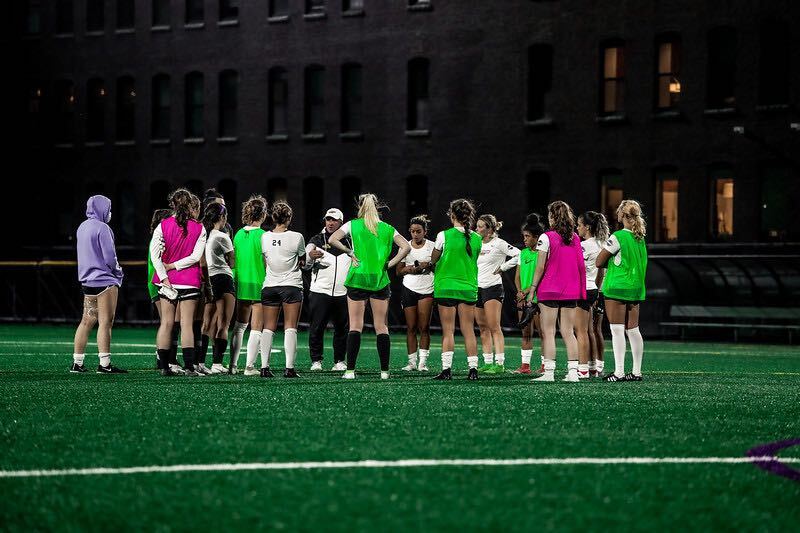 All three Lions were named at the 2019 New England Women’s and Men’s Athletic Conference Women’s Soccer All-Conference Team. Rose and Bruce were members of the first team, while Cosgrove made the second team.

The women’s soccer team was unable to compete last fall as the NEWMAC canceled the fall season due to the COVID-19 pandemic. Head coach David Suvak, however, said he saw enough from these leaders the last time they took the field during the 2019 season to name them as captains for the Fall 2021 season.

Rose becomes a third-year captain after leading the team for the past two seasons, while Cosgrove and Bruce are first-time captains. Rose was named second team all-conference her freshman year, leaving her as the only returning Lion with multiple all-conference accolades.

“[Rose] was an excellent leader the year before,” Suvak said in an interview.

It is rare for a sophomore to be named captain, but Rose has handled it in stride since the beginning. Cosgrove said she learned a lot about what it takes to be a captain over the past two years by observing how gracefully Rose stepped into the role.

“Megan’s always been a leader since freshman year,” Cosgrove said in an interview. “She’s kind of a natural leader. Even when she wasn’t officially named a captain, she definitely had a leadership role on the team.”

Rose will be joined as captain by Bruce, Emerson’s breakout-star center back in 2019. After a strong season her freshman year, Bruce is ready to step into a larger leadership role.

“Cali has a lot of very good club experience with Richmond United, and she is coming in as a very competitive player,” Suvak said. “She is competitive, she is driven, and I think she wants the best for this program.”

Bruce said she believes her learning experience from her first season with the Lions prepared her for this opportunity, despite never being a captain before.

“Having to step into the role of center back kind of suddenly really put me in a different form of leadership position that led me to sort of leading the team verbally from the back line,” Bruce said in an interview. “I had to take on a big leadership role from a very early point in the season.”

Cosgrove rounds out the group of captains after contributing a team-high eight goals as a sophomore in 2019. Suvak highlighted Cosgrove’s positive attitude as one of her strengths as a leader.

“Grace has a very welcoming personality where she motivates players and keeps players engaged,” Suvak said. “So, I think that’s an important role as a captain as well, just bringing the team together and keeping them unified.”

Cosgrove was quick to praise her fellow captains, but also gave herself some credit when reflecting on her soccer career to this point.

“The experience that I’ve had all these years playing on different teams with a bunch of different types of players has put me into a position where I can kind of adapt to anything,” Cosgrove said.

While all three are talented on the field, Suvak said it’s who they are away from the game that made the task of choosing captains easy.

“They’re great people, they really are,” Suvak said. “They all bring something special to the program.”

Rose agreed with Coach Suvak, expressing that she could not have picked a better group of captains.

“I think that they’re two amazing people to lead the team with,” Rose said in an interview. “I’m feeling really optimistic about how they are as people and how they are going to be as leaders, for sure.”

With those three at the helm, expectations are high for when they finally hit the field again next fall. The Lions finished 10-6-3 in 2019 with a young roster that looked set to improve. While they were unable to compete last fall, the team continued to lay the groundwork for future success. Suvak believes the mix of veteran leadership and young talent could yield historic results in the upcoming season.

“I really believe that the team in [2021] will be one of the best teams that Emerson has put out,” Suvak said.

Rose is confident next year’s team will give her and the rest of next year’s seniors a chance to go out on a high note.