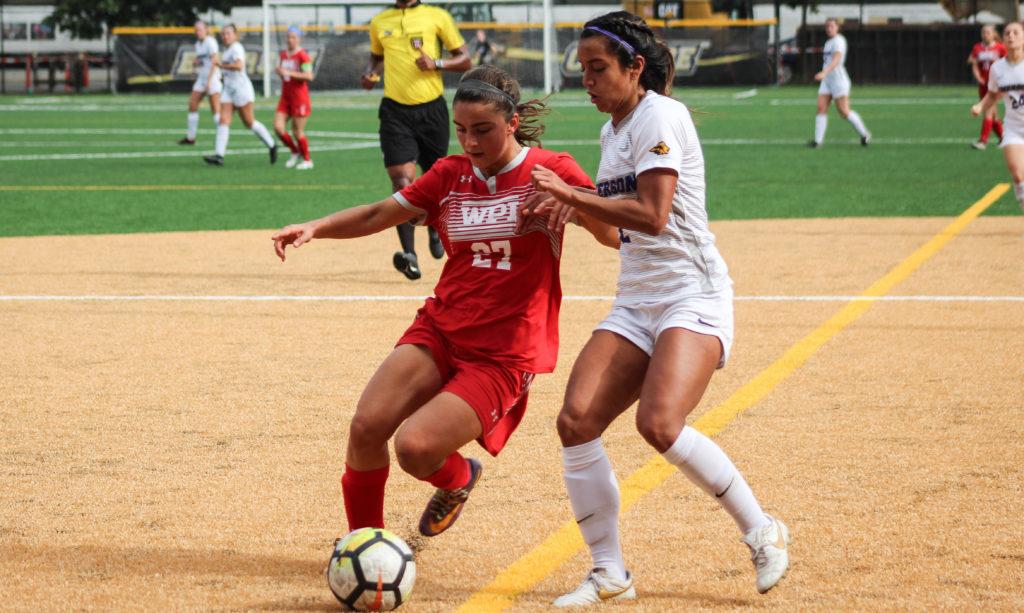 The women’s soccer team’s expectations of a New England Women’s and Men’s Athletic Conference playoff run near reality as the Lions sit in sixth place with a 3-2 record.

The Lions’ first conference loss came against Springfield College—the top-ranked team in the NEWMAC, on Sept. 22. Despite scoring the opening goal in the first three minutes, Springfield pushed back with two goals in the second half.

Head coach David Suvak said despite the team’s loss to Springfield, he’s content with how the team played.

“We gave Springfield a pretty good match,” Suvak said. “It could have gone either way. I’m disappointed for the result in that match in particular, but I am happy in the way our team performed.”

The Lions also lost 3-1 to Worcester Polytechnic Institute, which is ranked fourth in the conference, on Oct. 6.

“I think it’s still super early on in the season, so we can for sure get the next one and the next one, and if we get to five [wins], we’ll be in a very good spot,” Alberts said. “Our two losses really show us what we can do to improve and what we’re capable of, so I think we’re actually in a pretty good spot.”

Suvak said the NEWMAC is a challenging and competitive conference.

“Every match in the NEWMAC is a hard match, and there are no given games that are automatic wins,” Suvak said. “It’s a battle to just get into the top seven.”

The 2018 season for the women’s team began with a major hiccup when freshman goalkeeper Silvia Dowell suffered an ACL injury prior to preseason training. Two other freshman goalkeepers, Megan Rose and Sophia Giordano, stepped up to fill the position. Rose made 72 saves in 11 games—ranking her third for most saves in the NEWMAC.

Rose and Giordano have earned the NEWMAC Women’s Soccer Defensive Athlete of the Week accolade for their performances in conference and non-conference games for the Lions.

Rose said the team continues to improve, and she believes the team is a strong contender for the playoffs.

“I think that the leadership and the camaraderie between everyone have been very helpful,“ Rose said. “As long as we stay consistent throughout our whole game, play possession, and get chances on goal we have a very good chance of getting into the playoffs.”

Last season, the Lions did not make the NEWMAC playoffs—however, with the help of eleven freshman recruits this season, the women’s soccer team has seen a major uplift in competitiveness. Suvak said the freshmen proved themselves as significant additions to the squad.

“I believe that the best player should be on the field, and if that’s a freshman or an upperclassman, then they should be rewarded by their skill,” Suvak said. “Those [players] are proving themselves in matches and in training that they belong there.”

Alberts said the chemistry between the mix of freshmen and upperclassmen contributed to the team’s success so far.

“I think the team chemistry is awesome,” Alberts said. “Having a big senior and freshman class has everyone meshing together very well, and I think team chemistry is one of the most helpful aspects to us in our season.”

Senior forward Jess Frost—who is tied for most goals on the team this season with four—said the team is not only a strong contender for the playoffs, but for an opening playoff home match. She said this would give a significant advantage to the team in the tournament.

“Of course, we are still contenders for the playoffs—we are even contenders for a home game, which is something we would love to have,” Frost said. “We would be the first fall sport to have a home playoff game [in Emerson history].”

The Lions play their next conference game on Saturday, Oct. 13 against Wellesley College at 11 a.m.