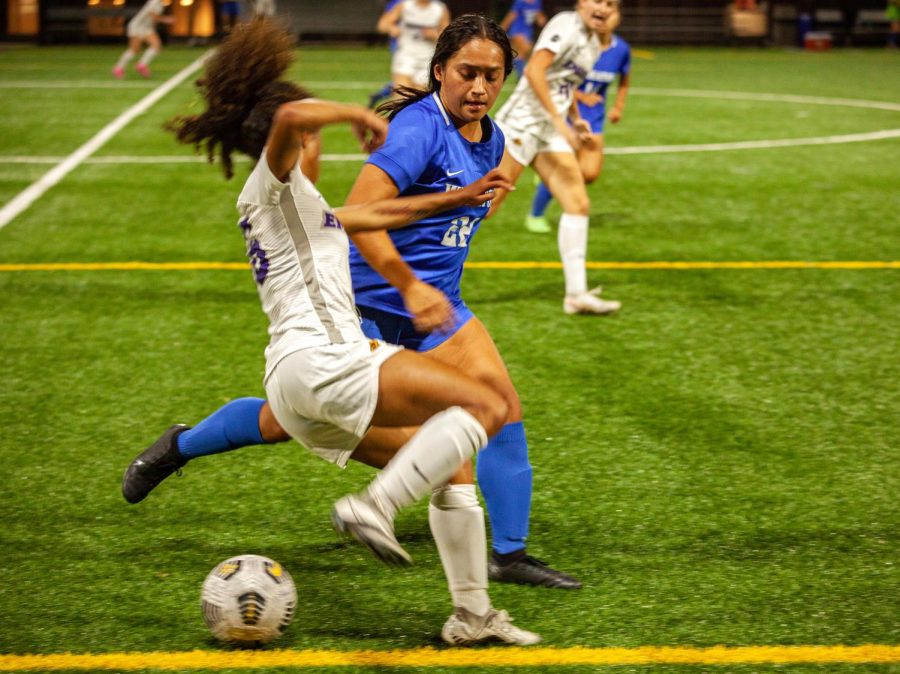 Emerson’s women’s soccer team topped Wheaton College 2-1 in a Wednesday night matchup at Roch Field, bringing the team’s record on the season to 6-4.

The Lions were coming off a 2-1 loss to Babson College, and their plan entering the match against Wheaton was simple—the team wanted to stick to their strong suits.

Wednesday’s game was especially meaningful for the Lions because their families were allowed entrance into Rotch Field for the first time this season. The team was motivated to put forth a great game and a win for the home crowd of friends and family.

“We need to play our style of soccer possession, attacking style, and just play our game,” head coach David Suvak said in a postgame interview.

The Lions fell behind halfway through the first half when Wheaton College forward Lily Brown soared the ball through the defense to the back of the net in the 21st minute. Despite the early deficit, Emerson dominated possession time and controlled the pace of the game, tallying 12 shots to Wheaton’s five shots by the end of the game.

The first half consisted of the Lions trying to find opportunities to score. They were in control of the game, defending the ball well, and trying to create offensive chances. At halftime, not many changes needed to be made, Suvak said.

“We really didn’t make any adjustments,” Suvak said. “We started with a plan of what we are trying to accomplish out there, and I only asked them to create more shooting opportunities and that is what they did.”

Going into the second half, the team was in high spirits––they were happy with the way they maintained possession in the first half.

“We had motivation and knew that we could dominate,” sophomore forward Simone Barrigan-Shaw said about going into the second half. “We just needed that extra push.”

That extra push would come early in the second half where Senior forward Grace Cosgrove would connect with Barrigan-Shaw, who would find the back of the net to tie the game 1-1 in the 50th minute.

Emerson continued to maintain control of the game throughout the second half, keeping to the plan of playing their game which ultimately led to the game-winning goal in the 69th minute.

First-year forward Alianna West-Rodrigues connected on a crossing pass from forward Gina Lukoskie and sailed one to the back of the net to take the lead the Lions would never relinquish.

“I’m super excited,” West-Rodrigues said after the game. “My family is here from Hawaii so they came a long way to watch me and it’s super exciting to be able to score and have them watch in person. This team is a family and we have created such a great bond with each other, and scoring the winning goal, I did it for them, not just me or my family, and it just meant a lot to me.”

Many players’ family members crowded the sidelines for the first time since 2019. Before tonight’s game, many dedicated family members would stand outside the fence at Rotch Field to catch a glimpse of the game.

One parent, Michael, who declined to provide his last name, expressed how he did not miss a home game all year as he would stand outside the fence at Rotch Field. He was excited to be able to get a better view of the game now that families are allowed entrance.

“It was hard to watch,” Michael said. “Especially with old eyes through the fence, but I’d come regardless. That’s the job of a parent.”

The Lions next take the field on Saturday, Oct. 16 for family weekend against Massachusetts Institute of Technology.