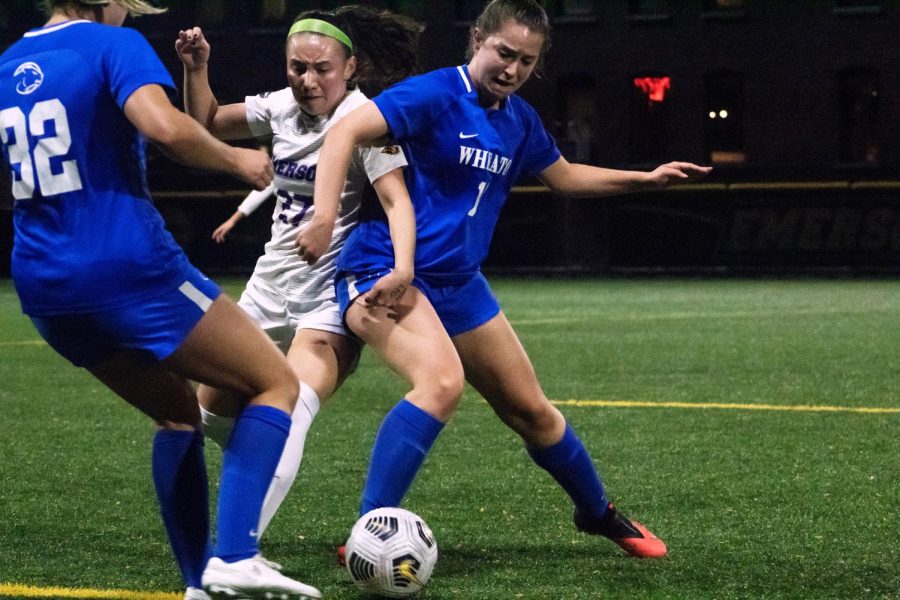 Madeline Khaw fought for the ball during the Nov. 2 game.

The women’s soccer team’s season came to a crushing close with a 1-0 loss to Wheaton College Lyons in the New England Women’s and Men’s Athletic Conference Quarterfinals.

The Lions capped off the regular season with a four game winning streak that propelled them to the number two seed in the NEWMAC playoffs. In the first round, the scorching hot Lions would be paired up with Wheaton, a team they beat 2-1 just weeks before.

Head coach David Suvak said they took the previous match into account preparing for the playoffs, but were faced with a new challenge at game time.

“We looked at their players and we looked at what they were capable of doing,” Suvak said. “They changed their formation tonight and we had to deal with a new formation, but I felt comfortable sticking with our game plan.”

After defeating Wheaton earlier in the season, it might have been easy to assume this game would be a breeze for the Lions but the coaches and players knew otherwise.

“Our coaches were cautious,” first-year goalkeeper Amara Schaub said after the game. “They prepared us for this game and we knew that it wasn’t just going to be an easy game.”

Wheaton entered the match having lost four of their last five matches, and tying the other. All this negativity would be put aside at kickoff as the Lyons looked aggressive early in the match. Within the first 15 seconds, Wheaton had already taken their first shot. Suvak said that he felt his team’s defense handled the offense well.

“We dealt with some initial pressure right at the very beginning of the half and we dealt with that pretty well,” Suvak said.

The two teams possessed the ball evenly through the first half of the match, with the ball frequently being exchanged in the midfield. When the Lions had the ball, they typically played down the right wing and crossed into the middle.

Emerson didn’t take their first shot of the game until 10 minutes of play had passed.

After exchanging chances to score, Wheaton forward McKenzie Paulo took a long shot and found the bottom left corner of the goal––scoring in the 26th minute.

In the Lions’ last match against Wheaton, they found themselves in a similar situation, down 1-0 at halftime. Suvak said he had an identical mid-game speech.

The start of the second half showed the Lions weren’t going to go down without a fight after taking two shots on goal within the first three minutes. The Lions had a chance to equalize in the 65th minute when sophomore midfielder Simone Barragan-Shaw was one-on-one with the keeper, but her shot missed wide right.

Wheaton would have an opportunity to score themselves even with the Lions strong offensive pressure. Schaub made a crucial save just barely getting a leg on the ball to send it out of play and keeping the Lions within striking distance.

In the 81st minute, Emerson found themselves in another one-on-one with the keeper, this time with the ball at the feet of first-year midfielder Madeline Khaw. She would try to put the ball over the head of the Wheaton keeper, but miss high.

In the final five minutes of the game, Emerson was awarded a corner kick. After Khaw swung the ball into the box, it would be put into the back of the net off the head of first-year defender Yoshiko Slater. The goal would then get taken away after a foul was called on Slater for knocking over the goalkeeper. The home crowd quickly became enraged and the Lions felt stripped of an equalizer.

“We should have been tied but the ref was, no offense, but she was ass,” Schaub said.

The Lions continued to press on until the very last minute, and with 10 seconds left, they took their last shot of the season, which just went wide left of the goal. When the final whistle sounded, it was lights out for Emerson.

“We didn’t stop,” Schaub said. “We did everything we could and we finished the season strong. We have amazing team chemistry, worked well together, and we’ve beat the team before, just unfortunate with the outcome.”

The disappointment was clear from both the Emerson fans in attendance and the players on the field after most felt they were robbed at a chance for overtime. Suvak said the call is a tough pill to swallow.

“It’s a hard one for me to digest,” Suvak said. “The sideline official called it and he is [about] 45 yards away. I would have appreciated that the center ref made the call and not the side. But the game’s over. We lost the game and the call is what it is.”

Suvak said the team, which has just two seniors on the roster, has an ample amount of potential to grow and perform in 2022.

“I am already looking forward to next season,” Suvak said. “I’m happy for the players that they get to play a competitive season and the joy that I felt around this team was amazing. They’re just very talented in the way they play the game. The style, the play, the possession, there’s so much to their game.”

With 17 first-years and sophomores on the team, the core of this era of women’s soccer is going to stick around for a couple more years. Schaub said she can’t wait to do it all over again in the 2022 season.

“I’m always just trying to have a positive mindset, ” Schaub said. “I look forward to winning next season and I think we’re gonna do amazing next season. As I mentioned earlier, we have amazing team chemistry and great coaches who are here to support us.”