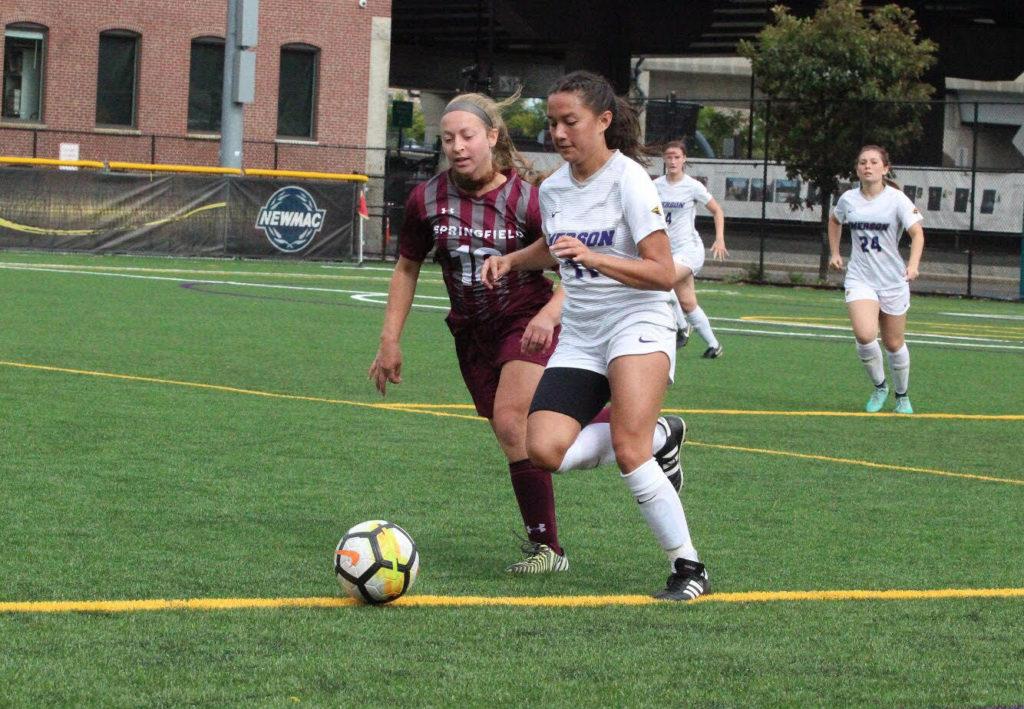 Veronica Alberts will be the only senior captain in the 2019 fall season. Photo by Anissa Gardizy / Beacon Staff

The college’s No. 3 seed women’s soccer team will face No. 2 seed Springfield College in the semifinals of the New England Women’s and Men’s Athletic Conference playoffs.

Springfield won the only regular-season matchup against Emerson with a 2-1 win at Rotch Field. Freshman midfielder Kayla McNamara scored her first collegiate goal for Emerson in the fourth minute, but the Pride rallied back with a 48th-minute goal from Wright and a 63rd-minute penalty kick goal from sophomore forward Sara Swetland.

Head coach David Suvak said he thought the game belonged to either team.

“We did give them a very good game in the first match, and the difference was a [penalty kick] late in the game,” Suvak said. “I personally believe that game could have gone either way that day, and it just happened to go their way.”

Emerson and Springfield faced off against each other in the 2016 NEWMAC quarterfinals, and the Pride won 1-0. Then-senior Elizabeth Monsen won the game for Springfield with a penalty kick in the third minute.

Suvak said he believes the 2016 loss will motivate the team in the upcoming semifinal.

“That was a tough [penalty kick] call against us, and I think we performed well in that match in particular—we just didn’t come out with the win,” Suvak said. “I’m anticipating that some of the seniors on this year’s team can remember how well we played that day and will want a little bit of the redemption.”

Dale leads Springfield’s offense and ranks first in the NEWMAC in goals with 16 and points with 36. Dale will face off against Emerson’s freshman goalkeeper Megan Rose who ties for second in the NEWMAC in saves with 93.

“I think Springfield is a very well-coached team,” Suvak said. “[John Gibson] plays probably a similar style [to what] I will coach—possession-oriented, playmaking type of soccer where he’s going to be moving the ball around on the ground. He doesn’t play direct soccer. He has some talented kids on his team.”

The winner of the Emerson Springfield semifinal will go on to face the winner of the semifinal between No. 1 seed Massachusetts Institute of Technology and No. 4 seed United States Coast Guard Academy on Nov. 3 at 1 p.m. in the NEWMAC Championship game.