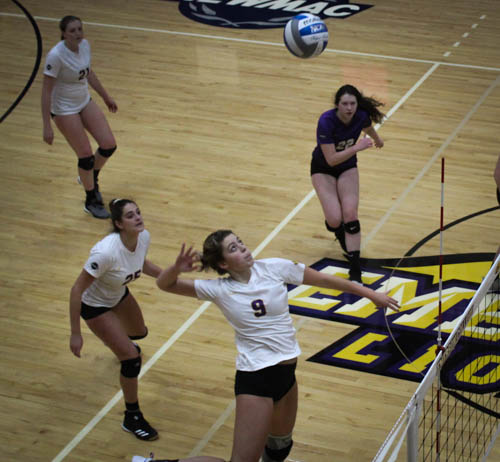 In the ceremony before the match, the Lions’ only senior, outside hitter Jessica Braunstein, received recognition for her athletic achievements while her teammates cheered her on.

“She’s like one of my closest friends that I’ve made since I’ve been here,” freshman middle blocker Logan Steenbergen said in a post-game interview. “It’s gonna be weird to be back next year and not have her here because she’s a very reassuring presence.”

Brandeis came into the match with a 4-17 record but went toe-to-toe with the 16-6 Lions. After falling behind by four in the first set, Brandeis scored four straight points to tie the game at 19. The Lions rallied and won the set 25-21. Brandeis recorded eight attacking errors, while the Lions totaled three.

The Judges jumped out to an early lead in the second set, but a six-point run by the Lions helped them gain control and win the set 25-18. Junior outside hitter Grace Tepper totaled nine kills throughout the first two sets.

Halfway through the third set, Brandeis led 15-9. After the Lions regrouped late in the set to make the score 24-20, Brandeis setter Talia Freund scored her first kill of the game and ended the chances of a sweep.

The Lions committed four more errors than the Judges in the third set.

“I think that we recognized that how we played in the third set was unacceptable,” Steenbergen said.

“That’s why we like to play Brandeis,” Read said. “They are a very strong team and the last couple of years, they beat us 3-0 and 3-0. It’s a good competitive game for us to help prepare for conference [games].”

The Lions will play on the road against the Massachusetts Institute of Technology on Oct. 29 at 7 p.m.