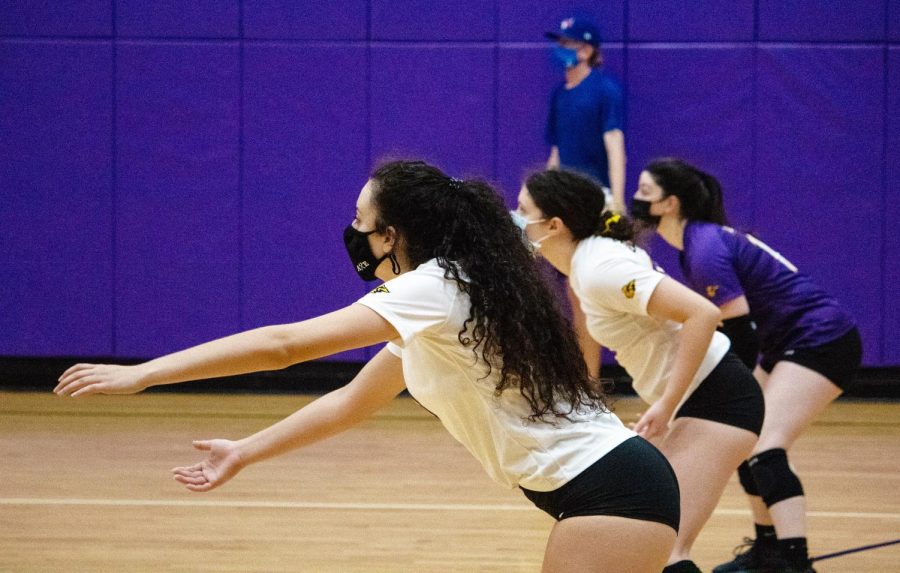 Emerson College players in the game.

The women’s volleyball team defeated Wellesley College on Tuesday night in the Bobbi Brown and Steven Plofker Gym–extending their win streak to a fourth game, and bringing their record on the season to 11-3.

Wellesley entered the game 2-6 on the season while Emerson was coming off their massive 3-0 win against Springfield College Saturday. The Lions wanted to keep the momentum they picked up heading into Tuesday, and head coach Ben Read said the result proved their potential.

“Springfield over the weekend felt really good,” Read said in a post-game interview. “It’s just a bit of a confidence builder knowing that we can compete with the very best in New England.”

“We went into it with preparation,” Kay said after the game. “We watched a lot of video, coach gave us a lot of insight and he just mostly told us to go out there and have fun because that’s when we play our best.”

The first set started with an attack error from the Blue, which allowed the Lions to open up the scoring and strike first. The Lions would continue to find success throughout the set—scoring 17 out of the next 22 plays. That stretch propelled them to a 13 point lead of 19-6

Read praised his team’s ability to build early leads as a result of their strong serving ability.

“We do serve really tough and we’ve gotten some really good teams in trouble there,” he said.

Emerson dominated the first set 25-13, ending on a kill from first-year outside hitter Parker Cummings. Despite the performance displayed at the beginning of the game, Wellesley rallied back for a competitive second set.

The Blue scored seven of the first 10 points in the second set, ripping off four consecutive points before the Lions began a streak of their own, winning the next six points, bringing the score to 11-9.

The teams traded points back and forth until the match was tied up at 17. First-year middle blocker Brooke Maynez broke up the deadlock with a kill when the score was tied at 20. The Lions would take the second set 25-22 on a kill from senior defensive specialist Lauren Quan assisted by Cummings.

The Lions now led the Blue two sets to none, which Kay said led to the team taking their foot off the gas pedal.

“We came out really strong and we kind of let up a little bit,” she said. “Just based on the level of play and we kind of thought, ‘Oh, we got this you know, we can maybe take a break’ but you never take a break in volleyball—you have to just keep playing.”

The third set would continue the competitive play between both sides. Both teams were making adjustments to try and gain an advantage, though Read said some of the changes to the Lions’ game plan didn’t go as planned.

“[Wellesley] made their adjustments and they passed better, their offense got better in that third set,” he said. “Brooke was doing a good job blocking and we switched Parker over there. In practice, she’s done a good job blocking and we wanted to mix it up. I personally didn’t think we were doing as well as we should have, and I thought we could do better, so sometimes you make a change, it works in your favor, sometimes it doesn’t.”

The Blue came out strong again in the third set—opening up a 10-4 lead. The Lions were able to answer with four straight points—forcing a Wellesley timeout. The intensity continued to build and the match would be tied at 17 again. Each point scored by one team was answered by the other, leading to the game being knotted up at 23.

The Lions then took a timeout to assess their play in the set. Read said the move was intended to remind the team of their strengths.

“Just trust ourselves right now,” Read said. “We know what they’re gonna do, we just have to be stocked on defense so we can go ahead and run down their shots, trust our block and put some service pressure on.”

The Lions would score on the next play, putting them just one point away from putting the match to bed. The Blue then ripped off three straight points to win the set 26-24.

Losing a close, competitive set could have demoralized the team, but Kay said it just served to build the team’s confidence.

“We were just trying to kind of find the secret formula because we had lost it for a minute,” Kay said. “We talked about the fact that we could do it, not ever getting down on ourselves, and knowing that we could play our game.”

The Lions showed their superiority in the fourth set after taking an early eight-point lead. Read said he reverted back to what worked for his squad in the first set after they were topped in the third.

“We changed our lineup slightly to try to get ahead of some things that we thought they were doing and it didn’t work out so we just went back to what was working on the [first] set,” Read said.

The Lions hadn’t shown such dominance since the first set and similarly, their serving pressure was a strong contributor. Junior defensive specialist Andrea Mendez notched two aces and Davis would put the Lions on game point after her 5th ace of the game. Emerson won on an attack error from Wellesley, 25-16.

After the win, the team was ranked 10th in the region by the New England Women’s Volleyball Association.

The team is set to take on Coast Guard at 1 p.m Saturday on their court—a matchup Kay said the team is looking forward to.

“Coast Guard is a big game and we’re all really excited for it,” Kay said. “They’re a really good team, and it’s away so we’re looking forward to that bus ride. We’re just looking to do what we did tonight, even if we get down on ourselves to come back and rally together.”