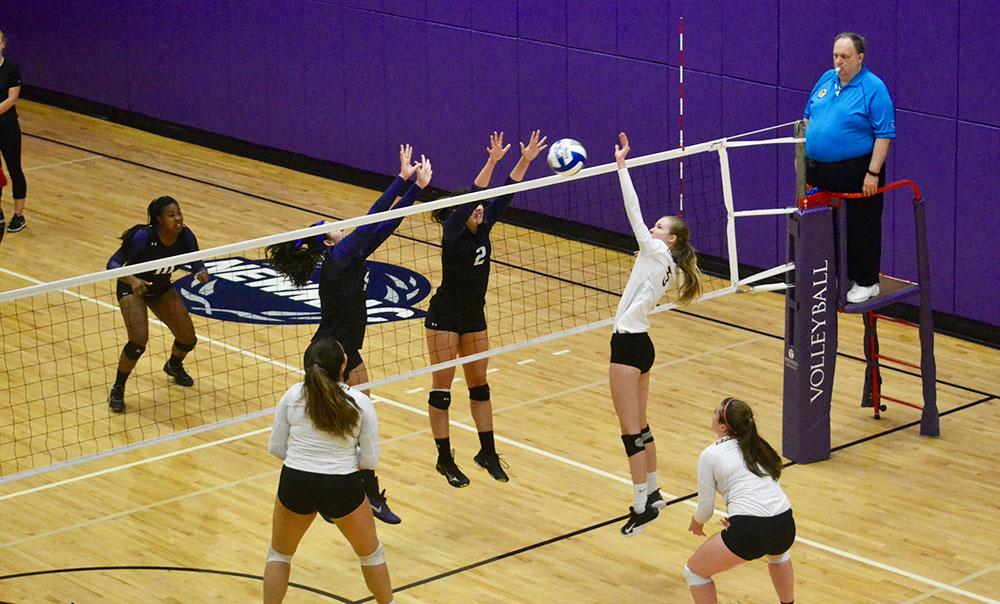 Despite an inconsistent season and a tough four-game losing streak, things may finally be coming together for Emerson’s women’s volleyball team.

Following a rough 4-7 start, the Lions adopted a new mentality and turned it around in the last eight games. Now with a 10-12 record, players and coaches alike are feeling optimistic about the final five matches of the season.

Head coach Ben Read praised the spirit and work ethic of his players. He said that mentality started during the losing streak.

“I think it does put us down a little bit when you’re constantly losing, but they never stop trying,” Read said. “They never stop fighting, and they want to come to practice and work even harder after those losses, but they are going in every day and really working on getting better.”

Junior middle blocker Kelley Guerra leads the squad in passing percentage at .230. Guerra points to a team meeting several weeks back as the key point in turning things around.

“We had a big talk as a team about little things mentally that we can change,” Guerra said. “I think those have helped a lot but it came down to us approaching practice differently.”

Read is lightening expectations for the final few weeks as the team faces top conference competition. He said he is impressed with the fight and determination of his players, and looks forward to seeing how this momentum translates into next year.

“We do have one senior on the team, Halley Dewey, who will definitely be missed, but it’s nice knowing we only have one senior,” Read said. “So, this team coming back, with the work ethic they’re putting in right now, it’s kind of exciting to see where we could finish up at the end of the year and build on for next year.”

Conference rival WPI has given the Lions trouble in years past. Emerson did not beat the Engineers or succeed in taking them to a fifth set from 2014 to 2016. The Lions broke the losing streak on Sept. 30 when Emerson took down WPI in three sets.

Read pointed to that match as the biggest win of the year.

“When we played them, you [could] just feel the energy on the court,” Read said. “On our side there was fight, support for each other, and we played really well. It was probably our best match as a team, and to get it done in three sets was the icing on the cake, but a little bit of a relief too.”

Junior libero Fara Cohen had a match-high 25 digs and has led the Lions all season. She credits her teammates’ will to win that day.

“I think that win was super satisfying for us as a team because we played really clean volleyball and so did WPI, so it wasn’t just a random day where they played down and we played up,” Cohen said. “It was just a good hard fought match, and we had been working towards that kind of a win all season.”

It was the Lions’ second conference win of the year and their second win in a three-game streak.

No matter what team she was on, captain Fara Cohen spent the majority of her career as an outside hitter. But this season, with Emerson rostering less players, there was a need for a new libero on the court, and Cohen’s name was called.

Cohen sits ninth in the NEWMAC in digs, and has been vital in the team’s efforts this year. Cohen said she does not view the stats and success as an individual achievement, but rather a product of the Lions’ ability to come together as one over the course of the season.

“It’s a nice statistic to have personally, but I think a lot of it is attributed to our team’s ability to put up a great block and the way my teammates set up their defense,” she said.

The Lions’ leader in kills, Grace Tepper, recently suffered a sprained ankle and sat out four matches. Read said not having Tepper on the court affected the team’s chemistry, but he is confident in his players ability to step up when an opportunity presents itself.

Guerra echoed her coach’s confidence in the squad, but noted the impact the injury had on each practice and match.

“Because [the team is] so small, it’s a huge impact, because losing a player means our practices are completely different when we have seven people on the court versus eight people,” Guerra said.

Tepper returned to the court for Emerson’s match against Rivier on Tuesday.

The Lions have five games left in their season, including two NEWMAC matches. Their next match is home on Saturday against Maine-Presque Isle.