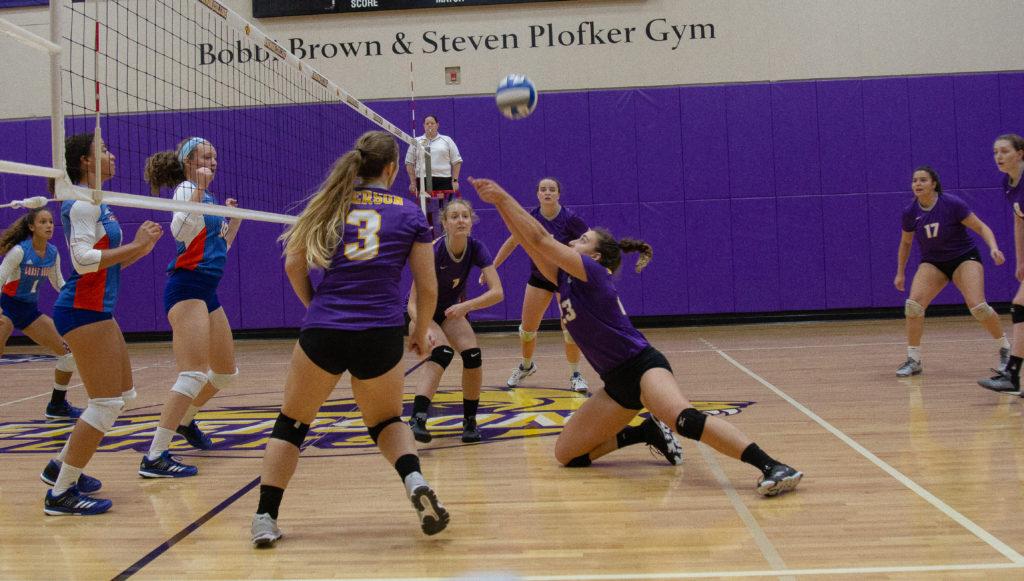 Fara Cohen (No. 23, center) lays out for the ball in Emerson's 3-1 loss to Coast Guard. Photo: Anissa Gardizy/Beacon Correspondent.

The first set began with a back-and-forth contest between the Lions and the Bears, until the game-ending injury of outside-hitter Carolyn Vaimoso.

Vaimoso injured her leg after colliding with a teammate while both attempted to recover a ball in their blocks. She then struck the base of the net and had to be helped off of the court to the locker room.

Despite this, the Lions rallied back with a six-point run to get the set back in their favor.

“What’s been nice about our team is, more so than last year, we have a little bit of depth in position, so that leads to a little more competition in practices,” Read said. “Everyone in our team seems to be pretty prepared to step into a role if we need it…and I thought they showed that.”

The first set went in the Bears’ favor by a score of 25-23. Set two also went in the favor of the Bears, but four three-point runs granted the Lions a decisive 25-16 set win in the third.

Senior middle-blocker Kelly Guerra mentioned how the team deals with the nervousness of playing in such a competitive conference.

“Really the only thing we can say is, ‘don’t let up, don’t let them roll over us, and just keep on pushing, and know that we can compete with the team that day because we are at the same level, or even better when we’re all gelling together,’” Guerra said. “That’s the type of attitude we usually go through.”

In the fourth set, Guerra booked two kills within two plays of the ball. She also ended a back-and-forth play by arching the ball over two Coast Guard blockers.

Despite Emerson’s comeback, the set went in favor of the Bears and the match ended with a 3-1 win for Coast Guard.

One positive Read took away from the game is the proven diversity of his players on the court.

“We had different people step up into different roles,” Read said. “We had people on the court in positions they weren’t accustomed, we had a few injuries, and I thought people stepped up and did a good job.”

The Lions are now 0-2 in the New England Women’s and Men’s Athletic Conference and will faceoff next at Babson College on Tuesday, Sept. 18 at 7 p.m.