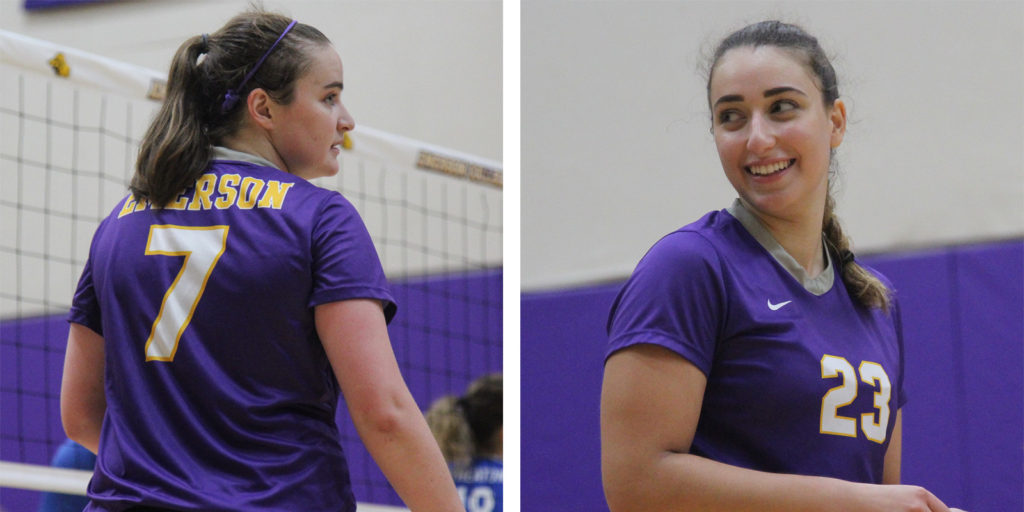 Seniors Moira Brennan and Fara Cohen both hit milestones in their women’s volleyball careers this past week, joining the 2,500 assists and 1,000 digs club, respectively.

Brennan, the team’s star setter, became the first member of this season’s team to earn her 2,500th assist during a conference game against Mount Holyoke College.

The Bobbi Brown and Steven Plofker Gymnasium Skybox will permanently display these records on banners.

Brennan attributed her achievement to the team and their help in getting her assists.

“I couldn’t have done it without the team,” Brennan said. “All of the digs and kills allows me to get the assists.”

Cohen, an outside hitter and defensive specialist, joined the 1,000 digs club after attaining her 1,011th dig in the same conference game win against Mount Holyoke. She ranks fifth for most digs in Emerson women’s volleyball history.

“Volleyball is the epitome of a team sport,” Cohen said. “[The 1,000 digs is] a great individual achievement, but it’s also a tribute to all of the players we’ve played with.”

“Swimming was very individual, and once I experienced being on a team, I just knew that was where I was going to thrive,” Cohen said.

“Our team has never made the playoffs, so we just want to push as hard as we can to make the best run that we can,” Cohen said. “We’re trying to push the limits.”

Cohen has played basketball for four years and this is her fourth season playing for Emerson.

Head Coach Ben Read attributes Brennan and Cohen’s achievements to them performing to their best ability in their given positions.

“[Cohen] is doing her job, and she’s getting the digs she needs to help our team be successful,” Read said. “[Brennan], as our primary setter for the last three and a half seasons, hit a number that you should be able to get if you are the primary setter.”

Brennan said she sees the team succeeding for years to come.

“This is the best we’ve felt about our team in a really long time,” Brennan said. “Even after [the three seniors] leave, the team has a great core group that they can build upon.”

The Lions play their next conference home game on Friday, Oct. 5 at 6 p.m. against Wentworth Institute of Technology.