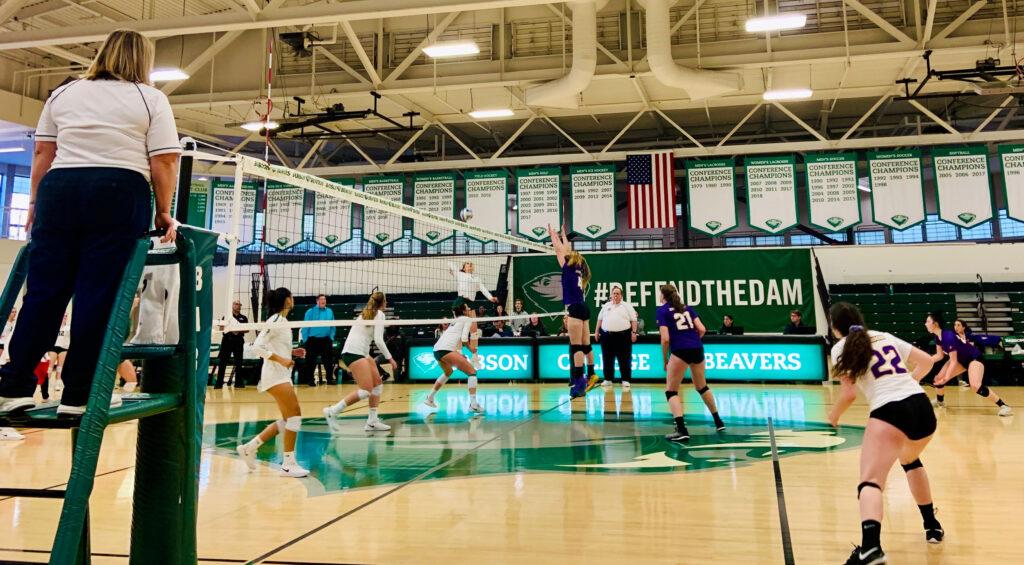 The women’s volleyball team lost to the reigning conference champion Babson College 3-0 in the NEWMAC Championship game on Saturday afternoon. This is the second season in a row the Babson Beavers won the title and the sixth consecutive year they advanced to the NCAA tournament.

The Lions entered the championship game after comeback victories against the Massachusetts Institute of Technology in the conference quarterfinals and Wellesley College in the semifinals.

With the loss, the Lions finished their season 6-4 in the conference and 20-8 overall. Before the season, the New England Women’s and Men’s Athletic Conference coaches poll predicted the Lions to finish eighth overall out of eleven.

The Beavers entered the game with a 31-1 overall record and ranked 18th in the NCAA Division III. The Beavers’ lone loss came against the Lions on Sept. 24 in a decisive 3-1 victory.

The Beavers carried their momentum over and dominated in the second set to take the commanding 25-10 set win. The Lions only recorded five kills and committed five errors—two more than the first set and averaged a zero attacking percentage.

The Lions took an early 1-0 lead in the third set because of an attacking error by Babson, but the Beavers regained the lead and continued their dominance to win the set 25-14.

“It wasn’t our best game and I think the team was exhausted,” head coach Ben Read said in a post-game interview. “It was a very long week and Babson was fresh coming off a bye week. There was a reason why Babson is top of the league and nationally ranked. They are very good.”

Senior Jessica Braunstein played in all three sets for the Lions and will be the only graduating senior on the team.

“She’s been here all four years and she’s seen an up and down with the program,” Read said. “She’s been here for a culture change and she’s stuck it out. She’s a grinder and I wish she didn’t get injured this season and would have contributed more, but I’m happy we made it to the championship for her.”

Braunstein tallied two service errors in the game but kept a smile on her face when on the court.

“It was incredible that we made it this far,” Braunstein said in a post-game interview. “It’s been a very great team and an amazing season and the fact that we made it was amazing. To be a part of it as a senior has been amazing. There was no way to predict this would happen but day one we knew we had something special.”