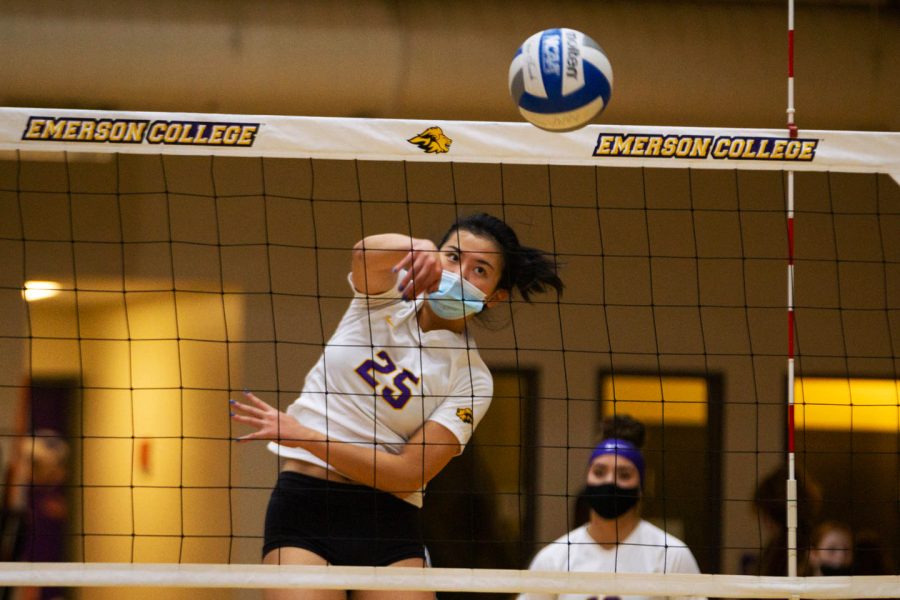 Isabella Chu recorded 11 kills in the loss to MIT on Sept. 13.

The women’s volleyball team lost 3-1 to Springfield College Tuesday night in the first round of the New England Women’s and Men’s Athletic Conference playoffs, ending its season 17-8.

The Springfield Pride entered the game 21-6 as the fifth seed in the NEWMAC standings, with one of its few losses being Emerson’s sweep on Sept. 25.

The Lions were ranked as the number four seed in the standings, awarding them the chance to host the match at the Bobbi Brown and Steven Plofker Gym, where Emerson typically dominates. The Lions entered Tuesday with a record of 11-2 at home.

“Being in a place we know, where we practice every day, it’s just comfortable,” first-year pin hitter Isabella Chu said. “Everybody comes. It’s very fun.”

The game got off to a rocky start for the Lions, with Springfield middle hitters Camryn Bancroft and Kylie Wixted dominating on cross-shot slides. The Pride’s pin hitter Jamie Albrecht teamed up with Wixted on a double block that gave the Lions’ pin hitters trouble throughout the night.

The Lions couldn’t seem to develop a rhythm, struggling to stop Springfield runs and racking up over 10 errors by the end of the first game. The team that started Tuesday night’s match looked entirely different from the one who swept Springfield in September.

“Last time we played Springfield, we played error-free volleyball,” Read said in a post-game interview. “We knew they could come out and fight and they definitely did in that first set—we didn’t.”

The first error-plagued set would see the Lions lose in an uncharacteristic 25-10, but the Lions came back fighting in the second set.

“We just stopped overthinking it and started having a dance party,” first-year pin hitter Amelia Combs said. “Just having fun, playing with our heart on the court rather than our heads.”

Set two brought small lineup changes, better defense, and more consistent swinging on the Lions’ side of the court. Emerson junior middle hitter Logan Steenbergen started running slides to compete with Bancroft’s, and the Lions steadily closed the block. The team improved coverage and upped hitting consistency with first-year outside hitter Parker Cummings accumulating four of her 10 kills in the second game.

The teams rapidly exchanged points, with Springfield maintaining a 2-to-3 point lead for most of the game. The Lions fell just short, losing 25-22 after a series of errors.

Despite being down 2-0 on the day, Emerson entered the third set ready to compete, which carried them to their first—and only—win of the night.

The Lions capitalized on a first-point error from Springfield and didn’t give up the lead for the rest of the game. A series of Springfield errors and two blocks by middle Logan Steenbergen put the Lions up 10-2—a deficit Springfield never overcame.

Energy surged through the student section and throughout the bench, oozing into players’ performances. The Bobbi Brown and Steven Plofker Gym started to feel like the Lions’ home court again. The Lions finished game three 25-17 with explosive kills from Steenbergen and Combs.

Emerson carried its energy into the fourth game, prolonging rallies and making plays. The Lions took advantage of an unclosed block on the outside, racking up several kills via tool. The team also continued to improve its defense, digging the troublesome hard cross shots Springfield had utilized since game one.

But at the end of the day, hard-fought points were negated with attacking and service errors. After a series of kills from Pride middle and pin hitters, the Lions came up short. The set ended 25-22 after a serve from Steenbergen didn’t make it over the net, concluding the team’s 2021 season.

Though the season ended sooner than he’d hoped, Read expressed gratitude for his players’ growth and excitement about their comeback performance after a year of hiatus.

“To finish fourth in conference and host a playoff game in the NEWMAC for the first time ever is huge,” Read said. “We did that with a young team.”

He also said he looked forward to continued improvement next season, adding that he hoped to play more competitively with ranked teams like Bowdoin College and Amherst College. Wins against ranked teams would alleviate the pressure of winning the conference to obtain a national tournament bid.

After reminiscing on the end of a memorable season, Combs also expressed excitement about continued improvement in upcoming years. She noted the team’s cohesion as an asset for seasons to come.

Chu seconded Combs’ opinion, saying the Lions benefitted from camaraderie and closeness throughout the season.

Read said this team’s positivity makes it unique—and will give it an edge for seasons to come.

For now, though, the Lions will look towards 2022, hoping to capitalize on another chance to conquer the extremely competitive NEWMAC division.

“This team has shown that they’re one of the best teams in the region and they can compete with anyone,” Read said. “I’m proud of all the changes they made and I’m proud of our two seniors that lead by example on and off the court.”