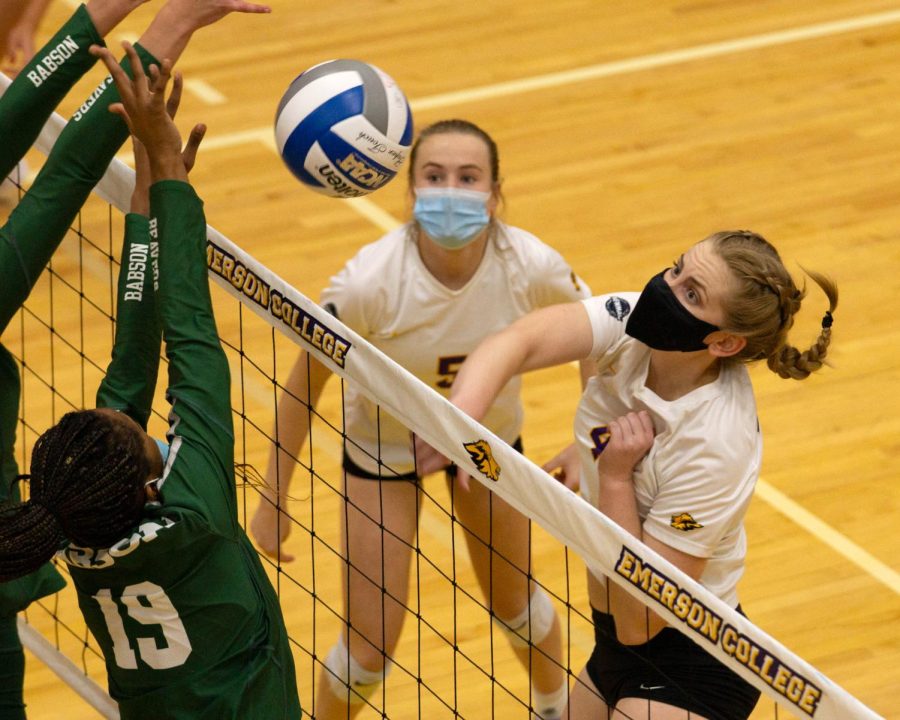 The Beavers entered the match as a nationally ranked team with a record of 13-1, while the Lions were coming off a loss to Coast Guard. Despite the loss, the team had proved unbeatable at home, with a 6-0 record on their home floor in the Bobbi Brown and Steven Plofker Gym. The atmosphere in the stands helped keep the energy high for the Lions.

“It was so fun,” first-year pin hitter Amelia Combs said. “The crowd got into it, we got into it, and [the crowd] helped us stay positive even if we were struggling.”

Despite the team’s history, the past was put behind them after a year without volleyball.

“I don’t think we even looked at it because it’s been a couple of years,” head coach Ben Read said after the game. “Half our starters didn’t even play in that game and at the time I’m not even sure some of [the players] were considering Emerson College so it’s a very different team.”

While the Lions and Beavers rosters changed over the course of their extended offseason, the level of play from Babson has stayed constant. Combs said the team stepped up their preparation ahead of the matchup.

“[We] worked hard in practice and we watched video,” Combs said in a postgame interview. “I feel like we were very prepared and they’re a very consistent team so that’s what they show.

The Beavers showed their prowess when they quickly took the first two points in the first set. First-year middle blocker Brooke Maynez would score the first points of the day for the Lions on a kill.

The first set remained close and saw the Beavers and the Lions exchanging points, but Babson kept their lead despite Emerson’s best efforts. The Lions lost the first set 25-22 and faced a one-point deficit for the majority of the set. The deficit could be pinned on the tough refereeing against the Lions, though Read said it didn’t play a major role in the defeat.

“I do think that we were a little cleaner on our side and depending on the referee we might have got a couple of calls,” he said. “It might have made some of the sets a little closer, but it didn’t [have an] impact.”

The consistent Babson Beavers started the second set by securing the first three points. Maynez was once again responsible for the Lions’ first point of the set making the score 3-1. The Lions pulled within one point again at 5-4 but it didn’t get any easier for them as the Beavers continued to add on and went on a scoring spree eventually making the score 12-5. Read said the Beavers blocking ability gave them problems.

“The size of their block was one thing,” Read said. “[Babson] was a big team. We’ve seen some big teams, they’re right up there near the top.”

Emerson called a timeout and returned with a five-point streak of their own making the score 12-10. This would be the closest Emerson got to taking the lead for the rest of the second set. The Beavers jumped out to a 17-11 lead before the Lions would call their next timeout. After the timeout, Babson continued to score, eventually taking the second set 25-16.

Following a dominant second set from the Beavers, the Lions looked to change up their game plan. Read said the team had been doing it all game up to this point.

“We changed the lineup,” Read said. “[Isabella Chu] got to swing on the outside and we moved Parker [Cummings] on the right to switch things up. We switched our defense…but honestly, the service pressure helped us in [the third set].”

Babson would open up the third set with a 4-1 lead but the Lions answered back with four points, taking a 5-4 lead. Sophomore libero Caroline Davis scored two aces in this small streak, a part of her game that she said shined after the game.

Babson wasn’t going to let the Lions run away with the game though and after exchanging the lead twice, the Beavers called a timeout with the Lions up 9-8. Emerson followed this timeout by scoring six points in the next seven plays, making the score 10-17. Cummings, a first-year outside hitter, and Combs found a rhythm in the third set.

“I just found the open court and the sets were there and I hit it and it just worked out,” Combs said.

Despite three consecutive points from the Beavers, the Lions stayed positive on the court and answered back with four of their own. First-year outside hitter Chu also found success in the third set. She said that the setters were extremely helpful in creating chances.

“I was really connecting really well with the setters and everybody was really supportive on the floor,” Chu said after the game.

First-year setter Rachel Scott put up 11 assists in the third set and had 22 assists at the end of the match. The Beavers would attempt to crawl back into the match but the Lions finished out the third set on a kill from Junior middle blocker Logan Steenbergen. The Lions won set three 25-19.

Unfortunately for the Lions, this would be the only set they would be able to take.

The 4th set once again started with Babson taking the first point. The Beavers jumped out to a massive lead and the Lions looked completely overmatched. Babson had a double digit lead after going up 16-6 and never dropped below it. On game point, the Lions scored three consecutive points but it wasn’t enough—Babson took the 4th set and the match 25-13.

“They had a big block up there and we just needed to go faster on the pins,” Read said. “It was too little, too late, making the change for us.”

Moving forward from the tough loss against Babson, Combs said the team wants to take their positive mentality into their next match.

“Definitely the energy and just keep building on like what we’ve already improved on,” she said.

The women’s volleyball team’s next match will be on Oct. 8 at 7 p.m. against Wentworth College at home. Read said the non-conference game could help the team get back on track in the tough NEWMAC.

“There are multiple teams that have been nationally ranked [in NEWMAC],” Read said, “We’ve got a really good conference and we’re also really good we’re just coming up a little short against some teams so we’ll give ourselves a couple of days practice. We got some non-conference games coming up before we started back up.”