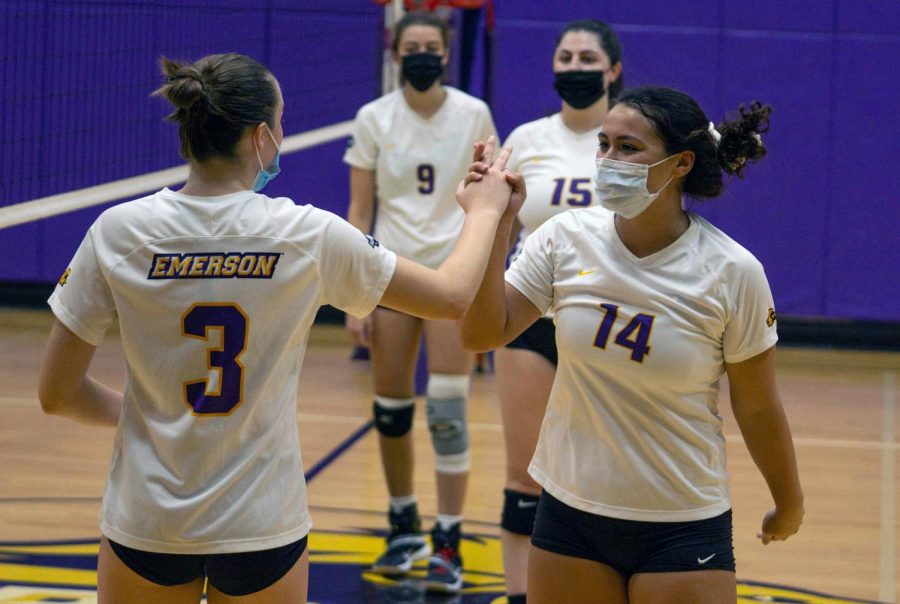 Following their first-round defeat in last year’s NEWMAC Championship, the Emerson women’s volleyball team is on a mission of redemption, aiming for accolades higher than ever before.

The Lions finished the 2021 regular season with a 17-8 record and are now three years removed from losing in the 2019 Championship game to Babson. The team knows its chances of success are highest when players’ morale and passion for the game is high too.

“Emerson volleyball is known for having fun,” senior blocker Jillian Kay said. “I think our fun translates to more intensity and that intensity then translates to wins. Something that I think we really need to bring back this year.”

For Head Coach Benjamin Read, winning comes from an optimistic attitude and preparedness.

“We want to have a positive mindset and be prepared,” he said. “We want to keep people motivated and to get comfortable being uncomfortable. There’s situations where we’re down a few points or we’re playing in a hostile environment. We just need to go ahead and be comfortable with that.”

However, the stakes are arguably higher this season as a tougher schedule—designed to push players to peak performance and give the squad a better chance to qualify for the NCAA postseason and the NEWMAC Championship Tournament—is implemented alongside Coach Read’s heightened attention to detail.

“We’re trying to tinker with small adjustments in our offense and our defense,” said Read. “We’re trying to be really nitpicky, but I think that’s what helps take us to the next level, any way we can earn an extra point or two.”

“Being really intentional with our play is something I think we can improve on and will become the secret formula to winning for us,” Kay added.

Along with tweaks to the tactics and a positive mindset, the Lions believe a core of talented players who know each other well and an already supportive, welcoming community will benefit them on their mission of winning it all.

“It’s always been team first,” said Steenbergen. “It’s been that way since I came in my freshman year. This is the most cohesive community of players I’ve ever been in.”

The Lions graduated two players last year and have eight seniors on the roster to start the season. The players feel that familiarity between teammates will be helpful in welcoming new team members and starting off the season on the right foot.

“It’s nice to have [returning players] back,” added Kay. “Our newer players coming in know that we do have a team already built. They’re really looking forward to contributing and building each other up. I think we do a really good job of making sure everyone’s always welcome and supported and I think that’s the key to our success.”

The team has high hopes for the season and expects to be among the very best in the NEWMAC. Coaches in the conference seem to agree, ranking the Lions as the sixth-best team in the NEWMAC in a preseason poll. However, the Lions believe they should rank higher.

“I don’t want to say I was offended by it, but I do think they’re selling us short,” Kay said. “I think Emerson volleyball is known to upset some teams. We’re going to be a powerhouse in the NEWMAC.”

Steenbergen put it much more simply.

“We ranked fourth in the conference last year,” they said. “I think we should be ranked higher.”

Whether or not they will finish in sixth or better remains to be seen. The Lions started their season off at 2-0 on Sunday, Sept. 4, but they have a long road ahead of them if they want to earn powerhouse status.