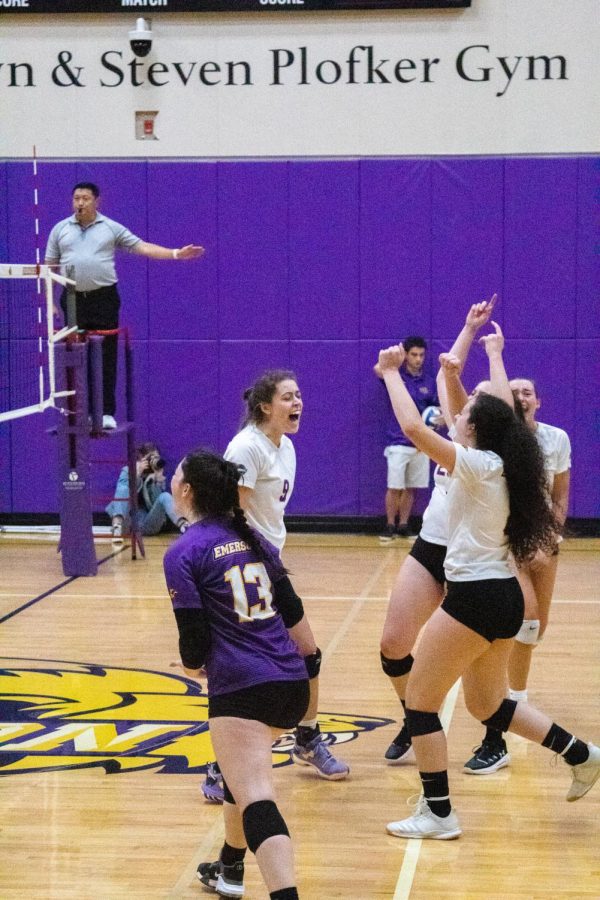 The win bumped the women's volleyball team's record to 14-3.

The Emerson women’s volleyball team beat the Brandeis University Judges 3-0 on Thursday thanks to the strength of a narrow victory in the third and final set of the match.

Nearly a year ago to the date, Brandeis served the Lions’ first loss of the 2021 season in a five-set reverse sweep.

The Lions started strong after sophomore outside hitter Amelia Combs scored the first kill for the team, assisted by senior setter Caroline Bond. The momentum continued for the Lions as they paced Brandeis all the way to a 25-16 win in the first set, capped off by an ace from senior defensive specialist Andrea Mendez.

In the second set, the Lions took full control, starting with a 4-0 run that gave them a lead they never lost. Despite a few excellent rallies where Brandeis seemed to block every spike Emerson threw its way—an effort led by Brandeis’ Sydney Bent, who collected two of the team’s seven blocks—the Lions managed to outperform Brandeis by shifting their strategy.

“We wanted to change where we were swinging or attacking,” said head coach Ben Read. “I think we did a great job of slowing [Bent] down and learning where to swing around the block.”

Sophomore outside hitter Parker Cummings, who finished with a team-high 14 kills and 15 points, added that subtle tweaks in communication were key to success in avoiding the stifling effect of Brandeis’ blocks.

“We had our back row defenders talking to us a lot more,” she said. “As hitters we decided to use those blocks for our own good, going either high or off their hands.”

After a 10-4 run to finish the second set, concluded with an attack error forced by first-year defensive specialist Alexandria Montenegro, the Lions broke before the start of the third set, which proved to be the most contested.

Entering the third set, the Lions were reminded of the same moment last year when Brandeis turned the game around. With their backs against the ropes again, the Judges weren’t going away too easily. Throughout the set, the lead changed hands 11 times and neither team led by more than three points.

Late in the third set, the Lions took a timeout with the score at 23-21 in favor of Brandeis. After trading points with the Judges back and forth, Emerson was struggling to find a rhythm. Brandeis was too easily finding their way through the wall of Lions players at the front.

“We shifted our block and our defense,” said Read. “[Brandeis] kind of adjusted what they were doing, so we tried to take that away from them.”

Cummings recalled the timeout as a mental breather, marking it as a moment for the team to refocus and prepare for the toughest part of the game.

“That timeout was just to remind us who we are and why we want to be playing volleyball,” added Cummings. “It got us hyped and excited to finish the game.”

The timeout proved to be a boon for the Lions, who immediately scored four straight points en route to victory, the last of which was a kill that glanced off Brandeis’ front blockers, delivered by sophomore outside hitter Isabella Chu.

It was a clutch finish for the Lions, who only narrowly avoided a fourth set. Read attributed the victory to his team’s mindset.

Although Read acknowledged a need for precision, the team played just two days later in a tri-match against Western New England University and the University of Southern Maine. The Lions didn’t drop a single set, improving their record to 5-0.

The team’s next challenge is its conference opener against NEWMAC rival MIT at the Bobbi Brown and Steven Plofker Gym on Tuesday night at 6 p.m.