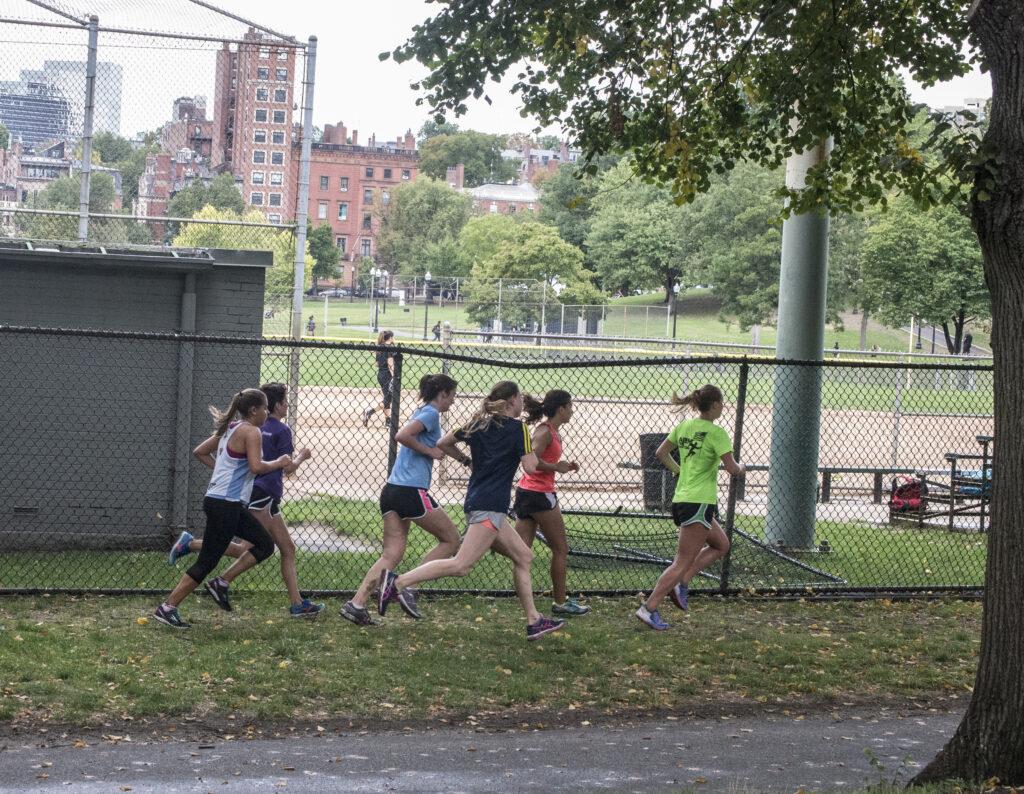 It’s a brisk Thursday afternoon on Boston Common, and Emerson cross country associate head coach Matt Sell is keeping his eye on runners’ backpacks and personal items on the baseball field bleachers. The women’s runners, meanwhile, are keeping their eyes on five New England Women’s and Men’s Athletic Conference opponents that veterans feel are within striking distance this season.

The Lions will meet each of those five teams—Smith College, Clark University, Springfield College, Mount Holyoke College, and Babson College—at the annual NEWMAC meet on Oct. 29. For now, they’re celebrating a strong finish at the Pop Crowell Invitational on Sept. 24 at Gordon College.

After finishing in fifth place at the annual gathering last fall, Emerson’s women’s team placed third this year. The average 5K time for the group, 21:03, was an upgrade over 21:24 a year ago.

“I think it was a combination of a good course on a really good day to run well and a good block of 10 or 12 quality workouts under our belt,” Furey said. “It’s a really good course to have a good time on, so that kind of motivates you too.”

An influx of new talent hasn’t hurt, either. Sophomore Natalie Vilotijevic, who Furey said joined the team after transferring to Emerson, finished 11th overall, clocking in at 19:50.

Vilotijevic and freshman Jeannette Mooney placed first and second for the Lions at their opening meet, the Bruce Kirsh Cross Country Cup on Sept. 17, finishing within seconds of each other. Senior captain Savannah Hubbard said the two have made an instant impact on the course.

“The two people who came in first and second for us, Natalie and Jeannette, they’ve been amazing,” Hubbard, a visual and media arts major, said. “Great teammates. They’re really working hard.”

In the past, Furey has stressed the importance of a tight pack, which refers to the proximity with which teammates finish the race. At the Pop Crowell Invitational, six of the top seven Lion runners finished within 1:05 of each other.

“We probably have seven or eight runners that are within about a minute or a little more, which is real good,” Furey said. “It’s probably one of the better packs we’ve had for a long time.”

Both the men’s and women’s teams will travel to St. Joseph’s College in Maine on Oct. 8 for their third meet.

Sports editor Hannah Miller, a runner on Emerson’s women’s cross-country team, did not edit or contribute to this article.