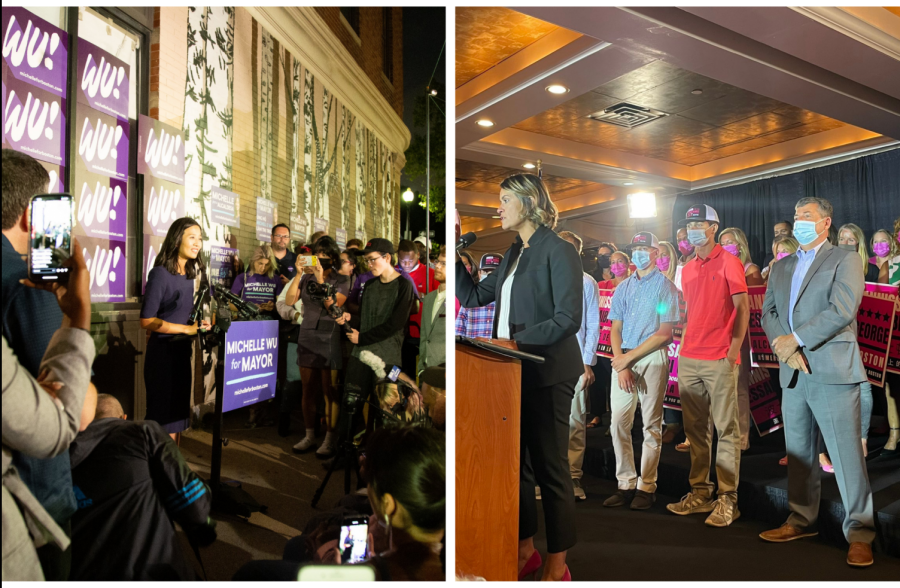 Michelle Wu (left) and Annissa Essaibi George (right) are set to compete for the city's top job this November.

City Councilors at Large Michelle Wu and Annissa Essaibi George are set to advance to the city’s general election for Mayor on Nov. 2 after finishing as the top two vote-getters in Tuesday’s preliminary election.

Either Wu or Essaibi George would be the city’s first full time female and person of color mayor. Essaibi George’s heritage is Tunisian and Polish, while Wu’s is Taiwanese. Both women are also mothers of school-aged children. November’s runoff election will be the first time since 1930 that neither candidate represents the city’s powerful Irish or Italian constituencies.

The similarities between the two women end there. Wu has led a progressive campaign and received an endorsement from Sen. Elizabeth Warren. Essaibi George, on the other hand, struck a more moderate tone and captured many of former Mayor Martin J. Walsh’s voters. Walsh took a job in the Biden administration as labor secretary, setting up Tuesday’s elections.

Wu pitched a plan to work towards a municipal Green New Deal, free public transportation, and reforming the Boston Police Department by working with the police union.

Essaibi George, on the other hand, has pledged to hire more police officers while improving accountability, transparency, and bias training, as well as replacing city vehicles with electric ones, and creating more accessible mental health resources for students.

Vote totals in the elections were delayed for hours as officials painstakingly combed through ballots.

Bates could not be reached for comment on this article.

Flaherty, who leads with 15 percent of the votes, holds a slim majority over his competitors. Mejia is in a close second with 14.1 percent, Louijeune in third with 12.2 percent, Murphy in fourth with 8.3 percent, Monteiro in fifth with 6.9 percent, Halbert in sixth with 6.2 percent, Garrison in seventh with 6.1 percent, and Nee-Walsh in eighth with 5.5 percent of the total votes.