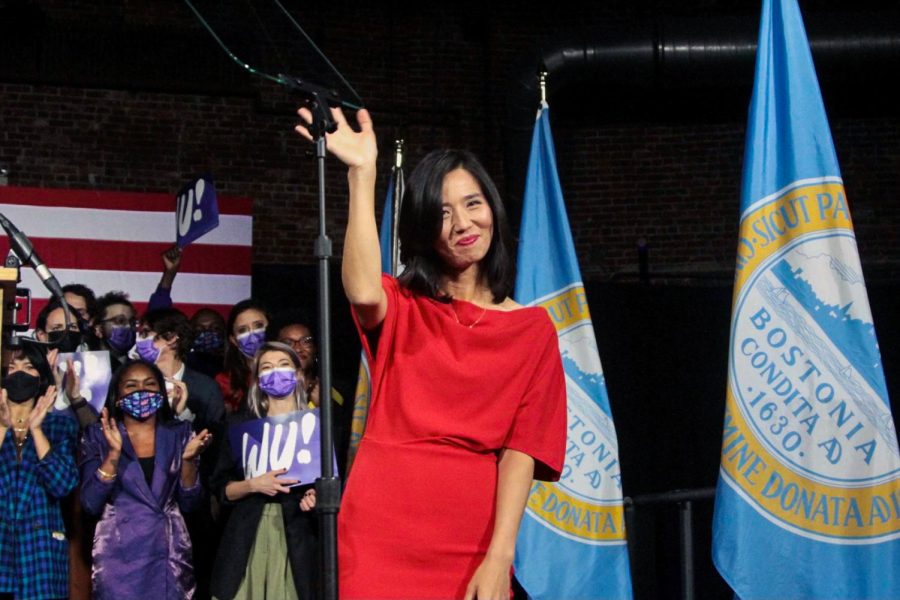 Michelle Wu was sworn in as mayor Tuesday, ushering in a new era for the city of Boston as the former city councilor became the city’s first woman and person of color elected to serve in the corner office.

“Boston was founded on a revolutionary promise that things don’t have to be as they always were,” she said at her swearing-in ceremony.

Voters confirmed Wu, a former city councilor, to the mayoralty on Nov. 2, the culmination of a historic election cycle that boiled down to two women of color. Before this year, the mayor’s office had been exclusively occupied by white men.

“When we make City Hall more accessible, we are all raised up,” Wu said.

“I’m confident that you will lead our city with integrity and that you will center equity,” Janey told Wu at the start of the ceremony.

Before her election, Wu served for eight years as an at-large councilor, including a stint as council president from 2016 to 2018. As the city’s first Asian-American councilor, she said her election to the mayor’s office represented a triumph for second-generation immigrants like her.

“The first time I set foot in Boston City Hall, I felt invisible,” Wu said. “Today I see what’s possible in this building.”

Wu ran on a progressive campaign which included a proposal for a fare-free T—one of the reasons she drew support from Tim Lasker, president of Local 453. As the MBTA’s second largest union, Local 453 was the first union to officially back Wu’s campaign.

“She is going to be one of the most dynamic and effective mayors that we’ve ever seen,” Lasker said.

On her first full day as mayor, Wu asked the city council for $8 million in funding to make three bus lines fare-free for two years.

Wu has also pledged to address inequality in Boston through affordable housing, a Boston Green New Deal, and a reimagined Boston Police Department.

During the ceremony, a small group protested the clearing of encampments at the intersection of Massachusetts Avenue and Melnea Cass Boulevard, the area known as Mass and Cass, which has become the center of the city’s opioid epidemic and homelessness crisis, highlighting another issue the new mayor will face.

Also on Wednesday, Wu announced that the city would be pausing the clearing while a Superior Court Judge considered a lawsuit from the American Civil Liberties Union. The suit was later dismissed by the judge, clearing the way for the city to resume the encampment clearing.

“[Wu] should follow through on her commitment to lead with public health and invest in evidence-based solutions,” Cassie Hurd, executive director of the Material Aid and Advocacy Program, said to The Beacon.

As city officials deliberate on plans to address the homelessness crisis, the issue remains at the forefront of many Boston residents’ minds.

“I want to see the Mass and Cass situation resolved in a more thought out way,” said Olivia Miller, a first-year journalism major at Emerson. “Homeless people have been treated very unfairly by Mayor Janey’s recent ordinance.”

In her farewell address last Wednesday, Janey touched on the crisis and said she felt “proud of our outreach teams for continuing the work of serving all of our residents and connecting people with services.”

For many, Wu’s election represents a signal of progress and a commitment to disrupting the status quo. First-year visual and media arts major Mahkye Hayden, who was drawn to Wu by her stance on affordable housing and transportation, said they expected the next few years to be transformative.

“Her background being Asian-American brings insight and a change of pace that I think is welcome,” Hayden said. “It seems like she very much cares about the people of Boston.”

Wu inherits a city emerging from over a year of economic strife from the pandemic. However, Pressley told The Beacon that the city was prepared for the future because of Janey’s tenure.

“The city will now be in a better position for a full recovery, and then to chart a brighter and more just path for the city of Boston,” Pressley said.

Danny Rivera, who interned for Janey when she was City Council President and sang at her farewell speech, predicted that the former mayor, who will return to her role as council president, would continue her commitment to the city of Boston in the future.

“I believe that while she’s passing the torch to Mayor-elect Wu, there is still work that she will do beyond political office,” Rivera said.

In her speech and when greeting attendees afterwards, Janey became emotional as she closed her time in office.

When considering the most memorable aspect about her term, Janey said to The Beacon, “[it’s] the people, connecting with residents all across Boston, every single neighborhood.”