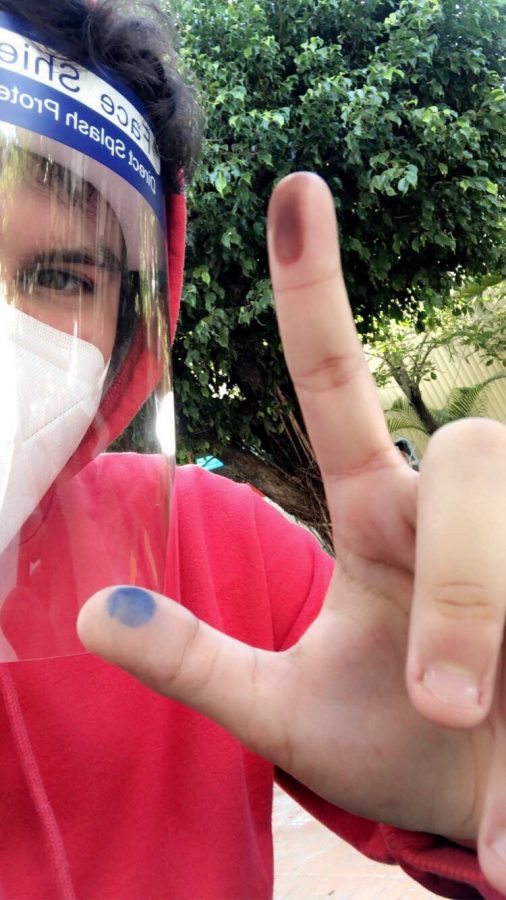 Jaime Vega Troncoso after voting in the Dominican Republic presidential election against the Dominican Liberation Party, which has held power for the last 16 years.

The coronavirus hit the island country amid their presidential election season. After being postponed for two months, elections were finally scheduled for July 5.

Though the country had recently become one of the biggest coronavirus hotspots in the Caribbean, mail-in voting was not an option. So, Vega Troncoso chose to step out to cast his ballot against the Dominican Liberation Party, the party that has governed the country for the past 16 years.

“They’ve been involved in so much corruption,“ Vega Troncoso said in a Zoom interview from Santo Domingo right before the election. “I do just want them to get the hell out of office.”

Vega Troncoso showed up to the polls wearing a mask and plastic face shield in order to safely vote for Modern Revolutionary Party Candidate Luis Abinader, who has since become the president elect.

While Vega Troncoso believes the government has been using their coronavirus response as a political tool to gain the public’s favor, he credits them for cracking down to limit the spread of the coronavirus by rolling out a 5 p.m. curfew and strict mask ordinances.

“The curfew has been well placed. Full respect to the government,” Vega Troncoso said, “But in my opinion, it’s just a ploy to make their campaign even better and just say, ‘Oh, we managed COVID very well.’”

Vega Troncoso doesn’t anticipate having any problems returning to campus, as there are currently no travel restrictions in place between the D.R. and U.S. He said he’s looking forward to leaving his country, as he’ll feel more comfortable in the presence of more young people.

“In Boston, I feel like I feel more safe because I think I’d probably be asymptomatic if I get it,” Vega Troncoso said. “I’ll be living in an apartment. It’s easier for me to quarantine. I won’t be exposing anyone in my close family.”