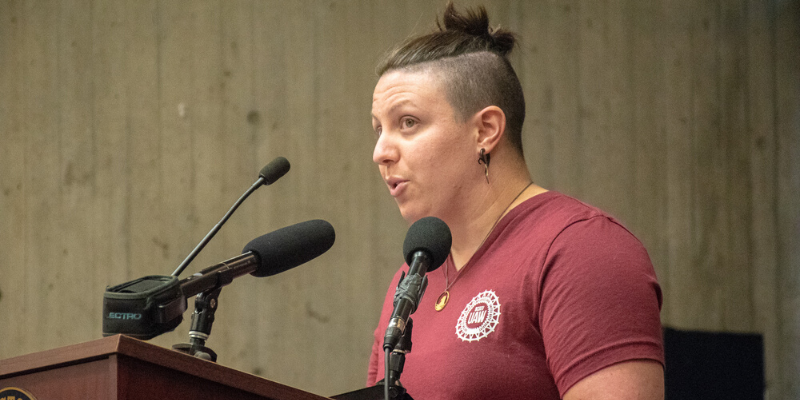 “I have been repeatedly told by my supervisor that I am expected to be in the lab working at least 60 hours a week. This is a job—graduate work is work,” Sam Levinson said. Anissa Gardizy / Beacon Correspondent

Boston-area graduate students spoke at City Hall Thursday to oppose a new federal rule that would prohibit them from unionizing.

Boston City Councilor Lydia Edwards hosted the press conference after drafting an April resolution to support graduate students at Boston College and sponsored a hearing in June 2019 on the issue.

The National Labor Relations Board proposed a rule in September that would ban collective bargaining by students by removing their status as employees. The NLRB is an independent federal agency with a five-member board that enforces labor laws about collective bargaining and unfair labor practices.

In a statement to The Beacon, Edwards said President Donald Trump and the NLRB are attacking workers across the country with the proposed rule. President Trump nominated three of the five current NRLB members.

She called on Boston colleges and universities to move forward with collective bargaining agreements on campus, regardless of the NLRB decision.

In September 2017, Boston College graduate workers voted in favor of a union—the college has yet to respond. Sam Levinson, a fourth-year Ph.D. candidate in the Chemistry Department at Boston College, said students are persistent in their demand for recognition because their issues are urgent and ongoing.

“We deal with low pay, inadequate health coverage, insufficient protections against harrassement and discrimination, and a myriad of other issues that need to be addressed,” she said at the press conference.

Levinson said a federal rule that would prohibit graduate student employee status—therefore excluding students from collective bargaining—would disrespect the work they do at their universities.

“I have been repeatedly told by my supervisor that I am expected to be in the lab working at least 60 hours a week. This is a job—graduate work is work,” Levinson said. “The Trump NLRB is attempting to prevent grad workers to have a say in the terms of their employment.”

If the proposed NLRB rule is passed, students who already have union contracts could lose those benefits when their contract ends. Tufts University ratified a five-year graduate student union contract last year.

The proposed rule change would take away the students’ right to have a union after those five years, an organizer of Tufts University’s graduate student union said.

Alec Drobac, a fourth-year graduate assistant in the Physics and Astronomy Department at Tufts, said at the press conference that the union contract helped open lines of communication between students and the institution. Tufts increased pay for the lowest-earning graduate students by about 15 percent, and they now offer 12-week paid parental leave because of the contract, Drobac said.

Edwards said she will file a resolution against the proposed NLRB rule and visit campuses to help students unionize.

“Our education institutions—[Boston College], Harvard, Northeastern, [Boston University]—are not even holding up their own values when it comes to their graduate student workers,” she said. “We are calling them out.”